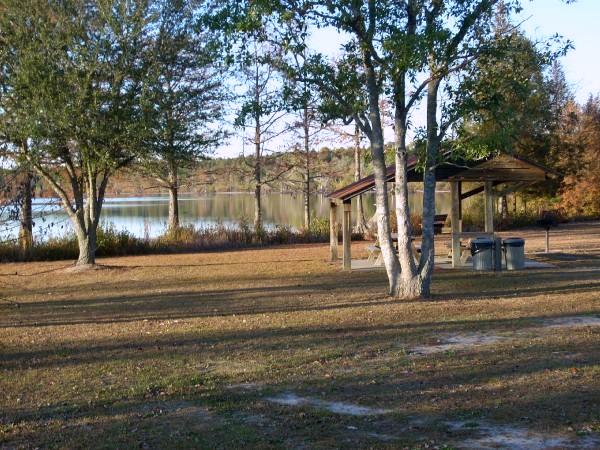 Jones Lake State Park is a North Carolina state park in Bladen County, in the in near Elizabethtown. It covers 2,208 acres (9 km²) and includes the natural lakes of and . Jones Lake State Park is north of Elizabethtown on in North Carolina's Coastal Plain region. The park offers year round recreation including , , , , king and environmental and historical education programs.

The area surrounding Jones and Salters Lakes at Jones Lake State Park was settled by migrants for in the late 1720s and early 1730s. Jones Lake was originally known as Woodward Lake a local . It was renamed Jones Lake for Isaac Jones a local land owner who donated the land on which Elizabethtown was built in 1773. Saltes Lake is named for an , Sallie Salter. Salter spied on Tories that were camped near Elizabethtown on the .

The government of the state of North Carolina began to take an interest in Jones and Salters Lakes and other Carolina Bays in the 1800s. The blocked all further private claims on lakes. Soon after, the state assembly pass legislation that granted ownership of all lakes greater than 500 acres (2.02 km²) in Cumberland, Columbus and Bladen Counties to the state. The formation of Jones Lake, Lake Waccamaw and s can be traced back to this piece of legislation.

The growth of the , and industries in the area of Jones Lake State Park eventually was greater than what the soil could support. The fertility of the farmland was depleted and most of the standing timber had been clear cut from Bladen County. The land could no longer support the demands of the people living on the land. Farmers were no longer able to produce sustainable crops and many were forced to leave their farms.

The began purchasing the land surrounding Jones and Salters Lakes in 1936 for a recreational demonstration project. Out of work young men were employed by the , which was established by in 1933 during the many of the facilities of Jones Lake State Park. The land was managed by the until 1939.

Jones Lake State Park was opened in 1939 during the segregation era as a for the use of s. The black communities of southeastern North Carolina used Jones Lake State Park for s, s, and church picnics. A result of racial segregation of the state park systems was that the parks for blacks were left largely underfunded and thereby undeveloped. The area in and surrounded Jones Lake remains largely wild and undeveloped offering visitors a chance to see two s in a nearly natural state.

Jones Lake State Park, like just convert|13|mi|km to the southeast, was used by soldiers training for at nearby for special anti-craft training. The state park also received national attention in 1980 when s gathered at the park to view a .

is one of a series of lakes that stretch from to along the . Exactly how the lakes were formed remains a mystery. What is known is that Jones Lake is not fed by any stream but relies entirely upon rain. The land beneath and surrounding the lake is mica-rich sandy clay and sand that is from the era with a thin layer of deposits covering it. This land is lower than the surrounding land and drains very poorly, creating Jones Lake.

Jones Lake is surrounded by a bay forest. This forest consists primarily of bay trees such as the loblolly, red bay, and . The understory consists of , leucothoe, and . , , and can be found at the higher elevations away from the shoreline.

The forests of Jones Lake State Park provide a habitat for a variety of animals that are fairly common to an eastern woodland habitat. , and rabbits can be spotted on from time to time. s live on the lake. s can be seen in the forest as can s, , and s. Jones Lake State Park is also home to s, fence lizards, , southern toads, s and s.

This park is also the place where the type specimen of "", a species of june beetle, was found and is currently the only known location for this species. [Citation| last = Polihronakis| first = Maxi | title = New Beetle Species Found At Jones| newspaper = The Steward| pages = 7| year = 2007| date = August| url = http://www.ncparks.gov/News/newsletter/stewards/August_2007.pdf]

Jones Lake State Park is open for year round recreation including camping, fishing, boating, hiking and enivronmental and historical education. Visitors to the park will find 20 campsites that are open for family camping. The sites are equipped with a and charcoal grill. Hot water showers are available at the park bath house. All campsites are available on a first come first served basis. The campground is closed November through February.

Jones Lake at Jones Lake State Park is open to recreational fishing and boating. All boats must be under convert|10|hp. s and paddleboats are available to rent at the boathouse through . The waters of the lake have a high acidity level due to the amount of vegetation that is decomposing and the build up peat on the lake bottom. The acid levels have limited the numbers of fish that inhabit Jones Lake and recreation fishing is in turn limited. , , and can be caught from the shore, pier and boats.

Bay Lake Trail is a five mile (8.05 km) hiking trail around Jones Lake. It passes through the forests that surround the lake. Side trails lead to the lake where visitors can observe pond cypress trees that are covered in . Bay Lake Trail begins at the picnic area and ends at the campground. A one mile (0.6 km) nature trail, the Cedar Loop Trail, passes through the bay forest and over a sand ridge.

Swimming and picnicking are the two most popular recreational activities at Jones Lake State Park. The large picnic area is near the swimming beach. There are 50 picnic tables, eight grills and a large pavilion. The beach is open Memorial Day through Labor Day.