Train surfing is riding or climbing ("surfing") on the outside of a moving train. This activity is illegal in many countries[citation needed] and is prohibited by administrative law. 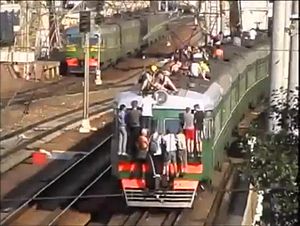 Train surfing is a common and a usual way to ride trains in India, Indonesia, and South Africa, although it can occur in any area with trains. Individuals may train surf to avoid the cost of a ticket or as a recreational activity. This practice is a serious issue in these countries where people have been killed or injured in accidents.

With the creation of the internet, the practice of filming the act and posting online videos of it is on the increase worldwide. While there are no official numbers, the London Underground is now running an advertising campaign against "tube surfing". The advertisements now at most underground stations show a female figure with one arm and the caption "she was lucky" next to it.

In Germany, the practice was made popular on TV in the 1990s. There it was called "S-Bahn Surfing". Slowly, the former train surfing culture changed and integrated into the German graffiti culture. The phenomenon was forgotten until the millennium, but in 2005 it was rediscovered by a group from Frankfurt, Germany. The leader of the crew who calls himself "the trainrider" famously surfed the InterCityExpress, the fastest train in Germany. An internet video claimed that he died a year later from an incurable form of leukemia, but later "the trainrider" revealed in an interview of Sat1 Akte 08 that this video was made by a fan and the story of his death was a hoax. S-Bahn Surfing is a risky undertaking - there were 40 dead teenagers in Germany in 2008 alone.[1]

An English teenager was killed after hitting a bridge while train surfing in November 2002.[2] A similar fate hit the Danish train surfer Martin Harris on 12 May 2007. After the incident, a campaign against train surfing was launched by two individuals.