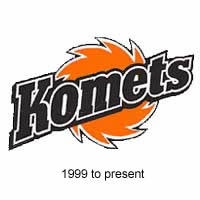 The Fort Wayne Komets are a minor league hockey franchise currently playing in the International Hockey League. The Komets played in the previous incarnation of the International Hockey League from 1952 until 1999, when they joined the (which took the IHL name in 2007). They have won five post-season championship titles in the IHL in 1963, 1965, 1973, 1993, and 2008 and one in the in 2003. They play their home games at the in .

The current Komets franchise replaced the original Fort Wayne Komets that relocated and became the in 1990 before folding in that same season. In all of North American professional hockey, only the teams of the NHL and the of the AHL have played continuously in the same city with the same name longer than the Komets.

* On , , the Komets set a new professional hockey record of 23 straight home wins. They defeated the 4–3.

*To see the full player roster and stats, click [http://www.pointstreak.com/framed/prostats/teamplayerstats.html?teamid=91754&seasonid=2122 here.] ** signifies the player is considered a veteran