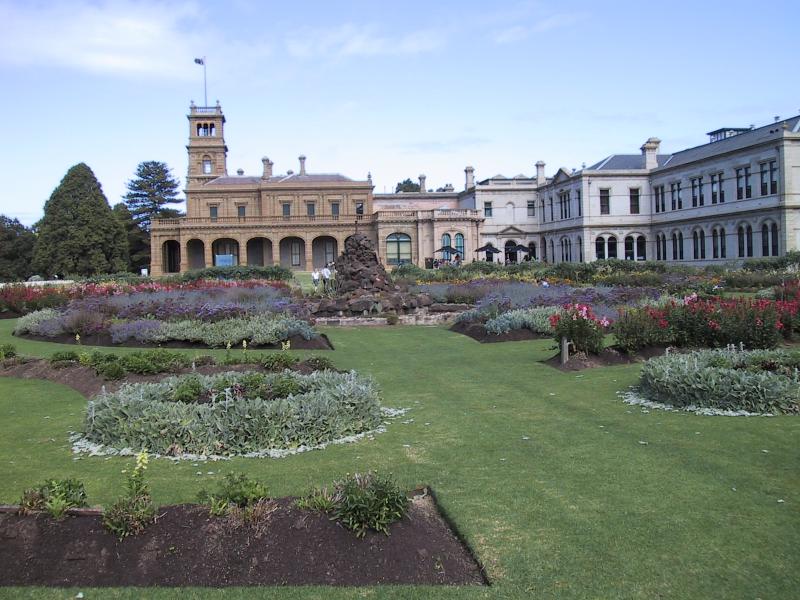 Werribee is a city near , Victoria, . Its local government area is the .

Werribee is about 32 km south-west of , located halfway to on the . It is also positioned on the , which starts to the north of the town of Ballan.

Early leasing of pastures was led by members of 's . A rural township began in the early 1850s. This village was named Wyndham (the name of the local municipality today). The name derived from a suggestion by the owner of a local village inn, , who sought to honour Scottish soldier Sir . The Post Office opened on 12 January 1858 as Wyndham and was renamed Werribee in 1904.

However, its adjacent river was called the , and the town's name was later changed to Werribee in 1884, and the shire council at that time was also renamed Werribee in 1909. The name Werribee is said to come from an Aboriginal word which meant spine or backbone, which described the curve of the Werribee River.

Werribee at this time was very popular for development. , a person famous in this area even today, was attracted to the open plain's suitability for agricultural uses. By 1863 he controlled more than 280 square kilometres around Werribee. Chirnside bought other smaller holdings of land at this time.

The town grew steadily, helped by a railway line from to , with a station at Werribee in 1857.

A religious school was opened in 1855 but was replaced by a public school in 1861. A church was also opened in the same year.

On , , the first council - the Wyndham Road District - was started, but was replaced by a shire council in 1864. The shire was huge, extending from the inner suburbs of to Little River near to to the northward town of Melton which covering 715 square kilometres.

Between 1860 and 1890, Werribee had two epicentres, the township and , owned by Chirnside. In 1878 a mansion was built and completed in Werribee Park, a major landmark today.

committed suicide in 1887, his brother dying three years later. The property was now divided between Andrew's two sons. A new mansion was built, called "The Manor" (Manor is the name of a suburb currently existing in Werribee, although not in the same place as the mansion.)

Soon after the Werribee property was passed on to the sons, the taxes meant that farmers would have to be used as tenants. In the early 1900s those 130 or so tenant farmers became freeholders of the land. The borrowed over 30 square kilometres for the Metropolitan Sewage Farm, the name later being shortened to Metropolitan Farm.

was improved in Werribee in the early 1900s. Italian ers, orchardists and poulterers started to move into Werribee soon after. In 1912, the Animal Research Institute was built.

Soldiers settling in Werribee after the first world war made their own farms, creating a new suburb called in 1925. In 1922 the Catholic Church purchased the Chirnside mansion, which then became Victoria's , Corpus Christi College. The Chirnside sons eventually left Werribee in 1928. About 3,000 people lived in the area at the time. A picture theatre and a primary school were also built. Werribee's prewar homes were clustered in a small area around central Werribee mostly south of the railway line.

During the First and Second World Wars, considerable military infrastructure was established in, or near, Werribee: permanent bases at Point Cook, Laverton and Avalon; temporary airfields; and munitions stores. During the second half of the 20th century the RAAF personal contributed greatly to the cultural and economic development of the community. Many small but solidly built three bedroom 'RAAF houses' remain in Laverton and the northern part of central Werribee.

After , Werribee had four hotels and churches, two savings banks (four including branch banks), market gardens and agricultural zones. Growth in this area was mostly limited to the east end (Altona) of the district, spreading to the rest of the shire in the 1960s, the population doubling in a decade. By 1971 Werribee housed 12,000 residents.

During this period, there were a number of scientific research facilities established in the region: The Board of Works Farm (researching sewerage treatment); the facility in Railway Avenue; the State Research Farm (renamed the Animal Research Institute); and the Veterinary Science School. Many teachers and scientists and engineers working in the petrochemical industry lived in Werribee, which at one stage was reputed to have more degrees per head of population than any other area in the state.

Farmland around Werribee was subdivided to form new suburbs, mostly north of the railway line. The oldest of these areas is between Market and Tarneit Roads. Houses are mostly privately built and may be timber or brick.

The area north to Shaws Road were developed in the 1950s and 60s. Cement homes surround Glen Devon Primary School near the river, while brick RAAF homes are more common east of Market Rd.

In 1970 a Catholic Secondary College, MacKillop College, was built on what had been part of the grounds of the Corpus Christi Catholic Seminary. In 1973 Corpus Christi was sold to the state government, and renamed . After 30 years of restoration and development, the property now includes the Open Range Zoo, the State Rose Garden, an Equestrian Centre, the restored Werribee Park Mansion and a luxury hotel.

By the mid-seventies the area's facilities included numerous sports grounds, pubs (hotels serving alcohol and meals), churches, primary and secondary schools and a hospital. Many students left school at 15. Some continued their studies at local secondary schools, some attended boarding school and many travelled to schools in Geelong or Melbourne. In 1978 the established what is it now main campus, Westbourne Grammar.

Those who went on to university and wished to continue living at home in Werribee had few choices: the , or . Travel time could be as much as 5 hours per day. This prompted the formation of the first planning committee for a University in the area. However, it took almost 20 years before a campus of Victoria University to be established in Hoppers Crossing.

For many years Werribee suffered a stigma due to the Melbourne Water sewage plant. Anyone from Werribee would invariably be at the receiving end of 'sewage farm' jokes. Public transport in the area was poor and infrastructure could not keep pace with demand. This kept house prices lower than that of Melbourne's suburbs.

These constraints were loosened when the West Gate bridge over the Yarra River reduced the driving time required to reach Melbourne's central business district to a mere 30 minutes.

Werribee's attractiveness as a commuter city was further boosted when the suburban electrified rail network was extended to Hoppers Crossing and Werribee in 1985. Previously Werribee was only served by less frequent diesel trains.

Wyndham Vale, Werribee east of Tarneit Road and Hoppers Crossing started to be developed from the 1970s, with modest brick veneer homes predominating. A small shopping centre and railway station opened at Hoppers Crossing in the 1980s. There is also extensive light industrial development along Princes Highway and further east at Laverton North.

In the 1990s, many of the research facilities were relocated to other regions and the bulk of the RAAF facilities were moved to Northern Australia. This impacted Werribee in several ways. Hundreds of RAAF-owned homes were dumped on the market, which depressed housing prices for several years. There was less pressure on local schools for a high-quality academic education, and schools changed their curricula to accommodate what were seen as the differing aspirations of the changed population. Local charitable, sporting and cultural organisations sorely missed the skills, contacts and enthusiastic participation of those supporters now lost to the community.

Werribee today remains a more self-contained city compared with outer suburbs of Melbourne. With a full range of schools, community facilities and shops (including the ever-expanding Werribee Plaza shopping centre) its residents seldom need to travel more than 3 or 4 kilometres except possibly for work. The old Werribee town centre located in Watton Street continues to thrive and has recently been nominated by the Victorian State Government as a major activity centre under the Melbourne 2030 urban plan. Following upgrades, the Melbourne Water plant's presence is not noticed, and indeed has become an asset, attracting diverse bird life.

Werribee today is the major centre within the City of Wyndham, one of Melbourne's fastest growing municipalities. Local facilities and cheap housing (2006 average house price $220 000) has made it popular with young families and first homebuyers. With Werribee now largely built out, most new housing in the area is being constructed at Wyndham Vale, Tarneit and Point Cook.

Werribee is growing by approximately fifty families per week. In 1994 the opened to provide hospital services to the growing population. It has always been a farming district.