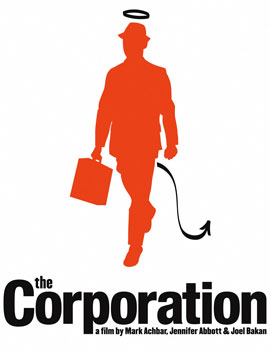 "The Corporation" is a 2003 Canadian critical of the modern-day , considering it as a class of and evaluating its behaviour towards society and the world at large as a psychologist might evaluate an ordinary person. This is explored through specific examples.

The film was written by , and co-directed by and . The documentary has been displayed worldwide, on TV and is also available on . Bakan wrote the book, "The Corporation: The Pathological Pursuit of Profit and Power" (ISBN 0-74324-744-2), during the filming of the documentary.

The film charts the development of the corporation as a legal entity from its origins as an institution chartered by governments to carry out specific public functions, to the rise of the vast modern institutions entitled to some of the legal rights of a person. One central theme of the documentary is an attempt to assess the "personality" of the corporate "person" by using diagnostic criteria from the DSM-IV; Robert Hare, a Psychology Professor and FBI consultant, compares the profile of the modern, profit-driven corporation to that of a clinically-diagnosed psychopath. The film focuses mostly on corporations in , especially in the .

The film is composed of several vignettes examining and critiquing corporate practices, and drawing parallels between examples of corporate malfeasance and the DSM-IV's symptoms of psychopathy, i.e. callous unconcern for the feelings of others, incapacity to maintain enduring relationships, reckless disregard for the safety of others, deceitfulness (repeated lying to and deceiving of others for profit), incapacity to experience guilt, and failure to conform to the social norms with respect to lawful behaviors.

Topics addressed include the , where in 1933, the popular General exposed a corporate plot against then U.S. President Franklin Roosevelt; the ; 's warning people to beware of the rising ; economic externalities; suppression of an investigative news story about on a affiliate television station; the role of in the Nazi holocaust; the brought on by the of 's municipal by the ; and in general themes of corporate social responsibility, the notion of limited liability, the corporation as a psychopath, and the corporation as a person.

The film also features interviews with prominent corporate critics such as , , , , , and as well as opinions from company s such as Ray Anderson (from the Interface carpet & fabric company), the capitalist viewpoints of and , and s advocating free markets such as the . Interviews also feature Dr. with his involvement in a lawsuit against for promoting the use of , (Monsanto's trade name for recombinant ) to induce more milk production in .

"The corporation is an externalizing machine (moving its operating costs to external organizations and people), in the same way that a shark is a killing machine." - Robert Monks, a corporate governance advisor in the film and former GOP (Republican) candidate for Senate from

"Variety" praised the film's "surprisingly cogent, entertaining, even rabble-rousing indictment of perhaps the most influential institutional model for our era" and its avoidance of "a sense of excessively partisan rhetoric" by deploying a wide range of interviewees and "a bold organizational scheme that lets focus jump around in interconnective, humorous, hit-and-run fashion." [ [http://www.variety.com/review/VE1117922025.html?categoryid=31&cs=1 The Corporation] , review by Dennis Harvey in "Variety", October 1, 2003]

In the "", described the film as "an impassioned polemic, filled with information sure to break up any dinner-table conversation." He felt that "at 145 minutes, it overstays its welcome. The wise documentarian should treat film stock as a non-renewable commodity." [ [http://rogerebert.suntimes.com/apps/pbcs.dll/article?AID=/20040716/REVIEWS/407160302/1023The Corporation] , review by in the "", July 16, 2004]

"" review suggests that the idea for an organization as a entity originated with , in regards to . Also, the reviewer remarks that the film weighs heavily in favor of as a solution to the evils depicted, while failing to acknowledge the magnitude of evils committed by in the name of , such as those of the Communist Party in the former . [ [http://www.economist.com/business/displayStory.cfm?story_id=2647328 The lunatic you work for] , review in "", May 6, 2004]

The , in their review criticizes the film for the opposite: for depicting the in an unfavourable light, while adopting an approach favoring direct democracy and without emphasizing the need for a centralized bureaucracy. The film, in their view "offers no realistic alternative to imperialism." and "it shares some of the strengths and downfalls" of 's film "", which celebrates the life of anarcho-syndicalist, linguist, and . In their view, "corporate power for profit [is] not the same as megabureaucracy without profit." [cite web |url = http://www.etext.org/Politics/MIM/movies/long/corporation.html |title = "The Corporation" offers no real world solutions or choices |accessdate = 2008-05-27 |publisher = ]

Books mentioned in the film