There are various Mausoleums of Multan due to Multan's rich heritage of pirs and saints, the city also has many mausoleums and shrines. Here are some of the best-known mausoleums that can still be visited today. 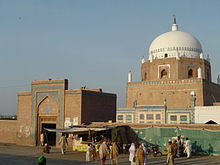 Standing at the north-eastern fringe of the ancient fort of Multan, is the eternal abode of Al-Sheikh Al-Kabir Sheikh-ul-Islam Baha-ud-Din Abu Muhammad Zakaria Al-Qureshi Al-Asadi, one of the greatest saints of the Suhrawardiya Silsila and one of the most distinguished disciples of Sheikh Al-Shuyukh Shahab Al-Din Suhrawardy. He was the founder of Suhrawardiya Silsila in the Sub-Continent. He was born in 1170.

Sheikh Baha-ud-Din Zakariya known as Bahawal Haq was born at Kot Kehror, a town of Layyah District near Multan, around 1170. For 15 years he went from place to place to preach Islam and after his wanderings Bahawal Haq settled in Multan in 1222. He died in 1267. The Mausoleum is a square of 51 feet 9 inches (15.77 m), measured internally. Above this is an octagon, about half the height of the square, which is surmounted by a hemispherical dome. The Mausoleum was almost completely ruined during the siege of 1848, but was soon afterwards restored by the Muslims. 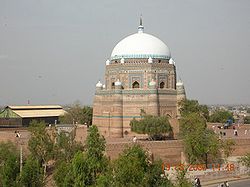 The tomb of Shah Rukn-i-Alam grandson of Shaikh Bahauddin Zakaria, which was built between 1320 and 1324, is an unmatched pre-Moghul masterpiece. The Mausoleum of Rukn-i-Alam could possibly be considered the glory of Multan.

From whichever side the city is approached, the most prominent thing that can be seen from miles all around is a huge dome. This dome is the Shrine of Sheikh Rukn-ud-Din Abul Fath commonly known by the title Rukn-i-Alam (pillar of the world). The tomb is located on the southwest side of the Fort premises. This elegant building is an octagon, 51 feet 9 inches (15.77 m) in diameter internally, with walls 41 feet 4 inches (12.60 m) high and 13 feet 3 inches (4.04 m) thick, supported at the angles by sloping towers. Over this is a smaller octagon 25 feet 8 inches (7.82 m), on the exterior side, and 26 feet 10 inches (8.18 m) high, leaving a narrow passage all round the top of the lower story for the Moazzan, or public caller to prayers. The whole is surmounted by a hemispherical dome of 58 feet (18 m) external diameter. The total height of the building, including a plinth of 3 feet (0.91 m), is 100 feet (30 m). As it stands on the high ground, the total height above the road level is 150 feet.

Besides its religious importance, the mausoleum is also of considerable archaeological value as its dome is reputed to be the second largest in the world, after 'Gol Gumbad' of Bijapur (India), which is the largest. The mausoleum is built entirely of red brick, bounded with beams of shisham wood, which have now turned black after so many centuries. The whole of the exterior is elaborately ornamented with glazed tile panels, string courses and battlements. Colors used are dark blue, azure, and white, contrasted with the deep red of the finely polished bricks. The tomb was said to have been built by Ghias-ud-Din Tughlak for himself, but was given up by his son Muhammad Tughlak in favour of Rukn-i-Alam, when he died in 1330.

The mausoleum of Shams-ud-Din, commonly known as Shah Shams Tabrez, is located about half a mile to the east of the Fort site, on the high bank of the old bed of the River Ravi near Aam-Khas Garden. He was a descendant of Imam Jaffer sadiq (as) and was born in 1165. He died in 1276 and the shrine was built by his grandson in 1330. The tomb is square, 30 feet (9.1 m) in height surmounted by a hemispherical dome. It is decorated with ornamental glazed tiles.

Within the city of Multan Pakistan there is a shrine of Hazrat Muhammad Shah Yusaf Gardezi commonly known as Shah Gardez just inside the Bohar Gate. It is a rectangular domeless building decorated with glazed tiles, a work of considerable beauty. He came to Multan in 1088 and revitalized the then-dead city. Shah Yousaf Gardez converted many people to Islam and performed numerous miracles which can be found in history books. His descendants are known as Gardezis and are one of the few old noble families in the country.

The famous historian Arnold J. Toynbee in his book "Between Oxus and Jumna" writes,

"………the tomb under whose shadow I am now writing ….. is the tomb of Shah Yousaf Gardezi. I am being entertained in the Gardezi family's 'Dewan-Khanah', their family guest house, and the tomb, with the tombs of the saints descendants clustering round it, is only a stone's-throw away. Being named Joseph, I (like Stalin) am this saint's namesake, but I cannot claim also to be a 'Shah'; for, in Pakistan, 'Shah' signifies a Sayid: that is to say, a descendant of the Prophet Muhammad (Salalla ho Alihey Wa Aaley hi Wassallam).

The legend declares that, nine hundred years ago, Shah Yousaf Gardezi came riding into Multan on a lion, with a live snake for a whip and a pair of pigeons fluttering over his head. He had ridden his lion all the way from Gardez in Afghanistan, and he had bought with him the teaching of the Twelve-Imam branch of Shi'ah sect of Islam (the form of Shi'ism that today is the national religion of Persia). In the course of Nine Hundred years both the saint's descendants and the pigeon's descendants have multiplied exceedingly. This whole quarter of the city (Multan) is now occupied by the houses of the Gardezis and the Gardezis' cousins' cousins. As for the Pigeons, they live on the Gardezis' roofs and cluster, in force, on the Gardezis' Saintly ancestor's tomb. The tomb is cased in blue tiles, dating from the reign of Mughal Emperor Humayun, and at intervals there are apertures in the tile works, opening into cavities specially provided to give the pigeons a lodging as close as possible to the spot where the saints' body lies. It is a pretty sight to see them poking in and out, for all the world as if the tomb has been built solely for their benefits.

The Mausoleum is situated near Aam Khas garden outside Daulat Gate, Multan. The tomb has been built within a wall resembling a fortification. The tomb lies on a platform of marble and is surrounded by an area paved with marble and black slate. On the North and West side there is an arched corridor which looks like a tunnel. On the south side there is an extensive congregational hall, whose timber roof is embellished with decorative work.

Hazrat Hafiz Muhammad Jamal was born in Multan about 1747 AD (1160 AH). His father's name was Hafiz Muhammad Yusuf, that of his grand father Hafiz Abdul Rashid. He belonged to Awan tribe. He memorized the Holy Qur'an when he was still very young. He also studied religious and philosophical sciences. In the student days he used to excel and no one could oppose him in debates. As he advanced in years he felt attracted towards mystical meditation. He found a perfect guide and became disciple of Qibla-e-Aalam Hazrat Nur Muhammad Maharvi, a prominent sufi saint of Chishti order.

Hafiz Muhammad Jamal also learnt and mastered martial arts. Not merely an expert archer himself, he also used to instruct and train the soldiers. He was a unique sufi saint who was an eminent scholar, poet and a warrior as well. He used to fight and lead soldiers of Nawab Muzaffar Khan, ruler of Multan, against forces of Ranjeet Singh who attacked the city many times yet could not capture the fort and city during the lifetime of Hafiz Jamal.

The most reliable source of life history of Hafiz Muhammad Jamal is the book 'Jamalia" written by Maulvi Abdul Aziz Parharvi. As described in the book, Hafiz Muhammad Jamal was radiantly handsome, his teeth were unstrung pearls, his nose marvelously comely, his eyebrows thin, his chin pointed and his beard was extremely graceful. He used to walk at such a pace that young men were unable to keep up with him.

He had a ring, upon which were engraved the words "Allahu jamilun wa yohibbul jamal' (God is beautiful and loves beauty). His discourse used to be most sweet and agreeable. In his life there was no contradiction between preaching and practice. History testifies that very many Hindus also benefited from his teachings and he never acted in a discriminatory way towards them. It is undoubtedly true that after the great Bahauddin Zakariyya Multani it was the Suhrawardi order which flourished in the region. Hafiz Jamal was the first saint to give currency to the Chishti order of sufism in Multan. He also established a very important centre of learning.

Hafiz Jamal died at the age of 66 on 5 Jamadi ul Sani 1226 (7 May 1811). A chronogram for the date of his death was derived by his beloved pupil Munshi Ghulam Hassan from these words of Holy Qur'an: "innl muttaqin fi jannat". Two other chronograms in Persian verses are also inscribed over the eastern gate of the tomb. He married twice and one of his wife was from Laang family. He had a considerable number of spiritual successors such as Khwaja Khuda Bakhsh of Khairpur Tamiwali.

Hafiz Jamal was an excellent poet in Arabic, Persian and Siraiki. His "Seeharfi" is a poem in Siraiki which comprises 29 stanzas of four rhyming lines each, the fourth containing the poet's name 'Jamal'. In this Hafiz Jamal uses the spinning wheel and its appurtenances as symbols of deeds and character. Copy of this 'Seeharfi' is available in the Punjab University Library. It was also once published in Agra, India. Very many accounts of Hafiz Jamal and his sayings were composed, many of which exist in the earlier books. The best known are i) 'Fazail Raziyya', ii) 'Jamalia' , iii) 'Gulzar-e-Jamlia' written in 1325/1907, and iv) 'Anwar-e-Jamlia'. Now many more books have been written.

Other Mausoleums and Tombs

In addition to the tombs mentioned above, Multan has several other historical and archaeological remains of the Muslim period. Prominent among these are:

Shahadna Shahaid is located near Delhi Gate and is the shrine of a faithful disciple of 'Bahaul Haq'.

The Mausoleum of Bibi Pak Daman is located near Basti Daira.

Shah Ali Akbar, a descendant of Shah Shams Sabzwari. He was the grandson of Hazrat Shah Shams. His mausoleums is situated in Shia Miani Multan.

The long brick tombs generally known as Nuagaza tombs, or the "nineyarder tombs". This term is generally applied, in the sub-continent, to the warriors and martyrs of Islam who, at the time of the early invasions of the Muslims fell in action against the Hindus.

Outside the Delhi Gate, nearly twelve yards (351/2 feet to be exact) in length, there is a stone of chocolate color with marks of light yellow on it, 27 inches in diameter and 78 inches (2,000 mm) thick, with a hole through the middle 9 inches (230 mm) in diameter. It is called Manka. People say the saint wore it round his neck, while some maintain that it was his thumb ring. The tomb is asserted to be 1300 years old. It is possible that it may belong to the times of the early Muslim invasion under Mohammad -bin-Qasim.