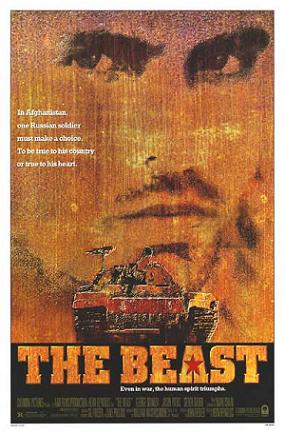 "The Beast" (also: "The Beast of War") is a 1988 war film directed by and based on a play entitled "". The plot concerns a Soviet tank lost during the Soviet invasion of Afghanistan.

In , a unit in destroys a village, before one of the tanks commanded by the ruthless Commander Daskal () gets separated from the unit, and enters a valley.

Taj () returns to discover the village destroyed, and his brother gruesomely executed by being crushed under the by the retreating Soviet forces. As the new khan, following his brother's death, Taj is spurred to seek revenge by his cousin, the scavenger Mustapha - and together they lead a band of fighters into the valley to pursue the separated tank, counting on their to destroy the tank.

The tank crew is made up of four Soviets and one Afghan. As night falls and the crew sets up camp, the Afghan tank crewman Samad () teaches the tank driver, Konstantin Koverchenko (), about the fundamental principles of "", the 's code of honour: "melmastia" (hospitality), "badal" (revenge), and "", which requires even an enemy to be given if he asks (see Primary concepts in Pashtunwali).

We soon see that Commander Daskal, called "Tank Boy" during the for destroying a number of German tanks when he was eight years old in the , is ruthless not only to the enemy, but also to his men. He despises Samad and kills him on the pretext of suspecting him of collaborating with the mujahideen.

After Koverchenko threatens to report Daskal for the killing, Daskal orders the other two crewmen to tie Konstantin to a rock, with a grenade behind his head to serve as for the mujahadeen. Some wild dogs come upon him and as Konstantin tries to kick at them, the grenade rolls down the rock and explodes, killing several dogs but leaving Konstantin unhurt.

A group of women from the village, who had been trailing the mujahideen to offer their support, come across Koverchenko and begin to stone him, calling for his blood as revenge. As the mujahideen approach, Koverchenko remembers the term "" (sanctuary) and repeats it until Taj cuts him free, and allows him to follow their procession. That night, hidden in a cave, the fighters eat - and Taj asks Koverchenko if he will fix their broken RPG-7, and help them destroy the tank.

As the remaining three members of the tank crew begin to realize they are trapped in the valley, a Soviet appears and offers to rescue them. Daskal, caring more for his tank than his men, refuses the offer and simply refills the vehicle's oil and gasoline. They get their bearings from the helicopter pilot and head back into a narrow mountain pass, looking for the way out of the valley. The mujahadeen and Konstantin catch up with them and fire their last RPG round, but hit only the main gun. Just as it seems the tank will escape, an explosion in the cliffs above the tank sets boulders rolling onto it, disabling it at last. The explosion was set off by the village women.

The tank crew is forced out and Konstantin pleads "" on their behalf. Taj reluctantly agrees. Konstantin tells Daskal that he wants him to live to see the Soviets lose the war, which is "no Stalingrad", and states that "It's hard to be a good soldier in a rotten war...how is it that we're the Nazis this time?" The men flee on foot, but Daskal meets up with the women, who carry out their revenge by him. Meanwhile, a rescue helicopter appears and despite the camaraderie that has developed, Konstantin goes with the helicopter. Taj orders his men not to fire on him as he is being hoisted up into the helicopter. Before he was hoisted up to the helicopter, Koverchenko salutes Taj by holding an old flintlock musket Taj gave to him earlier on above his head and the film ends with Koverchenko being hoisted up to the flying helicopter with the musket still in his hands.

*Several actual tanks were used in the film although the helicopter used in the film was not a real , it was an . The tank in question in the movie is actually an Israeli modification of a captured Soviet T-55, redesignated as the Ti-67. Many of these conversions were used by the Israelis during the 1973 war against Egypt. The film's military advisor, , has written that he negotiated the purchase of the tanks over drinks with officers in a hotel. [http://www.warriorsinc.com/FilmThoughts.cfm?ProjectID=7]
*Throughout the entire movie, the only Russian accents were the ones heard on the music radio.
*The language spoken by the Afghan characters is . The Pashtu dialogue is subtitled but some television screenings have omitted the subtitles. [http://www.imdb.com/title/tt0094716/alternateversions]
*The character Moustafa wore Soviet medals, including the , the Soviet Army 20 year service medal, the , , and a couple of others, all of which were scavenged from dead Soviet troops.
*At one point during the movie, Konstantin mentions that among other problems they are getting low on . This is inaccurate, as all T-54/55 models are actually -fueled.
*Dzundza, notable for being quite heavyset in his other performances before and after The Beast, appears in this film to have undergone extensive physical training to fit the role convincingly, as being a tanker would require him to be much thinner and more athletic.
*By radio the song is the "Trolley bus", the most popular group of the Soviet Union - Kino.
*The machine gun that was attached on top of the T-55 was actually a dressed up to look like a .

*"Tank boy, this is not Stalingrad!"

*"You can't be a good soldier in a rotten war."

*"Out of commission, become a pillbox. Out of ammo, become a bunker. Out of time, become heroes."