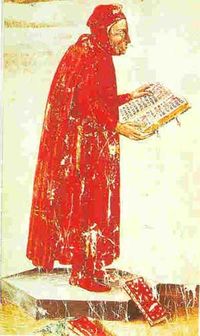 Coluccio Salutati (February 16, 1331 – May 4, 1406)[1] was an Italian Humanist and man of letters, and one of the most important political and cultural leaders of Renaissance Florence.

Salutati was born in Stignano, near Buggiano (today's province of Pistoia, Tuscany). After studies in Bologna, he began to work as notary in that town, then part of the Republic of Florence. His letters to Florentine scholars earned him the nickname of "Ape of Cicero",[2] referring to his mastership of Latin style. Francesco Bruni took Salutati with him in Rome from 1368 to 1370, as assistant in the Papal secretacy. Having his career boosted by his stay in Rome, he was therefore appointed chancellor of Todi and then of the powerful Lucca.

In 1375 Coluccio was appointed Chancellor of Florence, the most important position in the bureaucracy of the Florentine Republic. In his position, Salutati was responsible for the official correspondences with other states. His abilities as a statesman were soon tested as Florence was immediately faced with war with the papacy.[3] Salutati was charged with addressing pope Gregory XI to assure him that Florence was still a loyal member of the Guelf party.[4] Although he failed to prevent war with the papacy, Salutati soon became the most celebrated chancellor in all of Italy and a master of the formal letter. Florence's principle nemesis during his tenure, Giangaleazzo Visconti once remarked that one of Salutati's letters could "cause more damage than a thousand Florentine horsemen."[5] During his life, Florence warred twice against its powerful northern rival, Giangaleazzo Visconti, Duke of Milan. His treatise De tyranno ("On the tyrant", published in 1400), has, most likely, its model in Visconti, although in it Salutati (despite being a republican) remains a supporter of the providential universal monarch already put forward by Dante.[6] Occasionally his letters had unintended consequences. When he wrote the people of Ancona, asking them for military support against the pope, he called to mind the evils Italy had suffered on behalf of the French. Word of his nasty tone got to the King of France, which prompted a switch and most conciliatory letter from Salutati, assuring the King that he meant no harm and that Florence would always be a friend to France.[7] In testament to his popularity as chancellor the city of Florence paid 250 Florins for his funeral in 1406.[8]

Coluccio's cultural achievements are perhaps even greater than his political ones. A skilled writer and orator, Coluccio drew heavily upon the classical tradition. An admirer of Petrarch, he spent much of his salary on amassing a collection of 800 books, a large library by the standards of the time. He also pursued classical manuscripts, making a number of important discoveries, the most important being Cicero's lost Letters to his Friends (Epistulae ad familiares), which overturned the entire medieval conception of the Roman statesman. Coluccio also did important studies of history, tying Florence's origin not to the Roman Empire but to the Roman Republic. In his lifetime, the study of secular literature, especially pagan literature, was discouraged by the Roman Catholic Church. Coluccio played an important part in changing this outlook, frequently engaging in theological debates on the merits of pagan literature with Church officials.

He also brought the Byzantine scholar Manuel Chysoloras to Florence in 1397 to teach one of the first courses in Greek since the end of the Roman Empire. After Boethius, few Westerners spoke or read Greek. Many ancient Greek works of science and philosophy were not available in Latin translation. By Salutati's time, a few Latin texts of Aristotle had arrived in Europe via Muslim Spain and Sicily. These texts, however, had been translated from Arabic, rather than directly from the Greek. By bringing Chrysoloras to Florence, Salutati made it possible for a select group of scholars (including Bruni and Vergerio) to read Aristotle and Plato in the original ancient Greek.[9]

He promoted the work of younger humanists such as Gian Francesco Poggio Bracciolini, Leonardo Bruni and Pier Paolo Vergerio.[10]