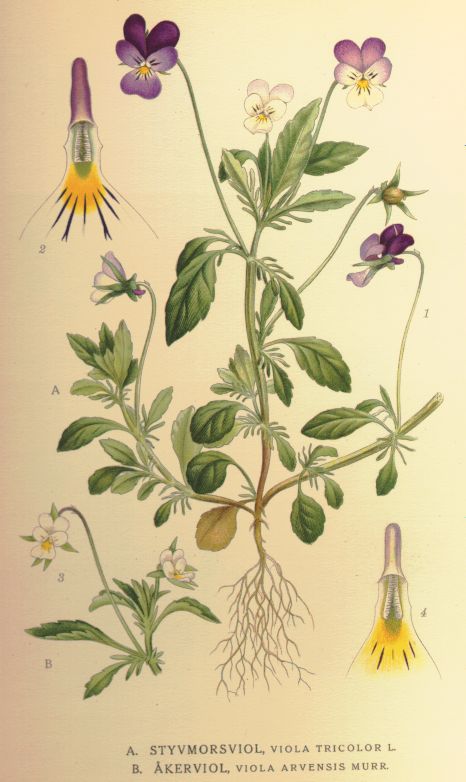 "Heartsease redirects here, for the place, see or "

Heartsease ("Viola tricolor") is a common an wild flower, growing as an annual or short-lived perennial. It has been introduced into , where it has spread widely, and is known as the Johnny Jump Up (though this name is also applied to similar species such as the ). It is the progenitor of the cultivated , and is therefore sometimes called Wild Pansy; before the cultivated Pansies were developed, "Pansy" was an alternative name for the wild form.Heartsease is a small plant of creeping habit, reaching at most 15 cm in height, with flowers about 1.5 cm in diameter. It grows in short grassland on farms and wasteland, chiefly on acid or neutral soils. It is usually found in partial shade. It flowers from April to September. The flowers can be purple, blue, yellow or white. They are and self-fertile, pollinated by bees.

As its name implies, Heartsease has a long history of use in . It has been recommended, among other uses, as a treatment for , , skin diseases and . It has expectorant properties, and so has been used in the treatment of chest complaints such as and . It is also a , leading to its use in treating and .

The flowers have also been used to make yellow, green and blue-green s, while the leaves can be used to make a chemical .

Long before cultivated pansies were developed, Heartsease was associated with thought in the "", often by its alternative name of pansy (from the French "pensée" - thought): hence Ophelia's often quoted line in Shakespeare's "", "There's pansies, that's for thoughts". What Shakespeare had in mind was Heartsease, not a modern garden pansy.

Shakespeare makes a more direct reference to Heartsease in "". sends to gather "a little western flower" that maidens call "Love-in-idleness". Oberon's account is that he diverted an arrow from 's bow aimed at "a fair , throned by the west" (supposedly ) to fall upon the plant "before milk-white, now purple with love's wound". The "imperial vot'ress" passes on "fancy-free", destined never to fall in love. The juice of the heartsease now, claims Oberon, "on sleeping eyelids laid, Will make or man or woman madly dote Upon the next live creature that it sees." Equipped with such powers, Oberon and Puck control the fates of various characters in the play to provide Shakespeare's essential dramatic and comic structure for the play.

Heartsease has a large number of alternative colloquial names, up to two hundred.

Heartsease is also the title of a book in trilogy, written by .