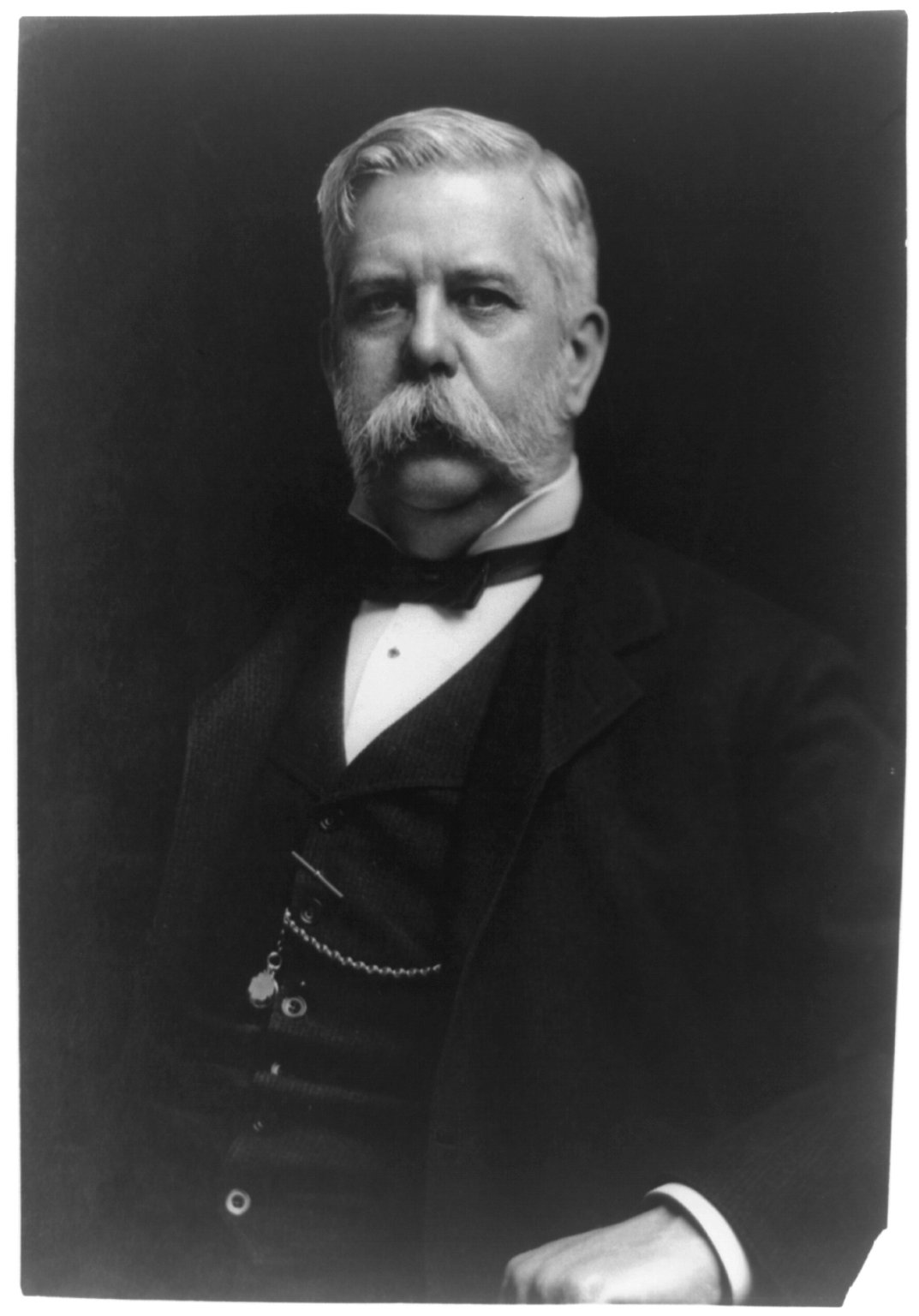 George Westinghouse, Jr ( &ndash; ) was an American and who invented the railroad air brake and was a pioneer of the electrical industry. Westinghouse was one of 's main rivals in the early implementation of the American electricity system. Westinghouse's system using alternating current ultimately prevailed over Edison's insistence on direct current. In 1911, he received the AIEE's 'For meritorious achievement in connection with the development of the alternating current system light'.

Westinghouse was the son of a machine shop owner and was talented at machinery and business. He was only 19 years old when he created his first invention, the rotary steam engine.

Thomas Edison was one of his main rivals due to the fact that they were both very intelligent inventors. At about this time he witnessed a train wreck where two engineers saw one another but could not stop their trains in time using the brakes then available. Brakemen ran from car to car, often on top of the cars, and applied the brakes manually on each car.

In 1869 at age 22 he invented a railroad braking system using compressed air. The Westinghouse system used a compressor on the locomotive, a reservoir and a special valve on each car, and a single pipe running the length of the train (with flexible connections) which both refilled the reservoirs and controlled the brakes, applying and releasing the brakes on all cars simultaneously. It is a failsafe system in that any rupture or disconnection in the train pipe will apply the brakes throughout the train. It was patented by Westinghouse on March 5, 1872. The Westinghouse Air Brake Company (WABCO) was subsequently organized to manufacture and sell Westinghouse's invention. It was in time nearly universally adopted. Modern trains use brakes in various forms based on this design.

Westinghouse pursued many improvements in railroad signals (then using oil lamps) and in 1881 he founded the Company to manufacture his signaling and switching inventions.

Electricity and the "War of Currents"

In 1875, Thomas Edison was still a relative unknown in the United States. He had achieved some success with a "multiplex telegraph" system that allowed multiple telegraph signals to be sent over a single wire, but had not yet obtained the recognition he wanted. He was working on a telephone system but was upstaged by Bell. Edison bounced back quickly from the setback to invent the , which brought him renown.In 1878 Edison invented an improved , and realized the need for an electrical distribution system to provide power for lighting. On September 4 1882, Edison switched on the world's first electrical power distribution system, providing 110 s (DC) to 59 customers in lower , around his laboratory. Lewis Latimer received a patent for an improved process for manufacturing the carbon filaments in light bulbs. These improvements reduced the manufacturing time and increased quality. During his life he had worked with and for Alexander Bell, Hiram Maxim and Thomas Edison.

Westinghouse's interests in gas distribution and telephone switching logically led him to become interested in electrical power distribution. He investigated Edison's scheme, but decided that it was too inefficient to be scaled up to a large size. Edison's power network was based on low-voltage DC, which meant large currents and serious power losses. Several European inventors were working on " (AC)" power distribution. An AC power system allowed voltages to be "stepped up" by a for distribution, reducing power losses, and then "stepped down" by a transformer for use.

A power transformer developed by of and of was demonstrated in in 1881, and attracted the interest of Westinghouse. Transformers were not new, but the Gaulard-Gibbs design was one of the first that could handle large amounts of power and had ease of manufacture. In 1885, Westinghouse imported a number of Gaulard-Gibbs transformers and a Siemens AC generator to begin experimenting with in .

Assisted by William Stanley, and , Westinghouse worked to refine the transformer design and build a practical AC power network. In 1886, Westinghouse and Stanley installed the first multiple-voltage AC power system in . The network was driven by a generator that produced 500 volts AC. The voltage was stepped up to 3,000 volts for transmission, and then stepped back down to 100 volts to power electric lights. The problems inherent in the new AC system were highlighted when Mr. Pope was electrocuted by a malfunctioning AC converter in the basement of his home. [ [http://www.telegraph-history.org/pope/page8.htm Franklin Pope Killed by Electricity] ] That same year, Westinghouse formed the "Westinghouse Electric & Manufacturing Company", which was renamed the "Westinghouse Electric Corporation" in 1889.

Thirty more AC lighting systems were installed within a year, but the scheme was limited by the lack of an effective metering system and an AC . In 1888, Westinghouse and his engineer developed a power meter, with a design that mimicked a gas meter. The same basic meter technology is still used today. An AC motor was a more difficult task, but fortunately a design was already available. The brilliant n-American inventor had already devised the principles of a polyphase electric motor.

Tesla and Edison did not get along well. Earlier Tesla had worked for the Edison General Electric company in Europe, but was unpaid for his service and had to go into labour for a few years. Later, Edison promised Tesla $50,000 if he could redesign his DC electrical dynamos. When Tesla did this, Edison told Tesla that he had been joking about the money. Edison and Tesla quickly parted company.Westinghouse got in touch with Tesla, and obtained rights to Tesla's AC motor. Tesla had conceived the principle in 1882 and used it to invent the first brushless AC motor or in 1883. Westinghouse hired him as a consultant for a year and from 1888 onwards the wide scale introduction of the polyphase AC motor began. The work led to the modern US power-distribution scheme: three-phase AC at 60 Hz, chosen as a rate high enough to minimize light flickering, but low enough to reduce reactive losses, an arrangement also conceived by Tesla.

Westinghouse's promotion of AC power distribution led him into a bitter confrontation with Edison and his DC power system. The feud became known as "the ." Edison claimed that high voltage systems were inherently dangerous. Westinghouse replied that the risks could be managed and were outweighed by the benefits. Edison tried to have legislation enacted in several states to limit power transmission voltages to 800 volts, but failed.

The battle went to an absurd level when, in 1887, a board appointed by the state of New York consulted Edison on the best way to execute condemned prisoners. At first, Edison wanted nothing to do with the matter.Westinghouse AC networks were clearly winning the battle of the currents, and the ultra-competitive Edison saw a last opportunity to defeat his rival. Edison hired an outside engineer named , who could pretend to be impartial, to perform public demonstrations in which animals were electrocuted by AC power. Edison then told the state board that AC was so deadly that it would kill instantly, making it the ideal method of execution. His prestige was so great that his recommendation was adopted.

Harold Brown then sold gear for performing electric executions to the state for $8,000. In August 1890, a convict named became the first person to be executed by electrocution. Westinghouse hired the best lawyer of the day to defend Kemmler and condemned electrocution as a form of "cruel and unusual punishment". The execution was messy and protracted, and Westinghouse protested that they could have done better with an axe. The became a common form of execution for decades, although it had been proven to be unsatisfactory for the task. However, Edison failed in his attempts to have the procedure named "Westinghousing".

Edison also failed to discredit AC power, whose advantages outweighed its hazards. Even , which absorbed Edison General Electric in 1892, decided to begin production of AC equipment.

In 1889, Westinghouse hired (1864-1924) electrical engineer and inventor. Interested in mechanics and mathematics from childhood, Lamme graduated from with an engineering degree (1888). Soon after joining Westinghouse Corp, he became the company's chief designer of electrical machinery. His sister and fellow Ohio State gradutate, Bertha Lamme (1869-1943), the nation’s first woman electrical engineer, joined him in his pioneering work at Westinghouse until her marriage to fellow Westinghouse engineer, Russel Feicht. Among the electrical generating projects attributed to Bertha Lamme is the turbogenerator at . The New York, New Haven and Hartford Railway adopted the Lamme’s single-phase electric rail system in 1905. Benjamin Garver Lamme was Westinghouse's trusted chief engineer from 1903 until his death.

In 1893, in a significant victory, the Westinghouse company was awarded the contract to set up an AC network to power the in , giving the company and the technology widespread positive publicity. Westinghouse also received a contract to set up the first long-range power network, with AC generators at producing electricity for distribution in , 40 kilometers (25 miles) away.

With AC networks expanding, Westinghouse turned his attention to electrical power production. At the outset, the available generating sources were hydroturbines where falling water was available, and reciprocating s where it was not. Westinghouse felt that reciprocating steam engines were clumsy and inefficient, and wanted to develop some class of "rotating" engine that would be more elegant and efficient.

In fact, one of his first inventions had been a rotary steam engine, but it had proven impractical. British engineer began experimenting with steam turbines in 1884, beginning with a 10 horsepower (7.5 kW) unit. Westinghouse bought rights to the Parsons turbine in 1885, and improved the Parsons technology and increased its scale.

In 1898 Westinghouse demonstrated a 300 kilowatt unit, replacing reciprocating engines in his air-brake factory. The next year he installed a 1.5 megawatt, 1,200 rpm unit for the .

Westinghouse then developed steam turbines for maritime propulsion. Large turbines were most efficient at about 3,000 rpm, while an efficient propeller operated at about 100 rpm. That required reduction gearing, but building reduction gearing that could operate at high rpm and at high power was difficult, since a slight misalignment would shake the power train to pieces. Westinghouse and his engineers were able to devise an automatic alignment system that made turbine power practical for large vessels.Westinghouse remained productive and inventive almost all his life. Like Edison, he had a practical and experimental streak. At one time, Westinghouse began to work on s that could provide heating and cooling, and believed that he might be able to extract enough power in the process for the system to run itself.

Any modern engineer would clearly see that Westinghouse was after a , and the Irish physicist , one of Westinghouse's correspondents, told him that he would be violating the laws of . Westinghouse replied that might be the case, but it made no difference. If he couldn't build a perpetual-motion machine, he would still have a heat pump system that he could patent and sell.

With the introduction of the after the turn of the century, Westinghouse went back to earlier inventions and devised a compressed air for automobile suspensions.

Westinghouse remained a captain of American industry until 1907, when a financial panic led to his resignation from control of the Westinghouse company. By 1911, he was no longer active in business, and his health was in decline.

In 1918 his former home was razed and the land given to the City of Pittsburgh to establish . In 1930, a memorial to Westinghouse, funded by his employees, was placed in in Pittsburgh. is near the site of his Turtle Creek plant. Its plaque reads:

IN BOLDNESS OF CONCEPTION, IN GREATNESS AND IN USEFULNESS TO MANKIND THIS BRIDGE TYPIFIES THE CHARACTER AND CAREER OF GEORGE WESTINGHOUSE 1846-1914 IN WHOSE HONOR IT WAS DEDICATED ON SEPTEMBER 10, 1932