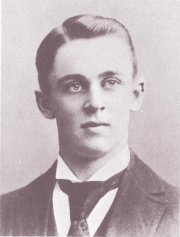 Robert Andrews Millikan (March 22, 1868 – December 19, 1953) was an American experimental physicist, and Nobel laureate in physics for his measurement of the charge on the and for his work on the . He served as president of from 1921 to 1945.

Millikan went to high school in . Millikan received a in the from in 1891 and his doctorate in from in 1895 – he was the first to earn a Ph.D. from that department.

:"At the close of my sophomore year [...] my Greek professor [...] asked me to teach the course in elementary physics in the preparatory department during the next year. To my reply that I did not know any physics at all, his answer was, 'Anyone who can do well in my Greek can teach physics.' 'All right,' said I, 'you will have to take the consequences, but I will try and see what I can do with it.' I at once purchased an Avery’s "Elements of Physics", and spent the greater part of my summer vacation of 1889 at home – trying to master the subject. [...] I doubt if I have ever taught better in my life than in my first course in physics in 1889. I was so intensely interested in keeping my knowledge ahead of that of the class that they may have caught some of my own interest and enthusiasm."

Millikan's enthusiasm for education continued throughout his career, and he was the coauthor of a popular and influential series of introductory textbooks, [The books, coauthored with Henry Gordon Gale, were "A First Course in Physics" (1906), "Practical Physics" (1920), "Elements of Physics" (1927), and "New Elementary Physics" (1936).] which were ahead of their time in many ways. Compared to other books of the time, they treated the subject more in the way in which it was thought about by physicists. They also included many homework problems that asked conceptual questions, rather than simply requiring the student to plug numbers into a formula.

Charge of the electron

Starting in 1909, while a at the , Millikan and worked on an (since repeated, with varying degrees of success, by generations of physics students) in which they measured the charge on a single . Professor Millikan took sole credit, in return for Fletcher claiming full authorship on a related result for his dissertation. [cite magazine|title=In the Case of Robert Andrews Millikan|url=http://www.its.caltech.edu/~dg/MillikanII.pdf|author=David Goodstein|journal=American Scientist|date=Jan-Feb 2001|pages=54-60] Millikan went on to win the 1923 , in part for this work, and Fletcher kept the agreement a secret until his death. [cite journal | title = My Work with Millikan on the Oil-drop Experiment | author = Harvey Fletcher | journal = Physics Today | date = June, 1982 | pages = p. 43] After a publication on his first results in 1910,

The is one of the fundamental and accurate knowledge of its value is of great importance. His experiment measured the force on tiny charged droplets of oil suspended against gravity between two metal electrodes. Knowing the electric field, the charge on the droplet could be determined. Repeating the experiment for many droplets, Millikan showed that the results could be explained as multiples of a common value (1.592 × 10−19 ), the charge on a single electron. That this is somewhat lower than the modern value of 1.602 176 53(14) x 10−19 is probably due to Millikan's use of an inaccurate value for the of air.

Although at the time of Millikan's oil drop experiments it was becoming clear that there exist such things as subatomic particles, not everyone was convinced. Experimenting with cathode rays in 1897, had discovered negatively charged 'corpuscles', as he called them, with a mass 1/1840 times that of a hydrogen atom. Similar results had been found by and . Most of what was then known about electricity and magnetism, however, could be explained on the basis that charge is a continuous variable; in much the same way that many of the properties of light can be explained by treating it as a continuous wave rather than as a stream of photons.

The beauty of the oil drop experiment is that as well as allowing quite accurate determination of the fundamental unit of charge Millikan's apparatus also provides a 'hands on' demonstration that charge is actually quantised. Charles Steinmetz, of the General Electric Company, who had previously thought that charge is a continuous variable, became convinced otherwise after having a go with Millikan's apparatus.

There is some controversy over the use of selectivity in Millikan's results of his second experiment measuring the electron charge. This work was done by , a former high energy experimentalist and current philosopher of science at the University of Colorado. Franklin contends that, while Millikan's exclusions of data do not affect the final value of the charge of an "e−" that he obtained, there was substantial "cosmetic surgery" that Millikan performed which had the effect of reducing the statistical error on the charge of an "e−". This enabled Millikan to quote the figure that he had calculated the charge of "e−" to better than one half of one percent; in fact, if Millikan had included all of the data he threw out, it would have been within 2%. While this would still have resulted in Millikan having measured the charge of "e−" better than anyone else at the time, the slightly larger uncertainty might have allowed more disagreement with his results within the physics community, which Millikan likely tried to avoid.

When Einstein published his seminal 1905 paper on the particle theory of light, Millikan was convinced that it had to be wrong, because of the vast body of evidence that had already shown that light was a . He undertook a decade-long experimental program to test Einstein's theory, which required building what he described as "a machine shop "in vacuo" in order to prepare the very clean metal surface of the photo electrode. His results confirmed Einstein's predictions in every detail, but Millikan was not convinced of Einstein's radical interpretation, and as late as 1916 he wrote, "Einstein's photoelectric equation... cannot in my judgment be looked upon at present as resting upon any sort of a satisfactory theoretical foundation," even though "it actually represents very accurately the behavior" of the photoelectric effect. In his 1950 autobiography, however, he simply declared that his work "scarcely permits of any other interpretation than that which Einstein had originally suggested, namely that of the semi-corpuscular or photon theory of light itself."

Since Millikan's work formed some of the basis for modern particle physics, it is ironic that he was rather conservative in his opinions about 20th century developments in physics, as in the case of the photon theory. Another example is that his textbook, as late as the 1927 version, unambiguously states the existence of the ether, and mentions Einstein's theory of relativity only in a noncommittal note at the end of the caption under Einstein's portrait, stating as the last in a list of accomplishments that he was "author of the special theory of relativity in 1905 and of the general theory of relativity in 1914, both of which have had great success in explaining otherwise unexplained phenomena and in predicting new ones."He is also credited with measuring the value of Planck's constant by using photoelectric emission graphs of various metals.

(and so must be charged particles).

Robert Millikan was Vice Chairman of the National Research Council during World War I. During that time, he helped to develop anti-submarine and meteorological devices. He received the Chinese Order of Jade. In his private life, Millikan was an enthusiastic player. He was married and had three sons, the eldest of whom, , became a prominent aerodynamic engineer.

In his later life he became interested in the relationship between Christian faith and science, his own father having been a minister. He dealt with this in his at in 1926–7, published as "Evolution in Science and Religion". ["Evolution in Science and Religion" (1927), 1973 edition: Kennikat Press, ISBN 0-80461702-3 ] A more controversial belief of his was eugenics. This led to his association with the and his praising of for being "the westernmost outpost of Nordic civilization . . . [with] a population which is twice as Anglo-Saxon as that existing in New York, Chicago or any of the great cities of this country." [ [http://www.washingtonpost.com/wp-srv/WPcap/2000-03/16/076r-031600-idx.html "Judgment At Pasadena"] , , March 16, 2000, p. C1. Retrieved on March 30, 2007.]

In 1938, he wrote a short passage to be placed in the . [ [http://www.archive.org/details/timecapsulecups00westrich Internet Archive: Details: The book of record of the time capsule of cupaloy, deemed capable of resisting the effects of time for five thousand years, preserving an account of universal achievements, embedded in the grounds of the New York World's fa... ] ]

AT this moment, August 22, 1938, the principles ofrepresentative ballot government, such as are representedby the governments of the Anglo-Saxon, French, andScandinavian countries, are in deadly conflict with theprinciples of despotism, which up to two centuries agohad controlled the destiny of man throughout practicallythe whole of recorded history. If the rational, scientific,progressive principles win out in this struggle there is apossibility of a warless, golden age ahead for mankind.If the reactionary principles of despotism triumph nowand in the future, the future history of mankind will repeat the sad story of war and oppression as in the past.

Millikan died of a at his home in San Marino, California in 1953 at age 85, and was interred in the "Court of Honor" at Forest Lawn Memorial Park Cemetery in .

Millikan Middle School (formerly Millikan Junior High School) in the suburban Los Angeles neighborhood of Sherman Oaks is named in his honor, as is Robert A. Millikan High School in Long Beach, California. The Millikan Library, the tallest building on the campus is also named for him. Additionally, a major street through the campus in , is named after him, with the , a station on 's named after the street.

*:Robert Millikan is widely believed to have been denied the 1920 prize for physics owing to Felix Ehrenhaft's claims to have measured charges smaller than Millikan's elementary charge. Ehrenhaft's claims were ultimately dismissed and Millikan was awarded the prize in 1923.

;Other sources
* Waller, John, "Einstein's Luck: The Truth Behind Some of the Greatest Scientific Discoveries". Oxford University Press, 2003. ISBN 0-19-860719-9
* Physics paper "On the Elementary Electrical Charge and the Avogadro Constant (extract)" http://www.aip.org/history/gap/
*

succession box
before=New position
title=Chairman of the Executive Council of the
years=1921–1945
after=, as "President of the California Institute of Technology"
###@@@KEYEND@@@###