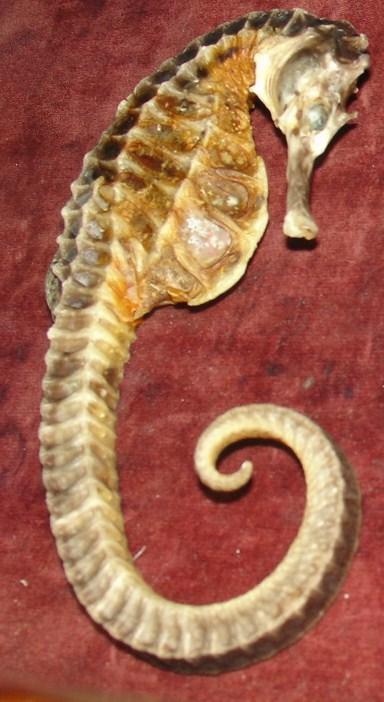 The big-belly seahorse or pot bellied seahorse, "Hippocampus abdominalis", is one of the largest seahorse species in the world with a length of up to 35 cm.

The big-belly seahorse is found in large rock pools at low tide, amidst seaweed. Juveniles are or attached to drifting .

The large-belly seahorse has a forward-tilted, long-snouted head, distended but narrow pot belly, and a long coiled tail. It swims using its with a vertical stance - when not swimming it coils its tail around any suitable growth, such as , waiting for ic animals to drift by when they are sucked up by the small mouth set at the tip of the snout much like a vacuum cleaner. Seahorses are voracious feeders, eating mainly s, such as shrimps, and other small animals living among the seaweed such as s and s. They do not masticate so they can eat to excess because of their small gut tract. Each eye moves separately making it easier for them to see food and predators.

It is quite easy to distinguish males from females. The male have a smooth soft pouch-like area at the base of its between where the stomach meets the tail on the front side. Males also have a fin here but it is less obvious. The female will have more of a pointed stomach with a very obvious fin at the base of the stomach.

Large-belly seahorses have a very intricate social life every morning, the female travels to her mate and they entwine tails and 'dance' together for six to 10 minutes, changing colour and promenading across the seabed. In wild seahorse populations, monogamy appears to be the rule rather than the exception. It is thought that such pair bonding is reinforced by daily greetings which are performed only with an individual's partner

In the wild, the breeding can commence when the seahorses are about one year old and experiments show that this can be reduced to about eight months when in captivity. Breeding in big-belly seahorses is usually observed during spring/summer.

Courtship initiation involves a series of colour changes and postural displays. Dilating the opening of their brood pouch slightly, males inflate the pouch to balloon-like proportions with water by swimming forwards, or by pushing their body forwards in a pumping action, then closing the pouch opening. At the same time they lighten their pouch in colour to white or light yellow. Males also brighten their overall body coloration, typically intensifying the colour yellow. Male repeatedly approach their selected female with their head tucked down, and dorsal and s rapidly fluttering. If the female is not receptive she ignores the male, who then looks for another potential mate. If no females are receptive the male stops displaying and deflates the pouch by dilating the pouch opening and bending forwards, expelling the water inside. If a female is receptive to a courting male, she reciprocates with her own colour changes and head tucking, typically intensifying the lighter colours such as yellow and white, highlighting the contrast between these colours and their overall darker blotching and banding patterning. A series of short bursts of swimming together in tandem then ensues, sometimes with tails entwined, or with the female tightly rolling her tail up. This has often been described as ‘dancing’. After coming to rest, the male attempts to get the female to swim towards the water surface with him by repeatedly pointing his snout upwards.

If the female responds by also pointing her snout upwards then the final stage of courtship follows. This involves both males and females swimming directly upwards towards the water surface with both their heads pointing upwards and tails pointing straight down. If they reach the water surface, one, or both seahorses, can often be seen and heard to snap their heads. To transfer her eggs to the male, the female faces the male, slightly above him. Pressing the base of her abdomen against the male's pouch she then squirts her eggs through the opening in the front of his dilated pouch.

The male seahorse can give birth to up to 721 babies at a time. Their colouring is a variable shade of brown, mottled with yellow-brown and with darker splotches. The tail is often circled with yellow bands. In deeper water where the tail is anchored to other colourful forms of life, such as s and s, they often take on these colours.

Because "H. abdonimalis" is a very large, smooth skinned species of seahorse it makes them a very good candidate for their use in Traditional Chinese Medicine (TCM). In TCM, seahorses are credited with having a role in increasing and balancing vital energy flows within the body, as well as a curative role for such ailments as asthma, impotence, high cholesterol, goitre, kidney disorders, and skin afflictions such as severe acne and persistent nodules. As well as the TM trade in seahorses, there is also a significant trade in seahorses as aquarium fish and curios.