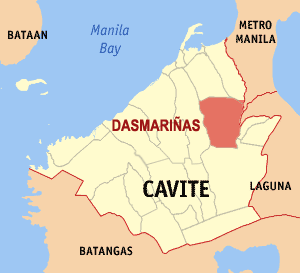 The Municipality of Dasmariñas (often shortened to "Dasma"; Filipino: "Bayan ng Dasmariñas") is a first class urban municipality in the province of Cavite, . It is located approximately 30 kilometers south of . According to the 2007 census, it has a population of 556,330 people, making it the most populous municipality in the Philippines.

Besides being the richest local government unit in the province of Cavite according to the 2006 Commission on Audit report, Dasmariñas is the only municipality in the Philippines that has both an SM and Robinsons Mall.

With the continuous expansion of Metro Manilla, the municipality is now included in Manilla built up area which reaches Lipa City in its southernmost part.

Dasmariñas has the biggest population in the entire Cavite with over 700,000 daytime population. The town has 75 barangays and has more than 170 subdivisions and the biggest resettlement area in the Philippines, (DBB).

Most affluent families from Metro Manila and nearby towns and provinces has chosen Dasmariñas to be their home due to its proximity to the National Capital Region. The mass exodus of people here in Dasmariñas is also brought about by the industrial boom which brought about more jobs. There are also a big number of foreign residents such as Koreans, Chinese, Japanese, American, Hindu,etc. Because of this, Dasmariñas can be also considered as the "Melting Pot" of Cavite.

Majority of the people are but there is a fast-growth of / Churches throughout Dasmariñas. Church of God International (Ang Dating Daan), , Baptist, Adventist, , Mormon Churches and are established in the area.

The municipality of Dasmariñas is one of the fastest growing municipalities in the province of Cavite. Numerous commercial establishments, which include major shopping malls, fast foods, groceries, convenient stores, restaurants and other service-oriented businesses, are mostly concentrated in the town proper. Industrial establishments are located in the outskirts of the municipality. It has the greatest number of universities in the province.

From an agri-based economy, the town of Dasmariñas has evolved into a highly urbanized and industrial town. It now boasts of three industrial estates, namely: (FCIE) in Barangay Langkaan, located in Barangay Paliparan I and in Bagong Bayan. Aside from these industrial areas, there are 240 other factories/business establishments scattered in the different barangays that sum up to a total of 309 operational industries in the municipality. Dasmariñas is home to hundreds of thousands of residents who occupy the more than 70 residential subdivisions of the municipality. It also serves as a haven to investors with its industrial estates and diverse pool of manpower. The rapid growth of the municipal population near universities, industrial estates and factories provides a ready market for real estate ventures such as subdivisions, apartments and other support services. Its infrastructure projects involving major road construction and widening support the town in its functional role as one of the residential, commercial, industrial and university centers of Cavite. To protect its environment, Dasmariñas has adopted its program, which is envisioned to plant 100,000 seedlings planted over the town during the year 2000.

Dasmariñas is about 8,234 hectares, 12 kilometers from or the National Capital Region and 27 kilometers south of the center of the . It is bounded by the municipalities of Imus and Silang, both in Cavite at the north and south respectively, at the east by the towns of San Pedro and by the side of Laguna and Carmona and at the west, it is bounded by , also in Cavite and a little further from this boundary is .

It is strategically located at the intermediate zone of the Metropolitan Manila area. With adequate accessibility, Dasmariñas is within the urbanizing development influence of Metro Manila area.

It is composed of the Poblacion and the barangays. The Poblacion which is now divided into four zones is on the westernmost section of the municipality, Sabang, Salawag and Salitran are to the north and to the south are San Agustin, Langkaan and Sampaloc. Burol, Paliparan, and the Resettlement Area are on the eastern side of the municipality.

The town of Dasmariñas is landlocked. However, it is not too far from the coastal towns of , , , and whose average distance from Poblacion is less than 30 kilometers. It is about the same distance from Laguna de Bay and about 27 kilometers from the resort city of and the famous .

At present, Dasmariñas is served by corridors traversing the central areas which provide linkages to the Metropolitan Manila area core in the north and the developing nodes of Laguna and .

Dasmariñas is partly lowland and partly hill. The Poblacion itself is elevated. From an elevation of 80 meters at the Poblacion, the land rises to 250 meters towards Silang. Generally, land near rivers and creeks are rugged. Dasmariñas is outside the typhoon belt and has no fault line constraints. Further, it is served by natural drainage system since it is traversed by several rivers and water tributaries draining to the Manila Bay. The town has not yet to experienced floods.

Strongly sloping to elevated areas cover approximately 1,532.16 hectares or 18.61% of the total area. These are dispersed among Burol, Langkaan, Paliparan, Salawag, Sampaloc and San Agustin. Areas with slopes 10.1 to 18% cover about 575.72 hectares of land in portions of Salawag, Salitran, Burol, and other parts.

The temperature in Dasmariñas has been noted to range from below 60 F to about 90 F. Further, south, however, where there is a higher elevation, the temperature becomes as cool as 50 F during the Christmas season.

The origin of the name "Dasmariñas" is "", a Spanish governor of the Philippines from 1590 to 1593. After his death, his son was the governor from 1593 to 1596. Pérez Dasmariñas came from , . Dasmariñas literally means "from the marines" in the (NW of Iberian Peninsula).

According to Agustin de la Cavada in his Historia Geografica, Geologica y Estadistica de Filipinas, this town started as a barrio of Imus and it was made into an independent municipality in 1867. The Spanish government named the town of Perez Dasmariñas in honor of Don Perez Dasmariñas who was the Governor General of the Islands from 1590 to 1593. Chinese oarsmen whom he had hired murdered him. His son, Don Luis Perez Dasmariñas also lost his life in the hands of the Chinese in 1603. Don Gomez Dasmariñas was well remembered because he was the one who ordered complete fortification of Intramuros and the construction of Fort Santiago.

The town of Perez Dasmariñas was founded by the Recollect Fathers in the year 1867 under the patronage of the Immaculate Conception whose feast day is celebrated on . Perez Dasmariñas was formerly a "visita" of that was also founded by the Recollect Fathers in 1795. According to records, the first settlers must have arrived in 1861 and were believed to be the families of Gil Tirona, Vicente Guevarra, Eleuterio Geda and Eustaquio Paulino.

Dasmariñas has a colorful history. On , , the Spanish forces came and brought destruction to the town and its people. Almost fifty percent of the population was wiped out during the attack and almost all buildings were burned down except the Roman Catholic church which remained undamaged. The Spaniards utilized it as their garrison.At the coming of the American fleet of and the famous naval battle of Manila Bay in May 1898, which defeated the Spanish forces under , the people of Dasmariñas under the leadership of Placido Campos, fought and drove away the Spaniards occupying the town. Noted Filipino generals like Flaviano Yengko and Crispulo Aguinaldo (elder brother of Gen. Emilio Aguinaldo) died in action in Dasmariñas during the encounters.

The people who resettled back thereafter rebuilt the town that was heavily devastated. So sooner was it rehabilitated, then in the late 1800s, the Filipinos were again up in arms, this time against the Americans. Then again, Dasmariñas was annihilated and identity was lost in a heap of rabble. Two years later, the American regime took over and in 1904, the town was again reverted to its former distinction as part of Imus. In 1917, however, Dasmariñas re-gained its recognition as a separate municipality. Consequently, provincial Governor A. Soriano along with leading officials of the town particularly Placido Campos, Francisco Barzaga, Felipe Tirona and many others, convened and voted to drop the name "Perez" and retain "Dasmariñas" as its official name.

Today, Dasmariñas is complemented with over 375,000 population (as of 2000). As one of Cavite's municipalities situated within the Metro Manila urban area, Dasmariñas serves as the main catalyst for a major economic development and sustained growth throughout the 1990s. The influx of industries and real estate developments is unheard of in a town outside of a financial district, attest to the fact that Dasmariñas is way ahead in crossing the bridge to the 21st century. The next millennium is a challenge but Dasmariñas will no doubt prevail.

The idea of converting Dasmariñas into a component city was pushed in 1997 and again in 2000, but the people overwhelmingly rejected it. However, recent unofficial surveys have shown that the municipality's inhabitants are now willing to push forward with cityhood. Dasmarinas will start the campaign for its cityhood in 2008

Dasmariñas is politically subdivided into 77 s.