Florida Agricultural and Mechanical University, commonly known as Florida A&M or FAMU, is a historically black university located in , USA, the state capital, and is one of eleven institutions in Florida's State University System.

Florida A&M University student enrollment population consists primarily of undergraduates. The University offers 62 bachelor's degrees in 103 majors/tracks. 36 master's degrees with 56 majors/tracks are offered within eleven of the University's 13 schools and colleges. Two professional degrees and eleven PhD degree programs are offered. FAMU is noted for its School of Business & Industry (SBI) and College of Pharmacy. The School of Architecture is also highly acclaimed.

Most recently Florida A&M has become the number-one college for African Americans in the country according to Magazine's September 2006 issue. This ranking is due mostly to the high graduation rate, as well as the high academic and social atmosphere. FAMU is a member school of the . In the fall of 1997, FAMU was selected as the TIME Magazine-Princeton Review "College of the Year" and was cited in 1999 by Black Issues in Higher Education for awarding more baccalaureate degrees to African-Americans than any institutions in the nation. A perennial leader in the recruitment of National Achievement Scholars (NAS), FAMU tied Harvard in fall 2000 and was No.1 in the nation in recruiting NAS in 1992, 1995, and 1997.

FAMU has eight fully-funded endowed eminent scholars chairs including two in School of Journalism and Graphic Communications, four in the School of Business & Industry, one in the College of Education, one in Arts and Sciences, and one in its School of Pharmacy, which also has the largest enrollment of African-American Ph.D. students in the country.

On October 3, 1887, the State Normal College for Colored Students began classes, and became a four years later when it received $7,500 under the Second Morrill Act, and its name was changed to State Normal and Industrial College for Colored Students. However, it was not an official institution of higher learning until the 1905 Buckman Act, which transferred control from the Board of Education to the Board of Control, creating what was the foundation for the modern Florida A&M University. This same act is responsible for the creation of the and from their previous institutions. In 1909, the name of the college was once again changed to Florida Agricultural and Mechanical College for Negroes, and in 1953 the name was finally changed to Florida Agricultural and Mechanical University.

History of FAMU College of Law

The College of Law’s rich tradition of excellence dates back to its original founding. On December 21, 1949, a division of law was established at the then Florida A&M College and the first class was admitted in 1951. In 1966, the Florida Board of Control (later known as the Board of Regents) withdrew its permission for the institution to admit law students, and two years later, the law school graduated its last class and closed its doors. Between 1954 and 1968, the law school had graduated 57 men and women, many of whom went on to make significant contributions to the legal profession both within the State and throughout the nation.

One of the original law school’s original professors, Leander Shaw, Jr., serves as an Associate Justice of the Florida Supreme Court.

The 2000 Florida Legislature unanimously passed legislation establishing a law school at Florida A&M University and on June 14, 2000, Governor Jeb Bush signed the bill into law. The College of Law admitted its first class in Fall 2002. Florida Agricultural and Mechanical University will continue its mission of meeting the educational needs of African Americans and other ethnic minorities, while maintaining its leadership in racial diversity. At the same time, the University seeks students from all racial, ethnic, religious and national groups, without regard to age, sex, or disability, who have the potential to benefit from a sound education.

In law, FAMU reaffirms its historical responsibilities to its students to provide important opportunities for service to the diverse communities in Florida, the nation, and the world. The College of Law’s role is to promote the development of legal professionals as community leaders who are sensitive to the needs of all people.

On June 21, 2007 the Commission on Colleges of the placed the university on probation for six months because the university failed to comply with several core requirements. 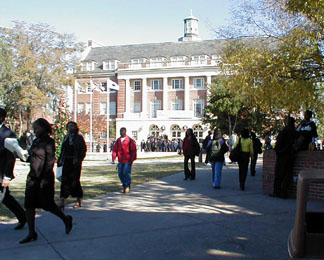 caption = FAMU campus, Lee Hall
location=
locmapin = Florida
area =convert|370|acre|km2|1
built =1907
architect= ; , et al.
architecture= Colonial Revival, Classical Revival
added = ,
governing_body = State
refnum=96000530Part of the campus is listed on the U.S. as the Florida Agricultural and Mechanical College Historic District. It received that designation on May 9, 1996. The district is centered along the section of Martin Luther King Boulevard that goes through the campus. According to the National Register, it covers convert|370|acre|km2|1, and contains 14 historic buildings and 1 object.

The school is also well known for the marching band "."