"Papa Don't Preach" is the second single by American singer-songwriter Madonna from her 3rd studio album "True Blue" and was released on , by . It was an international #1 hit and caused huge controversy with its music video depicting a pregnant young teenage mother. The song later appeared remixed on the 1990 compilation album "".

"Papa Don't Preach" is sung from the perspective of a teenage girl who admits to her father (played by in the music video) that not only is she , but she plans to keep and raise the child. Typically for Madonna, the single caused some controversy because of its somewhat taboo subject matter. It was criticized by parents, conservative religious groups, and women's organizations because it seemed to glorify teenage pregnancy. [ [http://mad-eyes.net/disco/tb/papa-dont-preach.htm http://mad-eyes.net/disco/tb/papa-dont-preach.htm] "Mad-eyes.net" ] Madonna has always flatly denied these criticisms, stating that the song aims to illustrate the real-life experience of young girls who fall in love. Actress plays one of Madonna's friends in the video, and actor plays the role of her boyfriend.

The song also earned Madonna her first praise from former critics from across the political spectrum. , who just a year earlier had denounced Madonna and her single "" as "vulgar" and had led a campaign against vulgar music, commended Madonna for speaking candidly about such a relevant and important social issue. Conservatives also supported Madonna's message that she was choosing to keep her unborn child rather than undergoing an .

Despite, or perhaps because of, the controversy surrounding the song, it was a huge success that topped the singles charts in several countries, including the .

The lyrics of the song clearly match the story of the video, allowing the message to be more straight-forward. Set in New York, the video features Madonna as a young teenager who lives with her father. Camcorder footage shows him playing with her as a little girl, showing the depth of their relationship. However, there is also indication of the father's concern for his young daughter as she grows while Madonna pleads with him in the song not to consider her as a "baby" anymore.

Madonna's character connects with and falls in love with a young car-mechanic, actor , a man whom her father had apparently "warned her all about" and to stay away from. Yet the young man appears genuinely loving towards Madonna, acting somewhat shyly around her and taking her for a trip on the night-boat where they are admired by an older couple. Feeling blessed, they dance together on-deck, happy and carefree. Yet this more light-hearted footage of two teenagers in love is integrated with more serious shots of Madonna's anguish over her child, clashing with her friends over her decision to keep it as well as her father's clear disapproval and convern over her relationship. It appears that as Madonna has grown, her bond with her father has come under some strain as although they do the same chores together, they no longer appear to spend quality time together as they used to in the past.

In between the shots of the story being played out, Madonna is featured dancing and singing against a dark blackground in a strapless boustier top and tight trousers, possibly as a representation of her inner-emotions.

The video has become somewhat notorious for a split-second "nipple-slip". At one point while Madonna is dancing in her black boustier top, her left nipple slips out from her top a split second before the scene cuts away. The video was one of the first video singles ever to be released on the format. 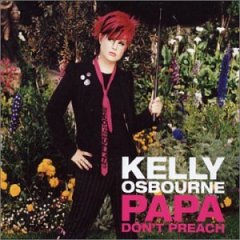 "Papa Don't Preach", in a harder pop rock style, was covered in 2002 by and members of Incubus for "The Osbournes Family Album", the soundtrack to the hugely popular TV Show, "". Older sister was originally asked to record the song, but declined and suggested Kelly sing on it instead. Kelly premiered the song at the 2002 where she performed for the first time. Kelly's version was released as her debut single and reached number three in the UK and Australia, and number five in . The popularity of the song and TV Show led to the release of her debut album "Shut Up". In both the Madonna and Kelly Osbourne songs, there is a shirt with the quote "Italians do it Better." Madonna is wearing that shirt and Kelly Osbourne has it hanging behind her.

amples, appearances in other media, etc.

* English house music duo Nomad sampled the violin intro of "Papa Don't Preach" for their own track "Higher Than The Heavens" on their self-titled album in 1991.
* The violin intro of the track was sampled in 1992 for the classic rave/ tune "Field of Dreams" by The Brothers Grimm on Production house label.
* It was also sampled as the backing for a UK and Ireland top-ten track by Boy Wunda presented by Progress in the song "Everybody" in 1993.
* The intro also appeared on several Vauxhall car adverts between and .
* Also, the beginning of the song was sampled on ' 2004 single "", and a slowed down version samples 's 2006 single "Fallen".
*The song appears in the game .
* It is in
* Neja (Italian dance artist) had covered this song in her new 2008 album AcousticClub