"Not to be confused with from album "Revolver". 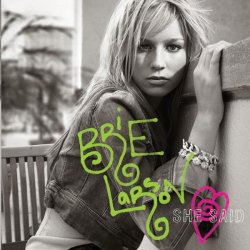 "She Said" is the debut single of the pop/rock singer .

The music video was directed by ans was filmed in , and was supposed to be shot at a beach, but it rained so they filmed it at a fast food restaurant. She Said was featured on 's "" as a PreRL in th, entered in Top 20 Special of "TRL" and also was an MTV regular video.

The video starts with Larson coming in the restaurant, and her boss hires her to work, she gets ready for work, 2 customers come in, who are 2 girls, one girl whispers in the other girls ear, laughing and making fun of Larson, larson gets 2 hamburgers on a tray, she drops them on the floor, smiling, putting the hamburgers back on the tray and serves it to the girls, Larson turns around smiling, the girls start eating the hamburgers that was dropped on the floor, Larson looks at them eating, laughing at them. Goes in the kitchen, grabs her guitar sitting on the couch, and starts playing and singing. Another customer comes in, it was a guy, Larson looks at the customer, smiling at him, and he smiling also, but he boss forces her to make some lemonade.Then 3 customers are there, she gets the guy his order but the other customer throws a fit, gets upset, making Larson rush, she gets his order, but he grabs it and was heading out for the door, probably didn't pay for the order but Larson gets on the counter and jumps on the customer, her boss orders her to wash the dishes, she gets miserable, goes into the kitchen, it was full of dirty dishes, Larson gets mad and destroys the whole kitchen and walks out, goes to a building takes her guitar and starts singing with her band. The video ends with Larson in the restaurant.

*A customer to the fast food restaurant in the video is a reference to the title character of the movie "".