A Matter of Life and Death (film)

A Matter of Life and Death (film) 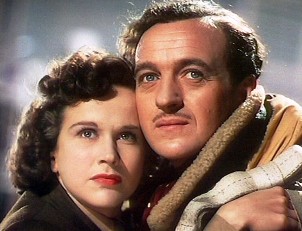 "A Matter of Life and Death" (fy|1946) is a film by the British writer-director-producer team of Michael Powell and Emeric Pressburger. The film was originally released in U.S. under the title "Stairway to Heaven", which was derived from the film's most prominent special effect: a broad linking the other world and Earth. Reversing the convention of "The Wizard of Oz", the supernatural scenes are in , while the ones on Earth are in .

Peter Carter () is a British pilot trying to nurse a badly damaged and burning Lancaster bomber home after a mission in May 1945. His crew has already bailed out, but Carter's parachute has been shot up. He manages to get in touch with June (), an American radio operator based in England, and carries on a tender conversation with her in the few minutes before he is forced to jump without a usable parachute.

Peter should have died at that time, but doesn't because of a mistake on the part of Conductor 71 (), the guide sent from the "other world" to collect him. They miss each other in the thick fog over the . Instead, Peter wakes up the next day on a beach near June's base, and is completely bewildered when he finds he is alive and not in some afterlife.

Peter meets June who is cycling back from her night shift, and the pair fall in love. Conductor 71 (a French aristocrat executed during the ) appears to Peter, stopping time to explain the situation and to convince him to accept his fate. Peter refuses and demands that the matter be appealed. While Conductor 71 goes to consult his superiors, Peter continues to live his life.

On Earth, Peter's visions of Conductor 71 are diagnosed by June's fascinated friend Doctor Reeves () as a symptom of a rapidly progressing brain injury &ndash; chronic adhesive from a concussion two years earlier &ndash; and he is scheduled for surgery. When Reeves is killed while riding his motorcycle through the storm, trying to find the ambulance coming to bring Peter to the hospital, his arrival in the other world allows him to plead Peter's case, arguing that, through no fault of Peter's, he has fallen in love and now has an earthly commitment which should take precedence over the afterlife's claim on him.

The matter comes to a head &ndash; mirroring the outcome of the brain surgery Peter is undergoing &ndash; before a celestial court of the whole population of the afterlife &ndash; the camera zooms out from an to reveal that it is as large as a . The prosecutor is American Abraham Farlan (), who hates the British for causing his death in the .

Reeves challenges the composition of the jury which is made up of representatives of countries and races prejudiced by their experiences of the British. The jury is replaced by a cosmopolitan mixture of modern Americans whose origins mirror those they replace.

Reeves and Farlan both cite examples from British and world history to support their positions. In the end, Reeves has June take the stand (she is made to fall asleep in the "real" world by Conductor 71 so she can testify) and proves that she genuinely loves Peter by telling her that the only way to save his life is to take his place. She steps onto the stairway without hesitation and is carried away, leaving Peter behind. Then the stairway comes to an abrupt halt and June rushes back to Peter's open arms. As Dr. Reeves triumphantly remarks, "...nothing is stronger than the law in the universe, but on Earth, nothing is stronger than love."

The jury rules in Peter's favour. The Judge () shows Reeves and Farlan the new lifespan granted to the defendant; Reeves calls it "very generous", and Farlan reluctantly agrees to it. The scene then shifts to the operating room, where the surgery is declared a success and the surgeon is revealed to be The Judge.

Cast notes:
*Raymond Massey and David Niven died on the same day, 29 July fy|1983, Niven of (motor neurone disease or Lou Gehrig's Disease), and Massey of pneumonia. They had appeared together earlier in their careers in "" in fy|1937 as well.
* Dr. Reeves' golden cocker spaniels in the scene in the camera obscura were Michael Powell's, Erik and Spangle making their fourth and final appearance in Powell's films,

"A Matter of Life and Death" was filmed at D&P Studios and Denham Studios in , England, and on locations in Devon and Surrey. The beach scene was shot at in , and the village seen in the was in . Production took place from 2 September fy|1945 to 2 December 1945, used twenty-nine sets, and cost an estimated £320,000. [IMDB [http://imdb.com/title/tt0038733/locations Filming Locations] , IMDB [http://imdb.com/title/tt0038733/business Business Data] ]

The film had an extensive pre-production period due to the complexity of the production:

The huge escalator linking this world with the other, called "Operation Ethel" by the firm of engineers who constructed her under the aegis of the , took three months to make and cost £3,000 (in 1946). "Ethel" had 106 steps each convert|20|ft|m wide and was driven by a 12 h.p. engine. The full shot was completed by hanging miniatures.

Because the rest of the film was in Technicolor, there was a nine-month wait for film stock and Technicolor cameras, since they were being used by the US Army to make training films.

The decision to film the scenes of the "other world" in black and white added to the complications. Where they merge from black and white to colour they are filmed in Technicolor but the colour isn't fully developed giving a pearly hue to the black & white shots.

Other sequences also presented challenges, such as the stopped action table-tennis game (for which Kim Hunter and Roger Livesey were trained by champions Alan Brooke and ), the scene where David Niven washes up on the beach, the first scene filmed, where cinematographer Jack Cardiff fogged up the camera lens with his breath to create the look he wanted, and the long (25 minute) trial sequence, the set for which required a convert|350|ft|m|sing=on long by convert|40|ft|m|sing=on high backcloth.

The film was chosen for the first ever on 1 November 1946 in aid of the . It then went into general release in the UK on 30 December fy|1946. It premiered in on 25 December 1946 and in on 23 January fy|1947. (The American release changed the title - see below - and, in the initial release, cut the scenes showing a naked young goatherd, though this is usually included in most versions available today, even those which are still titled "Stairway to Heaven".)

Are the visions real?

While the film never specifically states whether Peter's visions are real, the actor playing the judge also plays the brain surgeon. As is shown in the paper, [http://www.powell-pressburger.org/Reviews/46_AMOLAD/AMatterOfFriedOnions.html "A matter of fried onions"] and subsequent work by , there was a large amount of medical research carried out to ensure that the symptoms shown agreed with a correct medical diagnosis of Peter Carter's condition.

A young flyer () hears that anyone may start as they like and says "It's heaven, isn't it?". This could be interpreted as a direct description of the place where he finds himself as "heaven" or it could be an adjectival use. This is followed, however, by a definite adjectival use where an angel () tells Trubshawe () that "many people would consider it heaven to be a clerk".

The architecture of the other world is noticeably ; vast and open plan, with huge circular observation holes beneath which the clouds of Earth can be seen. This vision was later the inspiration for the design of a bus station in , England, by architects "Allford Hall Monaghan Morris", and the film's amphitheatre court scene was rendered by BT in a TV advertisement in about 2002 as a metaphor for communication technology, especially the .

The film was originally suggested by a British government department to improve relations between the Americans in the UK and the British public, [Desowitz, Bill [http://query.nytimes.com/gst/fullpage.html?res=9405E4D81538F932A05753C1A96F958260&sec=&spon=&pagewanted=all "Resurrecting a Cosmic Fantasy of Love and Death"] "" (31 Oct 1999)] following Powell and Pressburger's contributions to this sphere in "" two years earlier, though neither film received any government funding nor input on plot or production. There was a general groundswell of hostility against the American servicemen stationed in the UK for the invasion of Europe. They were viewed as latecomers to the war and as "overpaid, oversexed and over here" by a public that had suffered three years of bombing and rationing, with many of their own men fighting abroad. The premise of the film being a simple inversion, the English pilot gets the pretty American woman, rather than the other way round, and that the only national bigotry is voiced by the first American casualty of the Revolutionary War against the English.

*The film was adapted for the series on American TV
**"Stairway to Heaven", 9 April ytv|1951 (), starring [ [http://www.powell-pressburger.org/Reviews/46_AMOLAD/LiveTV.html Robert Montgomery Presents details] ]
Note: This was a live performance.

*A still of the movie (the final "escalator" scene, with the trial court reunited at Carter's surgery) was used as the cover for 's 1989 single "Something Happened on the Way to Heaven".

*The stairway is seen in the film "", and the statues standing beside it (echoing the ones on the stairway in the film) are of David Niven and Emeric Pressburger.

*In two episodes of they use the view through a closing eye as someone is prepared for an operation. [, Episode "Homer's Triple Bypass" (Season 4, episode 11)] [, Episode "Homer Simpson In - Kidney Trouble" (Season 10, episode 8)]