A White Sport Coat and a Pink Crustacean

A White Sport Coat and a Pink Crustacean 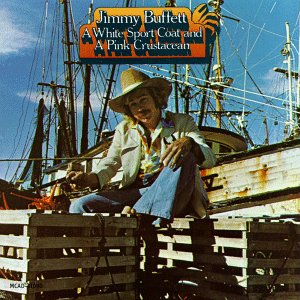 "A White Sport Coat and a Pink Crustacean" is the third by American popular music and the first major label album in Buffett's -produced "Key West phase." It was initially released in June 1973 as Dunhill DS-50150 and later rereleased on Dunhill's successor labels ABC and MCA.

The title of the album is a play on the country song "A White Sport Coat and a Pink Carnation" by and it contains several of what would later become Buffett's most popular songs. The album was recorded at singer 's studio in . It marks the first reference to Buffett's backup band as "The " and is the first album that long time Reefers and play on.

All of the songs on "A White Sport Coat and a Pink Crustacean" were written or co-written by Buffett.

The most well-known song of the album, the novelty "," was originally released as a (b/w "The Great Filling Station Holdup") and inspired some controversy at the time due to its lyrics. Buffett wrote "Why Don't We Get Drunk" and is credited with playing s and beer cans on the album under the pseudonym Marvin Gardens, derived from a property on the original Atlantic City version of the Monopoly game board, actually named .

"He Went to Paris" is perennial fan favorite ballad, appearing on most of Buffett's greatest hits collections. It was remade by in 1980 and by Buffett himself for his 2003 "".

Both Buffett and wrote "Railroad Lady." Walker recorded the song a year earlier than Buffett and it was later further popularized by , , and .

Although it was not extremely commercially successful at the time of its release, "A White Sport Coat and a Pink Crustacean" is generally considered one of Buffett's better albums and the beginning of his success. Johnny Loftus of argues that "while it still lies much closer to Nashville than Key West," the album "does begin to delineate the blowsy, good-timin' Key West persona that would lead him to summer tour stardom" and is "highly recommended for Buffett completists and those interested in his more introspective side." [ [http://wm11.allmusic.com/cg/amg.dll?p=amg&token=ADFEAEE57D19DF4FA47720C5B2325DDDA672E101D342F38250234558C0B430498C0C77FD05BADBCAAEF875B47EE3FB24A15F05D7CAFE3681&sql=10:hifqxqq5ldte~T1 All Music Guide] review by Johnny Loftus. Accessed .]