In mathematics, specifically in geometric topology, surgery theory is a collection of techniques used to produce one manifold from another in a 'controlled' way, introduced by Milnor (1961). Surgery refers to cutting out parts of the manifold and replacing it with a part of another manifold, matching up along the cut or boundary. This is closely related to, but not identical with, handlebody decompositions. It is a major tool in the study and classification of manifolds of dimension greater than 4.

More technically, the idea is to start with a well-understood manifold M and perform surgery on it to produce a manifold M' having some desired property, in such a way that the effects on the homology, homotopy groups, or other interesting invariants of the manifold are known.

The classification of exotic spheres by Kervaire and Milnor (1963) led to the emergence of surgery theory as a major tool in high-dimensional topology.

Surgery on a manifold

Recall that in general, if X, Y are manifolds with boundary, then the boundary of the product manifold is

. The basic observation which justifies surgery is that the space

can be understood either as the boundary of

or as the boundary of

Now, given a manifold M of dimension n = p + q and an embedding

, define another n-dimensional manifold M' to be

, or by a p-surgery if one wants to specify the number p. Strictly speaking, M' is a manifold with corners, but there is a canonical way to smooth them out. Notice that the submanifold that was replaced in M was of the same dimension as M (it was of codimension 0).

Surgery is closely related to (but not the same as) handle attaching. Given an (n + 1)-manifold with boundary

The manifold L' is obtained by attaching a (p + 1)-handle, with

A surgery on M not only produces a new manifold M', but also a cobordism W between M and M'. The trace of the surgery is the cobordism (W;M,M'), with

the (n + 1)-dimensional manifold with boundary

obtained from the product

Surgery is symmetric in the sense that the manifold M can be re-obtained from M' by a (q − 1)-surgery, the trace of which coincides with the trace of the original surgery, up to orientation.

In most applications, the manifold M comes with additional geometric structure, such as a map to some reference space, or additional bundle data. One then wants the surgery process to endow M' with the same kind of additional structure. For instance, a standard tool in surgery theory is surgery on normal maps: such a process changes a normal map to another normal map within the same bordism class.

1. Surgery on the circle

As per the above definition, a surgery on the circle consists of cutting out a copy of 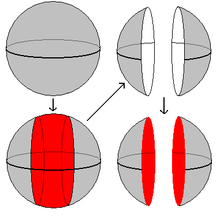 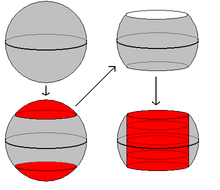 In this case there are more possibilities, since we can start by cutting out either

Fig. 2c. This shape cannot be embedded in 3-space.

3. Surgery on the n-sphere

. The p-surgery on Sn is therefore

. Examples 1 and 2 above were a special case of this.

by a p-surgery. The bordism

can be identified with the trace of this surgery. 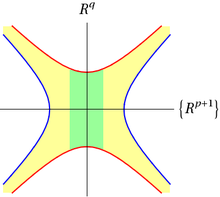 Indeed, in some coordinate chart around the critical point, the function f is of the form

, and p + q + 1 = n + 1. Fig. 3 shows, in this local chart, the manifold M in blue and the manifold M' in red. The colored region between M and M' corresponds to the bordism W. The picture shows that W is diffeomorphic to the union

(neglecting the issue of straightening corners), where

is colored in yellow, and

is colored in green. The manifold M', being a boundary component of W, is therefore obtained from M by a p-surgery.

Since every bordism between closed manifolds has a Morse function where different critical points have different critical values, this shows that any bordism can be decomposed into traces of surgeries (handlebody decomposition). In particular, every manifold M may be regarded as a bordism from the boundary

(which may be empty) to the empty manifold, and so may be obtained from

Effects on homotopy groups, and comparison to cell-attachment

Intuitively, the process of surgery is the manifold analog of attaching a cell to a topological space, where the embedding ϕ takes the place of the attaching map. A simple attachment of a (q + 1)-cell to an n-manifold would destroy the manifold structure for dimension reasons, so it has to be thickened by crossing with another cell.

Up to homotopy, the process of surgery on an embedding

can be described as the attaching of a (p + 1)-cell, giving the homotopy type of the trace, and the detaching of a q-cell to obtain N. The necessity of the detaching process can be understood as an effect of Poincaré duality.

. Two points are important however: Firstly, the element

has to be representable by an embedding

(which means embedding the corresponding sphere with a trivial normal bundle). For instance, it is not possible to perform surgery on an orientation-reversing loop. Secondly, the effect of the detaching process has to be considered, since it might also have an effect on the homotopy group under consideration. Roughly speaking, this second point is only important when p is at least of the order of half the dimension of M.

Application to classification of manifolds

More formally, one must ask whether up to homotopy:

It turns out that the second ("uniqueness") question is a relative version of a question of the first ("existence") type; thus both questions can be treated with the same methods.

In the classical approach, as developed by Browder, Novikov, Sullivan and Wall, surgery is done on normal maps of degree one. Using surgery, the question "Is the normal map

of degree one cobordant to a homotopy equivalence?" can be translated (in dimensions greater than four) to an algebraic statement about some element in an L-group of the group ring Z[π1(X)]. More precisely, the question has a positive answer if and only if the surgery obstruction

is zero, where n is the dimension of M.

For example, consider the case where the dimension n=4k is a multiple of four, and π1(X) = 0. It is known that L4k(Z) is isomorphic to Z; under this isomorphism the surgery obstruction of f maps, up to a scalar factor, to the difference of the signatures σ(X) − σ(M) of X and M. Hence a normal map of degree one is cobordant to a homotopy equivalence if and only if the signatures of domain and codomain agree.

The concept of structure set is the unifying framework for both questions of existence and uniqueness. Roughly speaking, the structure set of a space X consists of homotopy equivalences

from some manifold to X, where two maps are identified under a bordism-type relation. A necessary (but not in general sufficient) condition for the structure set of a space X to be non-empty is that X be an n-dimensional Poincaré complex, i.e. that the homology and cohomology groups be related by isomorphisms

of an n-dimensional manifold, for some integer n. Depending on the precise definition and the category of manifolds (smooth, PL, or topological), there are various versions of structure sets. Since, by the s-cobordism theorem, certain bordisms between manifolds are isomorphic (in the respective category) to cylinders, the concept of structure set allows a classification even up to diffeomorphism.

In the topological category, the surgery exact sequence is the long exact sequence induced by a fibration sequence of spectra. This implies that all the sets involved in the sequence are in fact abelian groups. On the spectrum level, the surgery obstruction map is an assembly map whose fiber is the block structure space of the corresponding manifold.