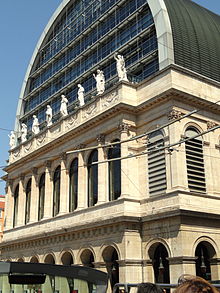 Opéra National de Lyon is an opera company in Lyon, France which performs in the Nouvel Opéra, a modernized version in 1993 of the original 1831 opera house.

The inaugural performance of François-Adrien Boïeldieu's La Dame blanche was given on 1 July 1831. The Nineteenth and Twentieth Centuries saw some significant French premieres of major operas including Richard Wagner's Die Meistersinger in 1896, Giordano's Andre Chenier in the following year, and Moussorgsky's Boris Godunov in 1913. In addition, many world premieres such as Arnold Schoenberg's Erwartung (1967) have been presented.

In the years after the 1969 appointment of Louis Erlo as general director, many innovative productions and premieres of both French operas and Twentieth Century operas have been staged. Two significant French artists who have been associated with the Opéra in recent years are the stage director, Laurent Pelly, and the soprano, Natalie Dessay.

Past principal conductors at the company have included André Cluytens, John Eliot Gardiner, Kent Nagano, Louis Langrée, and Iván Fischer. Since 2008, the principal conductor is Kazushi Ono, with an initial contract of 5 years.[1]

The associated Lyon Opera Ballet has a postmodern and contemporary repertoire under artistic director Yorgos Loukos.

At the front of the Opéra are 8 statues of the Muses, but Urania is missing. There are two major reasons for the omission: symmetry, and the fact that Urania is not related to the arts performed in the Opéra.

The company maintains its own permanent orchestra, choir and ballet as well as technical, costume and scenery departments. Independent artists (directors, soloists) are engaged for particular productions. Preparation for a production starts two years before the first night.[2]

The orchestra was created in 1983. Among its recordings are world premières, complete versions and rarely recorded works.[2]

The choir has been conducted since 1995 by Alan Woodbridge. It performs in choral concerts as well as in operas and comprises thirty four regular singers.[2]

The childrens' choir, La Maîtrise (masterclass) was created in 1990 to form a top-level choir of young soloists. Since 1993 it has a status similar to other French musical schools. Its members take part in opera company performances.[2]

The Lyon Opera Ballet (Ballet de l'Opéra de Lyon) has a "classical structure directed towards contemporary dance",[3] with a repertoire of American postmodern dance, various contemporary dance styles and the jeune danse française (new French dance), but also including "the radical rereading of some standard works".[4] The current artistic director is Yorgos Loukos. The dance studio is situated immediately under the curved glass roof of the opera house.[2]

For more details on the opera house, see Opéra Nouvel.

A first theater was built here by Soufflot during the 18th century. Nevertheless, the theatre soon became too small and the architects Chenavard and Pollet rebuilt a brand new one in a neo-classical style in 1830.

At the beginning of 1980s, out of age and not meeting the needs any more, the Opera had to be renewed. A competition for architects was thus launched and won in 1986 by Jean Nouvel. The new Opera of Lyon was inaugurated in May 1993 and is now part of the international architectural heritage. Outside the opera house, Nouvel only kept the outer walls. He also dug new underground levels and added a semi-cylindrical dome that is used by dancers. On the opera house front wall, 8 muses have been kept in place (Uranie, the 9th one was removed to respect the symmetry of the building).