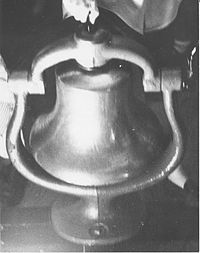 The Monon Bell (pronounced MOE-non) is the trophy awarded to the victor of the annual college football matchup between the DePauw University Tigers (in Greencastle, Indiana) and the Wabash College Little Giants (in Crawfordsville, Indiana) in the United States. The Bell is a 300-pound locomotive bell from the Monon Railroad. As of the end of the 2011 season, the two teams have played against each other 118 times. Wabash leads the all-time series, 56-53-9, while the series is tied since the Bell was introduced as the victor's trophy in 1932, 37-37-6.

The rivalry between Wabash, an all-male school, and DePauw began in 1890 and is the oldest college football rivalry west of the Alleghenies where more than 100 games have been played. The Monon Bell was introduced as a traveling trophy in 1932 at the suggestion of a DePauw alumnus, Orien Fifer (Class of 1925), in a letter to the editor of The Indianapolis News. Since the schools are only 27 miles apart, the adversaries in the game are often brothers, cousins, high school classmates or good friends, adding to the rivalry’s intensity. Before the introduction of overtime to college football, nine ties were logged in the series. By rule, in the event of a tie, the Bell was awarded to the previous owner. In the 1960 matchup, DePauw held the Bell and scored a last-minute touchdown to cut Wabash's lead to 13-12. DePauw coach Tommy Mont turned to the stands and spread out his hands. The DePauw fans shouted "Go!" DePauw scored on the conversion and won 14-13. This rule last held significance for the 99th Monon Bell Classic in 1992 in which from the 8 yard line Wabash opted for a field goal to tie the game at 17-17 and retained ownership of the Bell. This tie set up the 100th game as an evenly split 45-45-9 series.

The teams failed to play each other only 5 years in the entire history. From 1897-1899, the schools failed to schedule each other for an unknown reason. In 1910, the teams didn't play due to the death of Wabash's star halfback, Ralph Lee Wilson, who died from a concussion in a game earlier in the season. The schools have played each other every year since 1911.

The Monon Bell Classic is the name of the college football rivalry between Wabash College and DePauw University. Named after the trophy awarded to the winner (the Monon Bell), it is the sixth most-played Division III rivalry and equals the 12th-most played in college football.[1] To date, there have been 118 total games played between the two teams, resulting in a lead for Wabash at 56-53-9.[2]

The game has received national media coverage including articles in Sports Illustrated in 1973 and 1993, a feature on Charles Kuralt's 1979 "Sunday Morning" show, articles in USA Today in 1987 and the Wall Street Journal in 1999 and a feature on Fox Sports Net's show The Slant in 1999.

The game is regularly televised and past battles have been seen on ABC, ESPN2, and HDNet. Annually, alumni parties are held in about 50 cities across America where loyal fans from both schools gather to watch the game. In May 2007, a three-year agreement was announced with HDNet to televise the game through 2009.[3] A three-year extension announced in 2010 will keep the game on HDNet through 2012.

Listed below are the all-time Monon Bell Classic results, with Wabash victories shaded in scarlet ¦¦ and DePauw victories are shaded in old gold ¦¦.[2]

Prior to the 1965 meeting between the two teams, Wabash student Jim Shanks '67 scheduled a meeting with DePauw University President William H. Kerstetter, claiming to be representative from the US Information Service in Mexico City. During the meeting with Kerstetter, Shanks was able to convince the president to offer two full scholarships for Mexican students. To "seal the deal" Shanks asked to take photos of various points of interest on campus to show the "prospective" Mexican students more about DePauw University.

One item Shanks asked to photograph was the Monon Bell, in the Tigers' possession after a 22-21 victory in 1964. The dean of the college was the only person on campus who knew the location of the Bell, but was reluctant to tell Shanks of its location. "I don't know whether I should show this to you or not," he said with laugh. "The last time I showed it to someone, they stole it."

Taking Shanks to the second floor of a quonset hut near the football field, Shanks took careful notes that were provided to a group of Wabash students who entered the building and took the Bell back to Crawfordsville. The Bell was eventually "found" by the Wabash administration and returned to DePauw the day before the 1965 game.

Saturday afternoon the Little Giant football team made certain it was a short visit. Wabash defeated DePauw 16-6. After every Wabash touchdown, the Wabash fans cheered "Ole!" At the conclusion of the game Wabash fans stormed the field, many wearing sombreros and ponchos, throwing taco shells onto the field and wielding posters congratulating President Kerstetter for the loss of the Bell and the two scholarship offers.

Another famous heist saw DePauw students stealing the bell from themselves. Concerned about the safety of the Bell from Wabash kidnappers, a group of DePauw students stole the bell from its resting place and buried it in the north end zone of DePauw's Blackstock Stadium. Very few students knew of its location, and many mistakenly believed it had been kidnapped by Wabash students. A problem arose on the Monon Bell Classic game day when cold temperature caused the ground to freeze. The DePauw students were barely able to reclaim the Bell in time for the game.

The Bell was last stolen in 1998 by Wabash students on Halloween.

Notably, the rivalry is still very strong: in 1998, after DePauw had secured the Bell, a fracas broke out on the field of Wabash's Byron P. Hollett Little Giant Stadium. During the fiasco, DePauw students pulled down one of the Little Giants' goal posts. The Little Giant student body retaliated by charging the field, which was eventually erupted into a brawl. The melee was broken up by the local police, which used pepper spray to contain the crowds. As a result, following Monon Bell Classics have been played with added security and segregated fan sections.

One other failed heist occurred by DePauw students. They had succeeded in stealing the bell and had the bell loaded into their car when their car wouldn't start. They were caught red-handed with the bell. They assumed that they would only get a slap on the wrist for the attempted heist. However, the students from DePauw got 1000 hours of community service.

In 2002, utilizing video and film from DePauw University's archives, the first "Monon Memories" -- short (40 second to 2:30) video summaries of past battles for the Bell—were produced. The initial goal was to create 15-20 short vignettes which could be used during timeouts of the game's national telecast each year. On October 2, 2008, DePauw's Executive Director of Media Relations, Ken Owen—who launched the "Memories" project and created each clip—finished the 1890 segment. As a result there is a video for each of the 117 football battles between DePauw and Wabash. The videos—which feature vintage photos and, when available, film or videotape—are available for viewing at DePauw's Web site (link below) and many are included in each year's special edition DVD of the Monon Bell Classic. "Monon Memories" were featured in the November 7, 2008 edition of The Chronicle of Higher Education.

The Ballad of the Monon Bell

The Ballad of the Monon Bell was introduced the week of the 1985 game at DePauw. The music is by Nancy Ford Charles (DePauw 1957), and the lyrics are by Darel Lindquist (DePauw 1968). The concept of the ballad originated with Patrick Aikman (DePauw 1957). The ballad has been recorded by Jim Ibbotson (of the Nitty Gritty Dirt Band) (DePauw 1969). A video, originally created in 1985, was recut in 2007 after tape was found containing a stereo version of the song. A 1985 demo of the song was also found in 2009. (See external links below for an MP3 and MOV of the song.)

Long before the cannonball traveled through her towns
The state of Indiana owned the jewel of the crown
The train, they called the Monon, the stories they still tell
The Cavemen and the Tigers playing for her bell

It rode like a masthead on engine ninety-nine
Crawfordsville to Greencastle, then further down the line
The Cavemen came from Wabash, the Tigers from DePauw
Since eighteen-ninety they have played the last game ev’ry fall

Many years they played for pride, oh the stories they could tell
Then in thirty-two the Monon train gave up her precious bell
They said, “Here take this symbol of smoke and fire and grit
And give it to the winner, a symbol not to quit.”

Suddenly the boys of autumn had fire in their eyes
Blood and spit, but never quit, fighting for the prize
The medal to the victor, the symbol to the school
Wabash and DePauw became a yearly duel