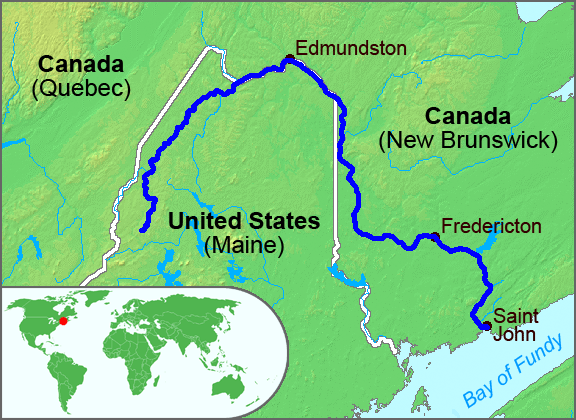 caption = The course of the St. John River
origin = Northwestern
mouth = at Saint John, NB
basin_countries = ,
length = 673 km (418 mi)
elevation = 360 m (1,181 ft)
discharge = 990 m³/s (35,000 ft³/s)
watershed = 54,986 km² (21,230 mi²)The Saint John River (French "Fleuve Saint-Jean") is a river, approximately 418 mi (673 km) long, located in the of and the of . It forms part of the in two places along its length. The river drains an area of approximately 55,000 km², of which slightly more than half is located in New Brunswick. The Saint John is also the second longest river on North America's Atlantic coastline (between the and the ). Only the Susquehanna is longer. The lower section of the river from Fredericton to Saint John is nicknamed the "Rhine of North America" in reference to its popularity for recreational boating [http://www.google.ca/search?hl=en&client=firefox-a&rls=org.mozilla%3Aen-US%3Aofficial&hs=f9V&q=%22Rhine+of+North+America%22+Saint+John+River&btnG=Search&meta=] .

The Saint John rises in Somerset County in northwestern Maine and flows northeast through western Aroostook County for a distance. Near Allagash, it is joined by the . The portion of the Saint John River that lies entirely in is essentially a wilderness waterway. Below St. Francis, the Saint John begins to form part of the between Maine and New Brunswick.

Continuing its northeast course, the river passes , and then flows between , and , where it turns southeast, then passes between , and . Near , the river enters entirely into New Brunswick, and changes direction to flow due south through the fertile , framed by the rising hills of the Appalachian range in Victoria and Carleton counties. At Perth-Andover, the river is joined by the Aroostook and the Tobique rivers. At Hartland, it is crossed by the longest covered bridge in the world.

. South of Fredericton the river becomes broad and shallow and it meanders through many low islands used for pastureland during dry periods in summer and fall.

South of the Jemseg, the Saint John River is surrounded by the low hills of the St. Croix Highlands - another component of the Appalachian range and it is joined by several lateral bays, including ; then the and the . The St. John discharges into the at the industrial city of Saint John. At the river's mouth, there is a unique phenomenon caused by the high tides of the Bay. These tides are the highest in the world and cause the river to reverse its flow twice a day in a narrow gorge in the city's centre, creating the .

Members of the Nation, whose lands and culture have been and are still centered on the Saint John River have historically called the river "Wolastoq", translating to "good and beautiful river". In 1604, parts of the lower river were explored by and . Champlain named the river after because he reached the river's mouth on the saint's feast day, .

The river valley formed an important part of the French colony of . settlements developed along the lower river during the 17th and 18th centuries; including Fort la Tour (Saint John) and Fort Sainte-Anne (). The area fell under English control during the , after the English capture of Fort Sainte-Anne in 1759. In 1784, many loyalist refugees from the settled in Saint John, Fredericton, and along the river at settlements such as Queensbury and Woodstock. The new English colony of was created shortly afterwards and Fredericton was named the capital. In 1785, Acadians created the first colony in the Upper Saint-John River valley, near what is now Edmundston. English settlement of the fertile Upper River Valley would not occur until the early to mid 19th century. A Danish community (New Denmark) was established in the late 1800s. Meanwhile, francophone ers settled the region, also during the 19th century, travelling southwards along traditional routes. They joined the Acadians who were already settled in the area. The Madawaska section of the river valley remains heavily francophone to this day.

The river was an important trade route for the French, English and traders throughout the 17th and 18th centuries. The tremendous flow rate of the river and its tributaries during the spring aided the development of the timber industry in western New Brunswick as the river became a conduit for log drives to saw and pulp mills in the south.

can cause extensive flooding during the spring break-up.

The Saint John River has been of tremendous importance to the development of western New Brunswick because it served as a transportation artery, particularly prior to the era of when paddle wheelers plied its waterways.

During the 1950s and 1960s, the river became a major source of with the opening of the in 1955 and the in 1968 where large reservoirs have been created by damming its flow. These massive projects followed the construction of a smaller dam at Grand Falls in 1925, where the river descends in a steep cataract. A consequence of the latter two dams has been a severe decline in migrating , and the flooding of farmland to create the headponds.

In recent years, the river has seen a rise in recreational boating and . The rich soil of the Upper St. John River Valley in Carleton and Victoria counties as well as , is also an important area for the cultivation of .