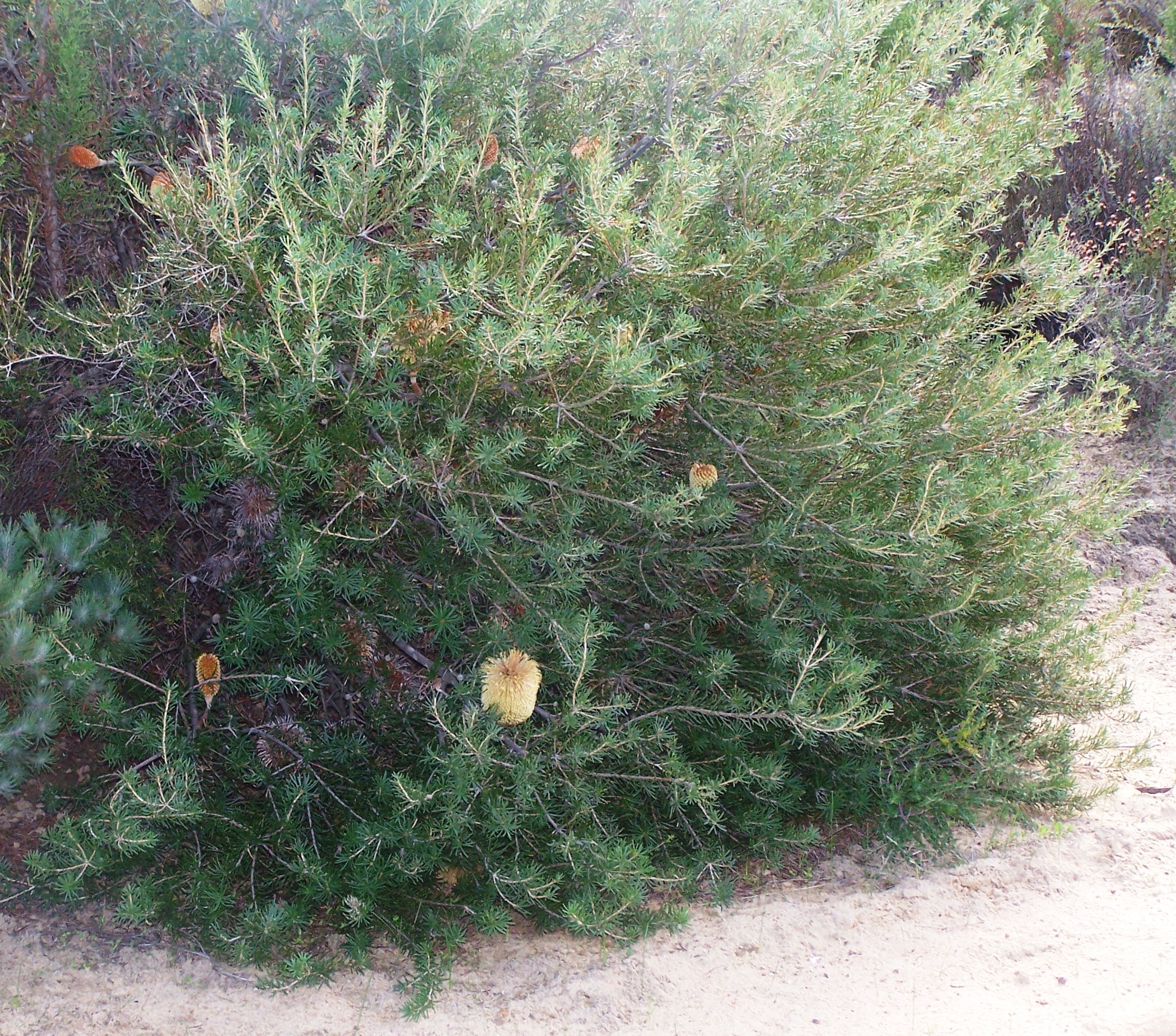 The shrub grows amongst in seasonally wet lowland areas of the coastal sandplain between Badgingarra and Serpentine in . A little studied species, not much is known of its or . Reports do suggest, however, that it is pollinated by a variety of birds and small mammals. Like many members of series ""Abietinae"" it has not been considered to have much horticultural potential and is rarely cultivated.

"B. telmatiaea" grows as an upright bush up to two metres (7 ft) high. It has hairy stems and branchlets, and straight, narrow leaves from 1½ to three centimetres (½–1 in) long and about a millimetre (frac|1|16 in) wide.

Flowers occur in "flower spikes", s made up of hundreds of flower pairs densely packed around a woody axis. "B. telmatiaea"'s inflorescences are roughly spherical, with a diameter of three to five centimetres (1–2 in). It contains between 500 and 900 golden brown to pale brown flowers,

The fruiting structure is a stout woody "cone", with a hairy appearance caused by the persistence of old withered flower parts. This may be embedded with up to 70 woody follicles, each of which contains a single seed. As with other "Banksia" species, only a small proportion of flowers go on to form follicles; in the case of "B. telmatiaea", the proportion is around 4% for those "cones" that set some fruit. However, about 80% of fruiting structures set no fruit at all. According to , "there [is] no obvious reason on the basis of morphology of pollination for this lack of seed set".

"B. telmatiaea" was first collected around 1840 by and James Drummond. For many years it was included in "B. sphaerocarpa", but by 1980 it was recognised as a distinct species. In recognition of its distinctness from, yet affinity with, "B. sphaerocarpa", it was for a time informally referred to as "Banksia" aff. "Sphaerocarpa".

George placed "B. telmatiaea" in subgenus "Banksia" because its inflorescence is a typical "Banksia" flower spike, section "Oncostylis" because it has hooked styles, and series "Abietinae" because its inflorescence is roughly spherical. He considered its closest relative to be "B. leptophylla" (Slender-leaved Banksia), which differs from "B. telmatiaea" in having longer leaves and larger flowers; yet in his arrangement he placed it between "B. scabrella" (Burma Road Banksia) and "B. laricina" (Rose-fruited Banksia).

In 1996, and Pauline Ladiges published the results of a cladistic analysis of morphological characters of "Banksia". They retained George's subgenera and many of his series, but discarded his sections. "B." ser. "Abietinae" was found to be very nearly monophyletic, and so retained. It further resolved into four subclades, so Thiele and Ladiges split it into four . "B. telmatiaea" appeared in the third of these:

Thiele and Ladiges' arrangement was not accepted by George, and was largely discarded by him in his 1999 arrangement. "B." ser. "Abietinae" was restored to George's 1981 circumscription, and all of Thiele and Ladiges' subseries were abandoned. However, "B. telmatiaea" was moved in the to between "B. grossa" (Coarse Banksia) and "B. leptophylla", thus better according with the affinity with "B. leptophylla" claimed by George in 1981.

Since 1998, has been publishing results of ongoing cladistic analyses of data for the subtribe . His analyses suggest a phylogeny that is very greatly different to George's arrangement. With respect to "B. telmatiaea", Mast's results accord closely with Thiele and Ladiges' arrangement, inferring a clade consisting of "B. leptophylla", "B. telmatiaea", "B. scabrella" and "B. lanata", with "B. grossa" (Coarse Banksia) as the nearest :

"B. telmatiaea" grows only in the , and biogeographic regions, inland from the coast but never east of the . It occurs from Hill River near Badgingarra in the north, to Serpentine in the south. Most populations occur north of or south of Cannington, there being only a few scattered populations in between.

The species favours lowland areas that are seasonally wet but never inundated, such as the margins of s and . For example, in the , where parallel sand s cross a clay flat, "B. telmatiaea" occurs neither in the lowest parts of the flat, where seasonal inundation occurs; nor on the tops of the ridges, where the drainage is good; but it is one of the most abundant plants of intermediate habitats, on ridge slopes and in higher areas of the clay flat.

Favoured soils are deep grey sandy loams or shallower sand overlying . Associated vegetation is typically or , although moisture-loving trees such as "B. littoralis" (Swamp Banksia) or "" (Moonah) may also be present, sometimes in sufficient numbers to form a low open .

Like most other , "B. telmatiaea" has s, roots with dense clusters of short lateral rootlets that form a mat in the soil just below the leaf litter. These roots are particularly efficient at absorbing nutrients from nutrient-poor soils, such as the -deficient native soils of .

Unlike many "Banksia" species, "B. telmatiaea" lacks a , so plants are killed by bushfire. However, it is adapted to release its aerial bank of seeds following a bushfire, and so regenerates rapidly.

Four species of bird have been observed visiting the flowers of "B. telmatiaea": "" (Red Wattlebird), "" (Silvereye), "" (New Holland Honeyeater) and the "" (Brown Honeyeater). The introduced "" (European Honey Bee) is also commonly observed, and visits by s and "Hylaeus" plasterer bees have been recorded. Visits by nectarivorous s have not been directly observed, but their involvement in pollination is certain, as their scats have often been found on inflorescences,

Reproductive success is strongly affected by insects that infest the flower spikes and fruiting structures. Infestation of the flower spikes is not as severe as in other "Banksia" species: one study found less than 10% of "B. telmatiaea" inflorescences to be infested, compared to over 50% for "B. attenuata" (Candlestick Banksia), "B. littoralis" and "B. menziesii" (Menzies' Banksia), and over 90% for "B. grandis" (Bull Banksia). Also, whereas other species were attacked by a range of insects, the inflorescence of "B. telmatiaea" was attacked only by the "" (Banksia Boring Moth), which burrows into the woody axis, rendering the spike barren. On the other hand, the same study observed heavy infestation of fruiting structures, with over 90% of spikes with follicles found to contain at least one larva of an unidentified species of "". These larvae burrow from follicle to follicle to eat the seed, resulting in 100% seed loss for infested spikes.

"B. telmatiaea" is one of five "Banksia" species, all closely related to "B. sphaerocarpa", that have highly unusual flower . Whereas other "Banksia" species produce nectar that is clear and watery, the nectar of these species is pale yellow initially, but gradually becomes darker and thicker, changing to a thick, olive-green mucilage within one to two days of secretion.

"B. telmatiaea" is a fairly secure species, as most populations are of more than 100 plants, and 26% of known plants are in conservation reserves. Its proximity to Perth suggests that land clearing for urban development could pose a threat, and in 1988 "" recommended that "the species should continue to be monitored since land clearing could change the situation greatly, particularly amongst its northern populations." It is also known to be susceptible to dieback caused by the introduced plant "", a soil-borne that causes root rot.

In 1987, George applied the Rare or Threatened Australian Plants () criteria to the species, determining it to have a conservation status of "3R": a rare species found only in small populations, but not considered endangered or vulnerable. Western Australia's Department of Environment and Conservation do not consider it to be rare, however, and have not included it on their .

"B. telmatiaea" is rarely cultivated. It grows fairly quickly, but tends to become untidy as it ages. The flower spikes, though attractive, occur within the bush where they are usually obscured by foliage. In its natural habitat it flowers prolifically over several months, but according to George it may be reluctant to flower in cultivation. It tolerates light pruning not below the green foliage. George recommends a sunny position in poorly drained soil, preferably with moisture in winter.