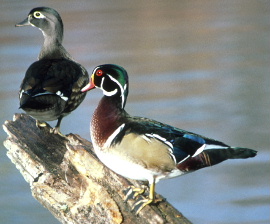 The genus belongs to the family in the waterfowl order . They were formerly placed in the "s", a group somewhat intermediate between s and s, and it is not quite clear whether they should be placed in the (dabbling duck) or (shelduck) . [cite journal |author=Johnson, Kevin P. & Sorenson, Michael D.|year=1999|title=Phylogeny and biogeography of dabbling ducks (genus "Anas"): a comparison of molecular and morphological evidence |journal=Auk |volume=116 |issue=3 |pages=792-805|url=http://elibrary.unm.edu/sora/Auk/v116n03/p0792-p0805.pdf PDF fulltext |accessdate=2008-09-02] [cite book |author=Madge, Steve & Burn, Hilary.|year=1987|title=Wildfowl : an identification guide to the ducks, geese and swans of the world|publisher=Christopher Helm|location=London|isbn=0-7470-2201-1]

The two species are generally considered to be very attractive, particularly the multi-coloured drakes. Wood Ducks are a n species, [http://www.npwrc.usgs.gov/resource/1999/woodduck/wdrange.htm] occurring mainly in the eastern half of the , and from southern to northern . Mandarin Ducks are an n species mainly in and , but there is an important feral population in the . Both species migrate from the northern parts of their respective ranges to winter in the south of the range. They inhabit quiet wooded streams and ponds.

The genus shows marked (differences between the sexes), with the females being smaller and less colorful.

Wood Ducks are reproductively capable around the age of one year. They are monogamous for the season. Mating occurs between February and April, depending on latitude. The clutch size is between 6 and 15, and the incubation period is about 30 days. The young are precocial. They venture from the cavity nest [http://www.hiltonpond.org/images/DuckWoodEggs01.jpg] at one day old and are cared for by the mother for about 60 days. The young have a very high mortality rate. Wood Ducks normally live 3 to 4 years.

Mandarin Ducks are also monogamous. The courtship ritual, like the plumage, is rather showy. The female lays between 9 and 12 eggs in a cavity nest, [http://www.friendsofdagnampark.org.uk/pictures/mandarin.jpg] then incubates them for about 30 days. Parental care by the mother is a little shorter in this species, lasting about 40 days.

Both species are threatened by loss of habitat. As human development continues to expand, the woodland areas preferred by these ducks continues to shrink. The Mandarin Ducks may number less than 20,000.