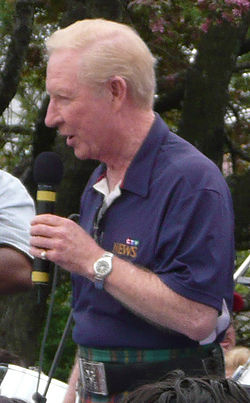 David "Dave" Devall is a retired Canadian weather reporter for the television station CFTO-TV in Toronto. He served in this capacity for more than 48 years beginning in 1961, and was recognized as having had the "longest career as a weather forecaster" by Guinness World Records and the World Records Academy upon his retirement on April 3, 2009.[1][2] Devall was also a recipient of the RTNDA's life time achievement award in 2009 [3]

Devall was born, raised, and educated in Toronto (graduate of York Memorial Collegiate in the old City of York). While studying Radio and Television Arts at Ryerson Polytechnic (now Ryerson University), he also served in the Royal Canadian Air Force (RCAF), where part of his training centred on meteorology. In 1956, while still a student, he worked at CFPL-TV in London, Ontario; he then moved to Toronto radio station CFRB, where he stayed from 1957-1958. After graduating in 1958,[4] he worked at CHEX-TV in Peterborough. When CFTO launched in 1961, Devall auditioned with 2,000 other hopefuls; he was one of six people hired as a broadcaster, and he started at the station on January 7 of the same year.

Devall's voice was heard across Canada as Jim Perry's announcer on many of his game shows, including Definition, Headline Hunters and Eye Bet, as well as in Ford television commercials on the popular Hockey Night in Canada program.

In 1975, Devall was offered a hosting position with ABC's Good Morning America; he turned down the offer and remained with CFTO-TV.

Despite various new weathercasters, Devall remained the chief weather presenter at CFTO until his retirement, and also appeared daily on co-owned CTV Newsnet to present the national weather forecast. His funny antics have made him popular with Toronto viewers. During his early years at the station, he presented the weather forecast from behind a clear acrylic glass weather map, which necessitated writing backwards with a slightly pink eye shadow type marker. After electronically generated weather maps were introduced, he continued the tradition with a single daily weather word.

Devall was made an honorary colonel of the Canadian Forces Squadron 436 at CFB Trenton in February 2007.[4]

Devall retired on April 3, 2009. Two days earlier, it had been announced that Devall had set the newly created Guinness World Record for the "longest career as a weather forecaster" at 48 years, 2 months, and 27 days.

As part of his send-off, CFTO and the City of Toronto announced that the roadway leading to CTV's Toronto studios, Channel Nine Court, had been temporarily renamed "Dave Devall Way" in his honour.[5][6]

Following retirement, Devall has made appearances in television commercials for local businesses, including Loblaws.