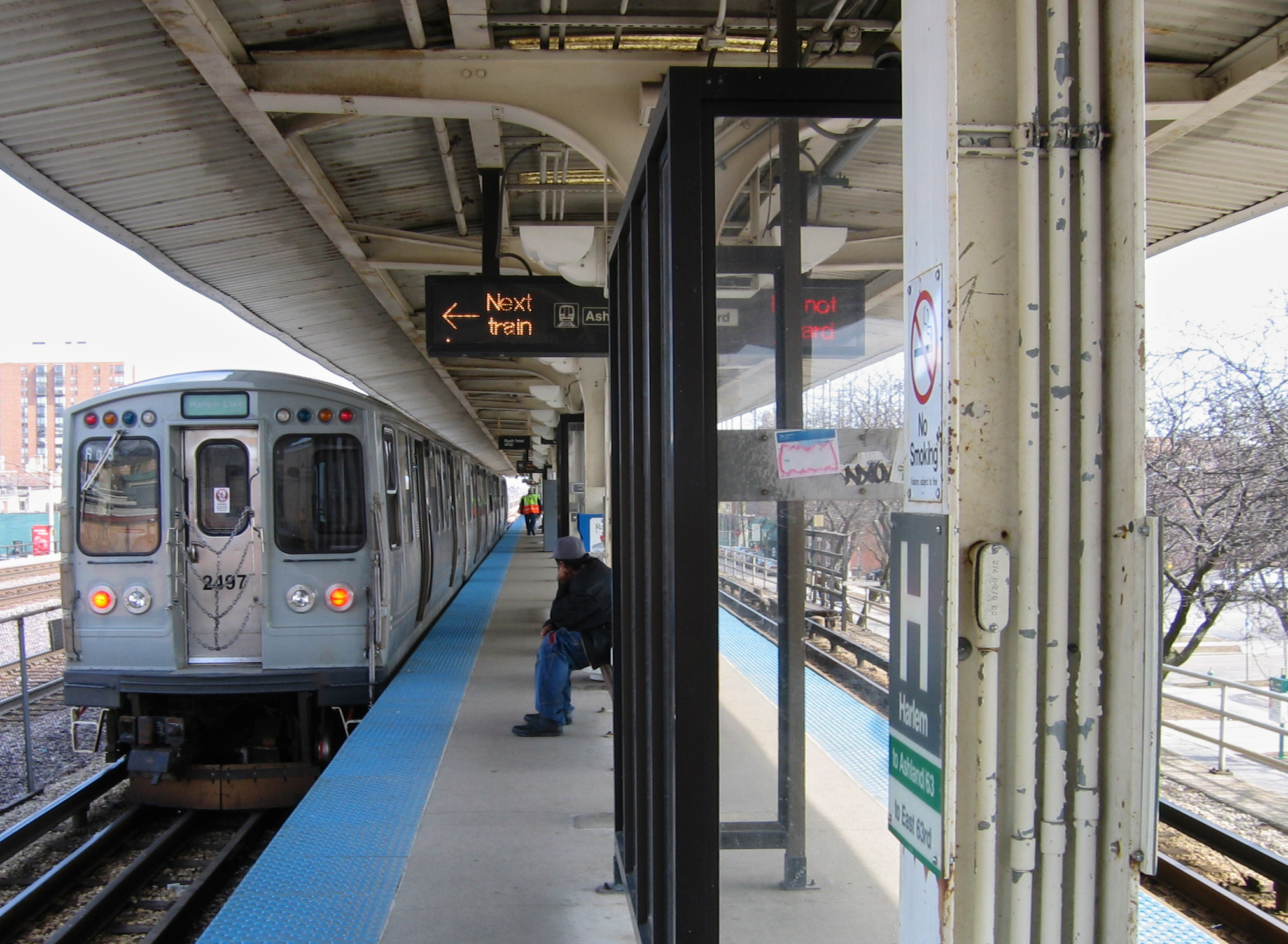 CTA Green Line|The Green Line (Lake-Englewood & Lake-Jackson Park Services) is part of the CTA system known as the . It is the only completely elevated route in the 'L' system. [ [http://world.nycsubway.org/us/chicago/green.html World.nycsubway.org-Chicago-Green Line] ] It utilizes the system's oldest segments (dating back to 1892), extending 20.8 miles with 29 stops between Forest Park and Oak Park (Harlem/Lake), through Chicago's Loop, to the South Side and Englewood (Ashland/63rd) and Woodlawn (Cottage Grove/63rd).

Beginning at the yard and inspection facilities in Forest Park, the Green Line runs east through Oak Park towards the city on an embankment parallel to 's Union Pacific West Line tracks from the Harlem Avenue terminal (7200 W. - 400 N.), on the border of Oak Park and River Forest, to a point just west of Laramie Avenue. Here the Green Line tracks leaves the railroad embankment and continues east on a steel elevated structure directly above Lake Street, a major east-west thoroughfare. The 'L' bridges a couple of railroad tracks before entering downtown Chicago at Clinton Street. East of Clinton Street, the route bridges 's railroad tracks (which terminate just south of here at ) and the before joining the Union Loop 'L' tracks at Wells Street.

In downtown Chicago, the Green Line operates over the famous Union Loop 'L' structure along with Brown Line (Ravenswood), Orange Line (Midway), Pink Line (Douglas), and Purple Line (Evanston Express during Weekday rush hours only) trains. However, Green Line trains operate both ways over the Lake Street and Wabash Avenue sides only, and does not use the Wells Street and Van Buren Street legs of the Loop.

Leaving the Loop, the route heads south along Wabash Avenue and follows an "S" curve (which was realigned in 2002) to the west and south now following the alley between Wabash Avenue and State Street to 40th Street. This is the oldest section (3.8 miles) of Chicago's 'L' system. On this segment, the Green Line shares tracks with the Orange Line between the Loop and 17th Street. Passengers can transfer between the two lines at Roosevelt/Wabash station. The only other station on this section is at 35-Bronzeville-IIT (which is 2.5 miles south of Roosevelt/Wabash) adjacent the campus and the Headquarters. At 40th Street, the route turns east to Indiana station, then turns south between Calumet and Prairie Avenues to the Garfield station and continues south to 59th Street where the route splits into two branches -- the Englewood (Ashland/63rd) Branch and the Jackson Park (East 63rd) Branch.

The Englewood Branch continues south and west following 59th Street, Princeton Avenue and 63rd Street to the Ashland Avenue terminal (1600 W. - 6300 S.) in West Englewood. The yard and inspection shop lie to the south between the old Racine Avenue station and the Ashland/63rd terminal. The 'L' tracks continues west to a stub end at Hermitage Avenue, a provision for a future extension of the route westward, however, those plans were cancelled in the late 1970s. Prior to 1992, the Englewood Branch had three additional stops at Wentworth, Harvard and Racine, but have been since closed due to service curtailments by the CTA. Halsted/63rd is the only remaining intermediate stop on the 3.1 mile route.

The Jackson Park Branch continues south from the mainline between Calumet and Prairie Avenues, passing the old yard and inspection facilities at 61st Street in Washington Park. South of here, the route curves east over and follows it to the current (and more-or-less temporary) terminal at Cottage Grove/63rd (800 E. - 6300 S.). Prior to 1994, the Jackson Park Branch of the Green Line once terminated at University/63rd, and before that, at Stony Island/63rd from 1893 to 1982. In addition to losing the University/63rd station, the Jackson Park Branch also lost the 61st Street station and the 58th Street station (which was a transfer point to the Englewood Branch) in 1994.

Currently, the Green Line is operated only with 2400-Series rail cars, which were built by between 1976 and 1978. These cars are scheduled for retirement after 2010. Occasionally, 3200-Series cars run on the Green Line, though these are loaned from the Brown and Orange Lines, and only appear when the Green Line is short on cars. Trains generally operate at 10 to 12 minute headways during much of the day (about 20 to 25 minutes on the Englewood and Woodlawn branches), with 4 to 6 car trains. There is no overnight service along the Green Line.

The Green Line operates over the two oldest sections of the . The South Side section started operation in 1892 when Chicago was preparing for the of 1893 in Jackson Park. The initial section was built to provide service between downtown Chicago and the exposition site. This first section of the between Wabash Avenue and State Street went into service on , . It extended from Congress Street only as far south as 39th Street (Pershing Road). At that time a large part of the south side was little more than prairie, but by , , when the pioneer 'L' line was completed to Jackson Park, construction of homes, apartment buildings and commercial properties was booming in the area.

Continued expansion of the area development was reflected in construction of the Englewood, Normal Park, Kenwood and Stock Yard branches of the South Side 'L' between 1905 and 1908. Of these, only the Englewood and Jackson Park branches remain: because of insufficient patronage, the Normal Park, Stock Yards and Kenwood branches were closed in the 1950s.The Lake Street Elevated was Chicago's second rapid transit line. It began operation from Madison and Market streets to Lake Street and California Avenue on , . The line was gradually extended westward to Laramie Avenue on , ; to Austin Avenue on , ; to Wisconsin Avenue, Oak Park using street railway trackage on , (closed in 1902), and to Marengo Avenue, Forest Park, on , .

The construction of the Lake Street Elevated led to a political quarrel in suburban Cicero Township, which at the time included Oak Park and Austin. In 1898, Austinites, having a majority on Cicero's town council, used political influence to allow the extension of the Lake Street line from the city border at Laramie Avenue (then called 52nd Avenue) into their community. This infuriated other Cicero Township residents, who retaliated the following year by holding a joint election to force Austin's annexation to the City of Chicago. Much to the dismay of local residents, this effort succeeded, and Austin became part of Chicago in 1899. A century later, Oak Park commuters, who had come to depend on the service, were among the most vocal critics of the Green Line's closure for rehabilitation.

Between 1913 and 1993, the Englewood/Jackson Park branches were part of the North-South Route in various service configurations operating from the north side through the Loop, and to the south side. On , , the Englewood and Jackson Park services were rerouted into the Clybourn-Division-State Subway to provide improved crosstown access through the heart of city and to alleviate congestion on the over-crowded Union Loop Elevated. On , , during the "North-South rapid transit service revision" by the CTA, the Howard-Englewood/Jackson Park route was created, operating via the State Street Subway.

On , , the Englewood branch was extended to the present South terminal at Ashland/63rd. In 1982, the Jackson Park branch was shortened to University Avenue because of structural deterioration at the Dorchester Bridge which carried the route across the and the former Stony Island/63rd terminal was closed , .

The Lake Street 'L' would remain largely unchanged until 1948, when a number of its historic passenger stations were closed and subsequently demolished in an attempt to promote the "A" and "B" skip-stop express train service (discontinued in 1994). On , , the western two and one-half mile section of the line which operated at street level was elevated along the Chicago and Northwestern Railroad right-of-way opening new above-ground stops at Central, Austin, Ridgeland, Oak Park and Harlem/Lake, Forest Park. On , , the Lake Street line was combined with the new Dan Ryan Line to form the West-South Route, operating from Forest Park through downtown via the Union Loop 'L' to 95th/Dan Ryan. The Lake-Dan Ryan routing was to fulfill the service implementation outlined in the 1968 . However, when that controversial subway project was cancelled in 1979, Lake-Dan Ryan service remained, and lasted for nearly 24 years.

On , , the south side sections of the North-South and West-South routes were "switched" south of , creating the present Red Line (Howard-Dan Ryan) and the Green Line (Lake-Englewood/Jackson Park)

On , the Green Line was closed for more than two years for the largest transit rehabilitation project in the city's history. It was reopened , with much of the renewal work completed with the exception of a few stations. Several stations were closed indefinitely following the rehabilitation which angered many commuters who depend on the Green Line. In September 1997, after political pressure brought on by community organizations, the Jackson Park branch was shortened again from University Avenue to Cottage Grove/63rd (East 63rd) after previous attempts by the City, CTA and other agencies to extend the route eastward to Dorchester Avenue, immediately west of the .

On , , the Green Line, like the Purple Line and the Douglas branch of the Blue Line lost its 24 hour service due to budget shortfalls and operates only between the hours of 4 a.m. and 1 a.m weekdays. The Green Line runs 6 a.m. Saturdays and 6:30 a.m. on Sundays

On ,, A derailment was reported. with approximately 24 injuries. Two train cars on the four-car train appeared to be derailed, with the leading car abutting the one behind it at an angle of approximately 150 degrees. The train cars were separated at a switching point near 59th Street. [ [http://cbs2chicago.com/local/green.line.derailment.2.734591.html Several Minor Injuries In Green Line Derailment] ]

The Green Line provides access to, among other destinations, the (Conservatory-Central Park Drive), , and City Hall-Cook County Building (Clark/Lake), (Randolph/Wabash and Madison/Wabash), the (Adams/Wabash), the of , the Museum Campus and (Roosevelt/Wabash), the and (White Sox Park) (35th-Bronzeville-IIT), the (Garfield) and when completed in 2010, the new (Halsted/63rd). The Clinton/Lake and Randolph/Wabash stops are useful for reaching and South Shore Line trains at the and Randolph Street station.