The Man from Colorado

The Man from Colorado 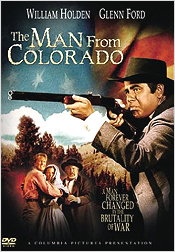 "The Man from Colorado" is a American directed by and starring and .

Near the end of the , Union Colonel Owen Devereaux (Glenn Ford) orders his regiment to open fire on Confederates consisting of about 100 men, though he (and only he) can see that they have signaled their willingness to surrender with a . Afterwards, the colonel hides the white flag under a corpse so that it will not be spotted. However, his best friend and second in command, Captain Del Stewart (William Holden), learns the truth and realizes that the war has unhinged Devereaux's mind.

Before Stewart can do anything, news is received that the war is over, with the treaty signed at . In the celebration, Sergeant Jericho Howard () gets drunk and is insubordinate to the colonel. To restore order and discipline, Devereaux has him arrested and disarmed. There is a ball in town that the entire regiment attends, with the exception of Jericho and two guards. With everyone gone, Jericho takes a gun from the soldiers, steals a horse, and escapes.

When Owen and Del leave the army and return home, Devereaux is appointed the federal judge for the region and appoints Del his marshal. Caroline Emmett () chooses to marry Owen instead of Del. Del hopes that her calming influence and the end of the war will restore his friend's sanity. However, when a Confederate massacre survivor confronts Owen, he shoots the rebel, even though the man had already been subdued.

Meanwhile, Jericho becomes an outlaw, recruiting former soldiers who are angry over losing their land from being absent for more than three years. They raid a gold mine, owned by Big Ed Carter (Ray Collins). Devereaux threatens to hang Jericho's brother, Johnny Howard (), unless he reveals Jericho's whereabouts. Marshal Del Stewart convinces Jericho to turn himself in to save his brother, but as they ride in, they spot Johnny dead, hanging from a tree limb. Del confronts Owen, but his friend is beyond reason. Unwilling to work for the homicidal judge any longer, Del discards his marshal's pin and joins Jericho's band of outlaws.

Caroline reads her husband's diary and learns of his insanity. She takes what she has found to Del and Doc Merriam (). Furious, Owen sets fire to half the town to smoke them out, setting up a final confrontation between the two men.