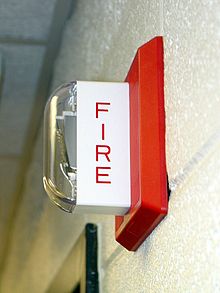 The primary function of the notification appliance is to alert persons at risk. Several methods are used and documented in industry specifications published by UL.[citation needed]

Coding refers to the pattern or tones a notification appliance sounds in and is controlled either by the panel or by setting jumpers or DIP switches on the notification appliances. The majority of audible notification appliances installed prior to 1996 produced a steady sound for evacuation. In general, no common standard at that time mandated any particular tone, or pattern for audible fire alarm evacuation signals. While less common than a steady sound, differing signaling methods were used for the same purpose. These are named with respect to their distinctive structure and include, March Time (usually 120 pulses per minute but sometimes at 90 pulses or 20 pulses per minute, depending on the panel), Hi-Lo (repeatedly changing tone), Slow-Whoop (slow rising sweep upwards in tone) among others.[1] Today these methods are confined to applications intended to trigger a response other than evacuation alone. In 1996, the ANSI and the NFPA recommended a standard evacuation pattern to eliminate confusion. The pattern is uniform without regard to the sound used. This pattern for smoke alarms is named the Temporal-Three alarm signal, often referred to as "T-3" (ISO 8201 and ANSI/ASA S3.41 Temporal Pattern) and produces an interrupted four count (three half second pulses, followed by a one and one half second pause, repeated for a minimum of 180 seconds). CO (carbon monoxide) detectors are specified to use a similar pattern using four pulses of tone (often referred to as T4).[citation needed]

In 1971, Space Age Electronics introduced the first visual notification appliance, the AV32 light plate (which was installed over an existing horn) and V33 remote light. Meanwhile, in 1978, Wheelock introduced the first horn/strobe notification appliances with its 700x series. The majority of visual signals throughout the 1970s and 1980s were white or red incandescent lights. In the 1980s, most new installations began to include visual signals, and more strobes started to appear. In the United States, the 1990 Americans with Disabilities Act (ADA) triggered changes in evacuation signaling methods to include the hearing impaired. Audible notification appliances would now have to include strobe lights to alert the hearing impaired.[citation needed] This made incandescent lights inadequate for the purposes of the ADA. Many existing installations that did not include visual signals were retrofitted with strobe plates. These retrofit plates would allow for the easy installation of a strobe without replacing the audible signal. The 1996 ADA also required that the strobe to be at least 15 candelas and have a flash rate of at least 60 flashes a minute.[citation needed] Companies such as Wheelock and Simplex discontinued their translucent strobes, and replaced them with new, clear, high-intensity strobes. Today, strobe synchronization is often used to synchronize all strobes in a uniform flash pattern. This is to prevent individuals with photosensitive epilepsy from potentially experiencing seizures due to unsynchronized strobes.

Voice evacuation systems (also called Voice Alarm Systems) have become popular in most countries. Voice evacuation alarms typically are not as loud as horns or bells (although generally standards require the same minimum sound pressure levels), and usually sound an alarm tone (typically a slow whoop, code-3, or chime tone, although this depends on the country and particular application) and a voice message warning that an emergency has been reported and to evacuate the building (often also directing occupants to not use elevators). Voice evacuation systems can also be used by personnel to give specific live information and/or instructions over the alarm system, which provides a distinct advantage over horns or bells. The system can be stand alone (i.e. using dedicated loudspeakers, which can also feature integrated strobe lights), or the system can accommodate public address system functionality. In 1973, the Autocall fire alarm company manufactured the first voice evacuation system [2] . However, voice evacuation systems were not widely used until the 1980's. Today, most high-end fire alarm control panels feature voice evacuation functionality as an available option.

In Europe, voice evacuation systems are normally a mandatory requirement for rail and air transport terminals, high-rise buildings, schools, hospitals, and other large facilities[citation needed]. Voice systems for emergency use date back at least as far as the second world war. Following the lead of companies like Avalon, Tannoy and Millbank Electronics etc., in the 1980s many other companies such as ASL, Application Solutions (Safety and Security) Ltd began producing voice-evacuation systems. In the 1990s, voice evacuation started to become the standard for large facilities, and is still growing in popularity. The use, design, operation and installation of Voice evacuation systems is governed in Europe by CENELEC European Committee for Electrotechnical Standardization EN 60849 and in the UK by the British Standard BS 5839-Part 8, a system code of practice. This is joined by the European harmonised equipment standards family EN 54, and ISO 7240-16:2007.

Initial research into the effectiveness of the various alerting methods is sparse. From 2005 to 2007, research sponsored by the NFPA focused on understanding the cause of a higher number of deaths seen in high risk groups such as the elderly, those with hearing loss, and those who are intoxicated. [3] Research findings suggest that a low frequency (520 Hz) square wave output is significantly more effective in the high risk individuals at awakening.[3] More recent research suggests that strobe lights are not effective at waking sleeping adults with hearing loss and suggest that a different alarm tone is much more effective. Individuals in the hearing loss community are seeking changes to improved awakening methods.[citation needed]