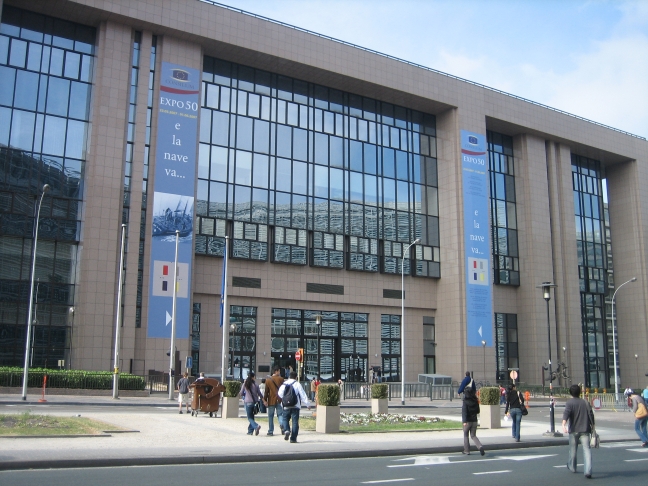 The Justus Lipsius building has been the headquarters of the since . Located in (B) on the Rue de la Loi/ it is in the heart of the EU district, opposite the Berlaymont, the headquarters of the . Further south within the district are the European Parliament Buildings at . Unlike its fellow partner in legislature, the , visiting is restricted though meetings are now broadcast on the internet.

Like most buildings in the EU district its architecture is very modern, with all the European political institutions located in this district it has been described as the "de facto" capital of the .

The building is named after , a Flemish and humanist, after the new building demolished the street that was named after him. The previous Council Building was named , as a major figure in European history.

In 1985, in response to an initiative by the Belgian Government, the Council took the decision to have a new building built, better suited to its needs, and to make the Belgian State's Regie der Gebouwen/Régie des Bâtiments the contracting authority. The foundation stone of the new building was laid in 1989 on land given by the host State, a site formerly crossed by the rue Juste Lipse/Justus Lipsiusstraat, which linked the rue de la Loi/ to the rue Belliardstraat. The official inauguration took place on , under French Presidency.

Many architects, engineers and firms from several Member States of the European Union participated in that large-scale operation. The result was the "Justus Lipsius" building of the Council. It has a total surface of 215,000 m2 (with 24km of corridors.), divided into three distinct but closely linked parts: the Conference Centre, the Secretariat and the substructure.