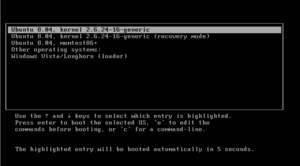 GRUB, with entries for Ubuntu and Windows Vista, an example of dual booting

Multi-booting is useful in many situations such as those where several pieces of software require different operating systems and cannot be run on a single system. A multi-boot configuration will allow a user to use all of this software on one computer. Another reason for setting up a multi-boot system can be to investigate or test a new operating system without switching completely. Multi-booting allows one to get to know the new system, configure all applications needed, and migrate data before making the final step and removing the old operating system. This is often accomplished by using a boot loader such as NTLDR, LILO, or GRUB which can boot more than one operating system.

Multi-booting can also aid software developers where multiple operating systems are required for development or testing purposes. Having these systems on one machine can greatly reduce hardware costs. However, hardware costs are counterbalanced by system management costs, and the costs of the unavailability of the software that cannot be run at any given moment.

An alternative to multi-booting is to use virtual machine software to emulate another computer from within the operating system of choice.

An example of a computer with one operating system per storage device is a dual-booting computer that stores Windows on one disk drive and Linux on another disk drive. In this case a multi-booting boot loader is not strictly necessary because the user can choose to enter BIOS configuration immediately after power-up and make the desired drive first in the boot-order list. However, it is more convenient to have a multi-booting boot loader on one of the drives, set BIOS once to always start booting from (i.e., load the boot loader from) that drive, and then allow the user to choose an operating system from that boot loader's menu. No special disk partitioning is necessary when each operating system has its own dedicated disk drive.

An example of a computer with multiple operating systems per storage device is a dual-booting computer that stores both Windows and Linux on the same disk drive. In this case a multi-booting boot loader is necessary. Also, the disk must be partitioned to give each operating system its own partition of the disk drive.

The basic concept involves partitioning a disk to accommodate each planned installation, optionally including separate partitions for data storage or backups.

Note that Vista's partitioners may not be compatible with XP/2000 (see Logical disk manager#Compatibility problems). If you use Windows 2000/XP, probably the safest approach (for disks under 2 TiB) is to use a CHS partition table alignment that is chosen by Windows XP/2000 (not Vista or Windows 7). If starting with a disk with nothing important on it, delete all partitions, unplug the disk or reboot, create at least one partition with Windows XP/2000 Disk Management or the XP/2000 installer, and format all FAT partitions (only so that Ranish Partition Manager will not show them in red). The alignment can be checked with Ranish Partition Manager: All partitions (including EBR extended partitions—type 05) should start at the beginning of a head, and end at the end of a cylinder. If nothing is shown in red (with error messages when you highlight them) you probably have a disk with a standard CHS partition table alignment. If you wish to edit the partition table with Linux, first run sfdisk with "--show-geometry" and "--show-pt-geometry"[1]. If these return the same geometry, it should be safe to use Gparted, so long as it is set to round to cylinders, and you only add partitions to the end of the partition table. If you add a partition to the middle of the extended partition table, Gparted will not put them in the order they are on the disk (so that hda7 will follow hda9 instead of hda6). The order can be fixed with a Linux fdisk advanced function. Most Linux partitioners that don't use parted, may not end EBR extended partitions (type 05) on the same sector as their logical drives. When Gparted or parted edit these "nonstandard" partition tables, they will "fix" all these EBRs, so that the extended partitions end on the same sector as their logical drives. Ranish PM then shows these partitions as having no "errors". This can also be checked using (for example) sfdisk -l -x -us /dev/hda [2].

One popular multi-boot configuration is to dual-boot GNU/Linux and Windows operating systems, each contained within its own partition. Windows does not facilitate or support multi-boot systems, other than allowing for partition-specific installations, and no choice of boot loader is offered. However, most current Linux installers accommodate dual-booting (although some knowledge of partitions is desirable).

There are some advantages to installing a Linux boot manager/loader (usually GRUB) as the primary bootloader pointed to by the master boot record. All Windows installations will be found by Linux bootloaders, but Windows boot managers do not recognize Linux installations (nor does Windows deal natively with Linux file systems). However, in Vista, in order to install services packs (or other Windows updates) it may be necessary to restore the Vista boot loader first. SP2 may fail to install if it does not find certain files from the Vista boot loader, in the MBR. Similar problems may occur with SP1 [3] or when there are cloned disks or partitions [4]. The MBR boot code can be backed up and restored with dd (unix), available on System Rescue CD.

Further difficulties can arise when installing Windows, when Windows is already installed on another visible partition (as opposed to a partition that is on the disk but deleted from the partition table). Other (bootable) partitions (such as a recovery partition) may have similar problems with the Windows XP installer[citation needed].

System partitions that depend on other partitions

If installing Windows XP/2000 when a Windows XP/2000 system is already installed on another partition, the installer may configure the boot loader (NTLDR) on the older installation, to boot both the newer installation and the old installation, and not install another NTLDR on the partition of the new installation. (See system and boot partitions.) This can create problems as the new partition will be dependent on the old partition, and will not be able to boot unless both partitions are properly configured. For example, if the partition with the old system is deleted, the new system can not be booted by activating it, or using another boot loader (such as GRUB or XOSL) because Windows 2000/XP requires NTLDR to boot. It may also name the system partition of the second installation, some letter other than "C:" (usually "D:"). It is not desirable to have a system partition named "D:" because if the disk signature is changed, this may cause the system drive to be renamed as "C:", and fixing this may require editing the registry of a non-bootable system (not an easy task).

To make the Windows installer put NTLDR on the partition of the system being installed, and to make this system name its partition C:, it may be necessary to hide other partitions. It is safest to hide certain other (bootable) partitions (such as a Dell recovery partition) because these might cause similar problems with a Windows XP installer[citation needed]. These partitions must be hidden before attempting the second Windows installation. It is safest to leave these partitions hidden until after the new installation is booted for the first time, so that it will give its partition the letter "C:". The hiding can be done with MBRWizard[citation needed] or the partition(s) can be deleted from the partition table (and later recreated) with a sector-precise partitioner such as Ranish Partition Manager [5].

However, using this method will not automatically set up a dual-boot configuration. In order to boot the initial Windows installation you must either, activate that partition, configure boot.ini of the new system to dual-boot the old system, or install a third party boot loader such as GRUB or XOSL.

Boot Camp allows owners of Intel-based Apple Macintosh computers to install Windows XP, Vista and Windows 7 on their Macs. The software comes bundled with Mac OS X 10.5 Leopard, 10.6 Snow Leopard and Mac OS X 10.7 Lion, Apple's latest version of the Operating System included on their computers. Previously the application was available in beta version as a download from Apple's website.

Boot Camp allows non-destructive disk partitioning and resizing of HFS+ filesystems, boot menu options, and an option to burn a CD with necessary device drivers. Since Windows XP is incompatible with Extensible Firmware Interface (the successor to legacy BIOS), the firmware on early Intel Macs need to be updated to support BIOS emulation first. BIOS emulation is achieved with a compatibility support module (CSM). Apple does not support non-Windows partition formats or drivers so therefore configuring other operating systems is not directly possible through Boot Camp itself. However, any operating system which can utilize the BIOS emulation of Intel Macintosh can be made to work, including non-XP versions of Windows. The Ubuntu Linux distribution is particularly popular for this purpose because they provide an option to use proprietary device drivers along with open source drivers.