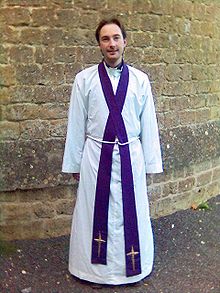 An Anglican priest wearing a white girdle around his waist to hold his alb and stole in place.

The cincture is a liturgical vestment, worn encircling the body around or above the waist. The term has two distinct meanings, the usage generally dividing along denominational lines. Where the context does not indicate which meaning is intended, ambiguity may be avoided by the use of the terms "girdle" and "fascia".

In the Roman Catholic Church, the cincture is a long, rope-like cord with tassled or knotted ends, tied around the waist outside the alb. The colour may be white, or may vary according to the colour of the liturgical season. A bishop's cincture is made of intertwining gold and green threads, a cardinal's has red and gold, and the pope's with white and gold.

When the cincture is tied in the front and the ends draped on either side, it is called a Roman Knot. Besides its functional role in securing the alb and stole, the cincture bears a symbolic role, signifying chastity and purity.

The same vestment is widely used in the Anglican, Methodist and Lutheran churches, as well as some other Protestant churches. However, in these denominations it is usually referred to as a girdle, the term "cincture" being used instead to signify a broad sash worn over the cassock somewhat above the waist. This latter vestment is in the Roman Catholic Church known as a fascia, and the use of this vestment is restricted to ordained clergy and seminarians.