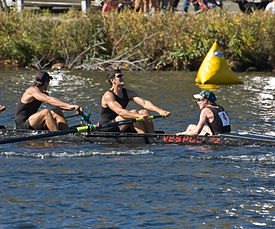 A coxswain (far right), 8th and 7th position rowers at the Head of the Charles Regatta. 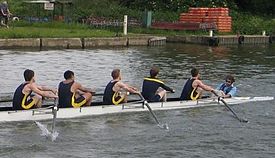 In a crew, the coxswain (or simply the cox) is the member who sits in the stern (except in bowloaders) facing the bow, steers the boat, and coordinates the power and rhythm of the rowers.

The role of a coxswain within a crew is to:

The coxswain, also called the cox, is in charge of the crew and gives all the commands. He/she is responsible for crew safety, which must be the prime concern. Along with steering, his/her role is to coach the crew. The cox acts as the coach's assistant, but in the absence of a coach, as is the case in a race, he/she is the coach. Being in the boat, the cox has a feel for what the crew need and a good view of technical errors. The cox needs to translate the coach's concerns into practical calls. The cox must be able to diagnose problems such as balance and coach the crew into appropriate corrective action. At the start of an outing the cox must be able to take the crew through a technical and physical warm-up so that the coach is presented with a crew which is able to start the training program and has recapped any points that the coach has been emphasising in previous outings. It is essential that the coach and the cox work in good harmony and show respect to each other all the time. It's essential that the cox is briefed on what the coach wants to achieve in the outing from the point of view of building physical fitness, technical skill and team spirit. A cox must be positive, a good motivator and very encouraging. Whilst errors must be spotted and corrected, it is also important to catch someone getting it right where they have been struggling.

The above detail was even more greatly required by the Coxswain of a Lifeboat, as was necessary in the 19th centuries when ships would flounder in the channels approaching their ports of call. One Richard Cox of Burnham in Somerset, England was one such (appropriately named) who was the first Coxswain of the Lifeboat "Cheltenham", presented to Burnham by the citizens of Cheltenham, Gloucesterhire, England.

Steering a rowing boat is surprisingly difficult; boats are designed for speed, not maneuverability. Coxswains may steer with either the tiller (a cable connected to the rudder), commands for increased "pressure" or strength from rowers on one side of the boat, or both. A variety of steering techniques may be used, depending on the situation. In the most extreme cases, the coxswain may go "full tiller", turning the rudder to its maximum angle, and may even enlist the rowers to help the boat turn even faster. This technique is usually reserved for only the sharpest turns, as the sharp angle of the rudder increases drag and upsets the balance of the boat. For more conventional turns, the coxswain may move the tiller slightly to one side or the other over the course of a few strokes. To minimize disturbance of the boat's stability, the motion of the tiller must be smooth and not sudden. The coxswain may also initiate the turn during the drive phase of the stroke, when the propulsive force of the oar blades in the water helps stabilize the boat. For very small steering adjustments, the coxswain may move the tiller very subtly during the recovery phase of a single stroke. This technique is most effective at higher speeds and on straight courses, and must be used discreetly since motion of the tiller during the recovery can easily disturb the boat's balance.

Some coxswains advocate that the rudder should be applied only during the drive phase (and centered during the recovery phase), citing the fact that the boat is most stable when the oars are in the water and least stable when the oars are out of the water. The technique that often accompanies this view involves repeatedly moving the rudder back and forth over several strokes, making sure that the rudder is centered before every recovery. However, the rudder has much less steering power during the drive phase because of the very large forward propulsion force it must overcome. As a result, this technique often causes more boat drag due to longer rudder use, and the back-and-forth motion of the rudder tends to rock the boat.

The cox will also need to take into account the stream and the wind as well as the river. As a general rule, still waters do not run deep: rather the stream is strongest where the river is deepest. This explains why in the (Oxford and Cambridge) Boat Race coxes tend to steer in the centre of the river. Competitive steering is best done by the cox steering their best course and leaving the other cox to make mistakes.

A boat without a cox is known as a coxless or "straight" boat. Besides the obvious single and double, straight pairs and fours are the most common coxless boats at regattas in the US. Because of their speed and lack of maneuverability, eights without a cox are very rare and dangerous.

Coxswains are traditionally thrown into the water after a regatta win.

It is considered advantageous for the cox to be light - as there is less weight for the crew to move. However, weight is generally considered of minor importance compared to steering, coaching, and motivational ability. Nevertheless, most competitive coxswains weigh in at under 120 pounds, and often much less.

The FISA (International Rowing Federation) minimum weight for men's crew coxswains is: 55 kilograms (121.25 pounds) in racing uniform. For Women's and Mixed Crews, the weight minimum is 50 kilograms (110.23 pounds) in racing uniform. If a cox is underweight they are required to carry weights to bring them above their minimum, primarily sandbags which may not exceed 10 kg.

In the United States, junior women's crew coxswains are required to weigh 110 lb. If not, they must carry sandbags to bring them up to that weight. Junior coxswains for men's crews must weigh a minimum of 120 lb.

Coxes in either coxed pairs, fours, quads, eights, or octuples can use a cox box, most models of which show the rate in strokes per minute of the person sitting in the stroke seat (the seat at the rear of the boat, from whom the rate of strokes per minute and timing is taken).

Additional features include: - a stopwatch started automatically at the first full stroke - stroke ratings over time - GPS speed measurement - Ratio of the power phase to recovery (speed of oars through the water versus returning out of the water for the next stroke) - 500 meter split times - Stroke count - Alarm clock - so you know if you are late for your race - Metronome for stroke rates

However the primary function of a cox box is to amplify the coxswain's voice, using a microphone connected to loudspeakers in the boat. This means that the cox needs only to speak for all rowers to hear their voice.

Historically the cox would have carried (or strapped to his head) a conical, unpowered megaphone to amplify their voice. One design of cox box is made by Nielsen-Kellerman and others include Coxmate.