For the Man Who Has Everything

For the Man Who Has Everything 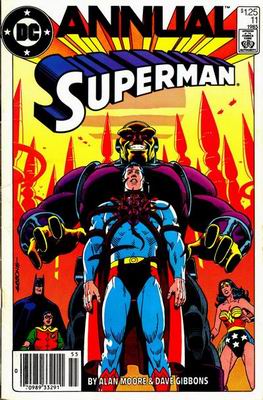 writers =
artists =
pencillers=
inkers=
letterers= Dave Gibbons
colorists = Tom Ziuko
TPB= DC Universe: The Stories of Alan Moore
ISBN=1401209270
cat=Superman
sortkey=PAGENAME
nonUS="For the Man Who Has Everything" is a story by and , first published in "Superman Annual" #11 (1985) and later adapted into a "Justice League Unlimited" episode in 2004.

, Robin, and visit the on 's birthday, only to find him in a vegetative state, a large alien plant stuck to his chest, its tendrils wrapped around his body. As they analyze the situation, the alien steps into the scene, revealing the name of the plant (the "Black Mercy") and how it has put Superman into a coma, feeding him an extremely realistic and plausible dream based on his "heart's desire". As he explains, Mongul touches the Mercy while wearing a pair of protective, oversized gauntlets. Interspersed with the scenes in the Fortress are pages of Superman's dream of living a normal life on his long-destroyed home planet of Krypton, happily married with two children.

While Wonder Woman battles Mongul, whose power is shown to exceed hers, Batman and Robin try to free Superman. Superman's fantasy, meantime, takes a dark turn. His father 's prediction of Krypton's doom was unfulfilled in the fantasy, leading to Jor-El being discredited and embittered. The Kryptonian society within the dream is undergoing political upheaval, with Jor-El becoming chairman of an extremist reactionary movement called the "Sword of Rao" which calls for a return to Krypton's "noble and unspoiled" past. A major point of contention in the political struggle is the use of the , Krypton's other-dimensional prison system, developed by Jor-El and thus making the House of El unpopular. Kal-El's cousin, Kara Zor-El, is brutally assaulted by anti-Zone protesters, who use the criminal as martyr and symbol.

Superman gradually begins to wake up from the increasingly disturbing dream, with it finally dissolving with a scene of his "son", Van-El, slipping away from him. In combination, Batman has resorted to trying to pry the Mercy off Superman's chest. Without protective clothing, the plant immediately attacks "him", submerging Batman into his own "heart's desire" dream, in which the murder of his parents is foiled and he instead grows into a contented adulthood with a wife () and daughter. Superman, infuriated by both the Mercy's attack and the loss of the fantasy (as Mongul later describes, "escaping it must have been like tearing off your own arm"), savagely attacks Mongul, who was about to finish off the defeated Wonder Woman. The two adversaries battle across the Fortress, causing massive damage to it.

Robin, anxiously seeking a solution, puts on Mongul's discarded gauntlets and pries the Mercy off of Batman. Thinking quickly, he stuffs the Mercy into one of the gauntlets, allowing him to safely carry it to the battle. Superman, on the verge of delivering a crushing blow to Mongul, becomes distracted by the sight of the statues of his parents, allowing Mongul to deliver a stunning counterattack. Mongul is on the verge of killing Superman when Robin drops the Mercy on him. Mongul is instantly seized by the plant and submerged into his own deepest fantasy, in which he swats the Mercy aside, kills Robin and then Superman, then conquers the universe.

As in such other Moore/Gibbons projects as "", "For the Man Who Has Everything" is rich in detail, showcasing many of the minor elements drawn from Kryptonian history , including:
*Page 1
**Frame 1: poster at extreme left. Jax-Ur was a scientist who destroyed Krypton's smaller moon (as well as some 500 colonists) with a prototype pseudo-nuclear warhead ("Action Comics" #284, Jan 1962) and was banished to the , Krypton's other-dimensional prison system. These posters appear throughout the story, as well as protesters who want the Zone system abolished.
**Frame 3: Reference to " Crater". Kandor, the former capital of Krypton, was shrunk and stolen by the android Brainiac ("Action Comics" #242, Jul 1958). The bottle city of Kandor was restored to full size by Superman in "Superman" #338 (Aug 1979). He soon after built a perfect replica but was surprised when thousands of tiny aliens, fleeing the destruction of their home planet, moved into it ("Superman" #371, Aug 1982). Late in "For the Man Who Has Everything" when Wonder Woman, not knowing Superman already has a replica, gives him a second one, he hides his at super-speed to spare her feelings.
**Frame 4: Lyla Ler-Rol was a Kryptonian actress who Superman (accidentally thrown backward in time and landing on Krypton before the planet's destruction) met and fell in love with in "Superman" #141 (Nov 1960). This frame also contains a and reference. These were a and Robin-like pair of crimefighters in the bottled city of Kandor, originally with the "secret identities" of Superman and (Superman had no powers when in Kandor), first appearing in "Superman" #158 (Jan 1963). Later, the roles were filled by two Kandorians. In this fantasy, they are characters on a popular children's entertainment series. There is also a reference to the "Scarlet Jungle", an untamed region on Krypton noted for red foliage and wild beasts ("Action Comics" #310, Mar 1964).
**Frame 5: Allura and Kara Zor-El (), Kal-El's aunt and cousin, appear as well as a white dog, possibly or a descendant ("Superboy" #126 (Jan 1966) described the El family tradition of keeping white dogs).
**Frame 6: Kara gives Kal a headband. Men in Kryptonian society typically wore headbands as marks of citizenship, i.e. after passing the age of 12 and achieving a certain level of education and/or social development ("Superman" #352, Oct 1980). In this fantasy, it seems to have fallen out of fashion since relatively few men are seen wearing headbands, including Kal-El himself. The Metal-Eater is a Kryptonian animal resembling a small (though in its original appearance in "Action Comics" #242, it was portrayed as a giant mole). Note also that Kal-El evidently wears a -ish pair of eyeglasses
*Page 6
**Frame 4; Reference to (the late) , Jor-El's brother, uncle of Kal-El, husband of Allura and father of Kara Zor-El.
*Page 7
**Frame 6: reference to "Rao", the Kryptonian sun-god. Jor-El wears a green tunic with a sunburst emblem, which is how he has almost always been portrayed (see the statue on page 33, frame 5).
*Page 8
**Frame 2: Reference to Erkol, an ancient Kryptonian city (referenced in "Superman" #282, Dec 1974, among other places). Also, reference to "racial trouble with the immigrants." Vathlo was an Kryptonian island with a dark-skinned population ("Superman" #239, Jun-Jul 1971)
**Frame 4: Reference to the Science Council, the senior-most ruling body on Krypton. In various accounts of Krypton's final days (including "Superman" #61, Dec 1949), it is the body Jor-El fails to convince of the planet's impending doom.
**Frame 6: Phantom Zone reference. The technology to put people in the Zone was developed by Jor-El himself ("World of Krypton" volume 1, issue #2, Aug 1979). This discovery originally earned him membership on the Science Council, but in this fantasy is making the house of El politically unpopular.
*Page 21
**Frame 4: "Gold Volcano" reference. Gold was commonplace on Krypton ("World of Krypton" limited series, volume 1) and had never been used as currency. The final page, detailing Mongul's universal conquest fantasy, includes appearances by numerous extraterrestrial DC characters including and ; Brainiac; ; (empress of ); Bolphunga the Unrelenting (from a story in "" #188, May 1985, also by Moore and Gibbons); an Oan Guardian; J'onn J'onnz (); and a bearded long-haired human representing Alan Moore himself bowing, among others. The fantasy also incorporates "a resurrected ", a copy of the planet-sized battle station used by Mongul but destroyed by Superman and Supergirl in "" #28 (Dec 1980).

"" featured two references to "For The Man Who Has Everything". In "Infinite Crisis" #1, a panel showing Mongul Jr. confronting Batman and Wonder Woman at the remains of the Watchtower uses the same composition as Mongul's entrance in the earlier story. Later, in a tie-in story in "", Mongul Jr. uses a Black Mercy to capture Green Lantern (Hal Jordan) and (Oliver Queen). Queen is able to break free because Jordan's greater willpower allows his desires to override the fantasy to describe what he thinks Queen's perfect life would be, rather than what Queen himself would wish for.

Since then, the Black Mercy has been given an origin tale in the "" title and Mother Mercy (which birthed the Black Mercy) is now a Green Lantern of Sector 2261.

In an Elseworld's miniseries a mysterious figure named Khouriga Edjem has turned a fictional Middle Eastern country Kamburu into a modern day Eden. It is revealed through the course of the miniseries that Edjem is in fact Mongul who has come to Earth to conquer it. He used a Black Mercy on Green Lantern Guy Gardner to incapacitate him and use him as a power source for the entire country of Kamburu.

The story was adapted for the second episode of the animated series "". In this version, Robin does not appear and most of his lines are given to Wonder Woman. The Lyla character is renamed "Loana" and is an amalgam of both and , the two main loves of Clark Kent's life. Loana is voiced by , who provided the voice of Lois Lane in the earlier series, "", as well as throughout "Justice League Unlimited".

adapted the script from the Alan Moore/Dave Gibbons story; they are given credit at the beginning of the episode. DeMatteis: "I don't think he'd be happier on Krypton. It's just that Superman never really knew Krypton and had a profound longing to experience that part of his history. Krypton is part of him but Earth, I think, is a bigger part."Fact|date=December 2007

This issue's story was nominated for the 1986 Jack for Best Single Issue.