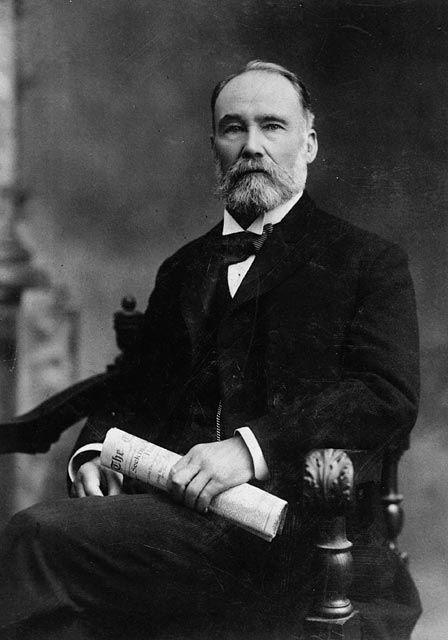 Born near Nairn, in Middlesex County, , he worked as a school teacher and school inspector before going into politics. He was first elected to the as a Liberal in the 1872 election. He was re-elected in the 1874 and 1878 elections. He was initially declared re-elected again in the 1882 election, but his victory was challenged, and the next year the vote was declared void.

Rather than run again, Ross moved to provincial politics when he was offered the position of Minister of Education for Ontario in the Liberal government of Sir in 1883. He oversaw the construction of over 300 libraries, the expansion of the system, and the creation of the for the training of school inspectors and masters. Ross increased grants to the education system, and oversaw the expansion of the system and the federation of a number of smaller colleges with the .

The Conservative opposition protested against the possibility of increased support for the system, while the Catholic minority agitated for the same high schools and other facilities that the public (Protestant) school system enjoyed. The was formed by in the 1890s to oppose the expansion of Catholic rights, and to attempt to exclude Catholics from public life in the province.

After Mowat's retirement as , and a short interregnum by Arthur S. Hardy, Ross became Premier (and Provincial Treasurer) on , . The Liberal government was tired, however, after almost thirty years in office, and Ross could do little to revive its fortunes. In the provincial election of 1902, the Liberal majority was cut to five seats, but at a time when parties lacked the discipline over their members they would later develop, five seats was not enough for a secure government. A vote-buying scandal based on allegations brought forward by engulfed the government, and demands for split the party. Leading a stagnating and drifting government, Ross called an election for , , in which the Liberals lost twenty-two seats and the Conservatives under won sixty-nine, making Whitney the new Premier.

Ross remained Liberal leader until 1907, when he was appointed to the . He wrote two books about his life in politics, and died in 1914.