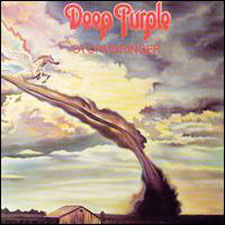 
"Stormbringer" is the ninth studio album by , released in November 1974. On this album, the soul and funk elements that were only hinted at on "Burn" are much more prominent. This shift in direction was not supported by , who departed the band not long after "Stormbringer" was released.Fact|date=April 2008

This record, which had been out of print in the US for over 20 years, has been the object of much renewed interest: Friday Music label released it stateside on July 31, 2007 (along with and ). It is unclear which tapes were used as a source for this release, but the label's website claims that the album has been digitally remastered (but not expanded).

Additionally EMI (Deep Purple's label for much of the world outside the US) has worked with Glenn Hughes on a remastered, expanded version of the album (much like the one done with "Burn") which includes bonus alternate takes/mixes. Originally due on fall 2007, it is now being prepared for release now scheduled on January 19 2009 for the European/international market only. The release has been expanded into a limited edition 2 CD set: the first being the remastered and expanded release previously announced and a second CD consisting of a mix, which was originally released in the USA in 1975. Once this 2 CD edition is sold out, a single CD edition will follow it. A limited vinyl edition has also been planned.

The name "Stormbringer" comes from the fantasy works of . In Moorcock's novels, is an evil magical sword that drains the souls of all the people it kills. According to Moorcock, the members of Deep Purple were familiar with his work before they chose that name, but were under the misimpression that the name "Stormbringer" was from ancient mythology, when in fact it was invented by Moorcock. [See 's post on the "Moorcock's Miscellany" forum: [http://www.multiverse.org/fora/showthread.php?t=330#post4810] .]

Before the start of the first verse of "Stormbringer", there is a message, saying "The cocksucker, motherfucker stormbringer" quietly, which when played normally is inaudible.

*Recorded at , in August and mixed at , during September 1974
* Engineered by ; assisted by Mack and Hans
* Mixed by Martin Birch and Ian Paice; assisted by Gary Webb and Garry Ladinsky
* Produced by Deep Purple and Martin Birch