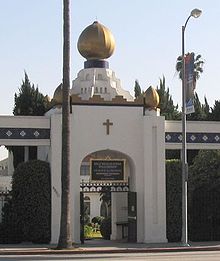 Self-Realization Fellowship / Yogoda Satsanga Society of India is a worldwide spiritual organization founded by Paramahansa Yogananda in 1920[1] and based in Mount Washington[2] in Los Angeles, California.[3]

The group carries on Paramahansa Yogananda's teachings, including Kriya Yoga, a form of yoga the group claims originated millennia ago in India. To this end, it conducts home-study lessons; publishes Yogananda's writings, lectures, and recorded talks; oversees temples, retreats, meditation centers, and monastic communities bearing the name Self-Realization Order; and coordinates the Worldwide Prayer Circle, which it describes as a network of groups and individuals who pray for those in need of physical, mental, or spiritual aid, and who also pray for world peace and harmony.[4]

The group has several temples in other cities in California and in Phoenix, Arizona and maintains other facilities throughout the United States and around the world (there are 500 meditation centers, located in 54 countries). SRF also has a sister organization in India called Yogoda Satsanga Society of India, founded by Yogananda in 1917, and headquartered in Dakshineswar (near Calcutta). Yogoda Satsanga Society oversees 90 meditation centers, 21 educational institutions, and a variety of charitable facilities.[5] [6][7]

The group states its mission is to foster a spirit of greater understanding and goodwill among the diverse people and nations of the global family and help those of all cultures and creeds to realize and express more fully in their lives the beauty, nobility, and divinity of the human spirit, which mission it intends to fulfill through worldwide service.[4] [8]

Sri Daya Mata was head and President of Self Realization Fellowship from 1955 to 2010, after succeeding the previous president, Rajarsi Janakananda.[9] In the accompanied material to one of their books, SRF states:

Central to Paramahansa Yogananda's teachings, which embody a complete philosophy and way of life, are scientific techniques of concentration and meditation that lead to the direct personal experience of God. These yoga methods quiet body and mind, and make it possible to withdraw one's energy and attention from the usual turbulence of thoughts, emotions, and sensory perceptions. In the clarity of that inner stillness, one comes to experience a deepening interior peace and awareness of God's presence.[10]

On January 9, 2011, Self-Realization Fellowship announced Mrinalini Mata, as its new President. She is "one of the close disciples of Paramahansa Yogananda personally chosen and trained by him to help guide his society after his passing," and had held the position of vice-president since 1966.[11]

Paramahansa Yogananda took up residence in Encinitas, California in the later years of his life.[12] A hermitage and temple were built there. It was at the SRF Encinitas hermitage that Yogananda wrote his famous Autobiography of a Yogi.