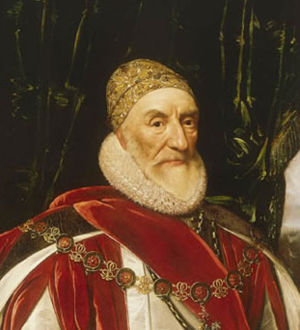 Earl of Effingham, in the County of Surrey, is a title in the Peerage of the United Kingdom. It was created in 1837 for Kenneth Alexander Howard, 11th Baron Howard of Effingham. This branch of the Howard family descends from the noted naval commander and politician Lord William Howard, eldest son of Thomas Howard, 2nd Duke of Norfolk, from his second marriage to Agnes Tylney. He served as Lord High Admiral, as Lord Chamberlain of the Household and as Lord Privy Seal. In 1554 he was created Baron Howard of Effingham in the Peerage of England as a reward for leading the defence of London against Wyatt's rebellion. He was succeeded by his eldest son, the second Baron, better known to history as Charles Howard, 1st Earl of Nottingham, after being granted the latter title in 1596. He was Lord High Admiral from 1585 to 1618 and served as commander-in-chief of the English fleet against the Spanish Armada in 1588. In 1603 his eldest son and heir apparent William Howard, Lord Howard of Effingham (1577–1615), was summoned to the House of Lords through a writ of acceleration in his father's junior title of Baron Howard of Effingham. He predeceased his father but is not considered to have succeeded as third Baron Howard of Effingham.

The Earl of Nottingham was succeeded by his younger son, the second Earl. He represented Bletchingley, Surrey and Sussex in the House of Commons and served as Lord-Lieutenant of Surrey. He was childless and was succeeded by his half-brother, the third Earl. On his death in 1681 the earldom became extinct. The late Earl was succeeded in the barony by his first cousin twice removed, the fifth Baron. He was the great-grandson of Sir William Howard (d. 1600), younger son of the first Baron. Lord Howard of Effingham notably served as Governor of Virginia from 1683 to 1692.

Another member of this branch of the Howard family was Field Marshal Sir George Howard. He was the son of the aforementioned Lieutenant-General Thomas Howard (d. 1758) and the brother of Henry Howard, father of Kenneth Alexander Howard, 1st Earl of Effingham.