Michael Holt is a fictional character, a comic book superhero appearing in publications by DC Comics. First appearing in Spectre (vol. 3) #54 (June 1997), he is the second character to take up the Mister Terrific mantle.

At a young age, Michael Holt showed remarkable intelligence, reading and assimilating the works of Bohr, Einstein, Planck and Feynman, the pantheon of theoretical physics, at the age of six. He studied advanced science, space, and time "while other children struggled through Sesame Street".[1] Michael grew up with his mentally challenged older brother, Jeffrey, whom Michael loved dearly. When Jeffrey died at the age of 15, Michael was devastated.[2]

Holt displayed "a natural aptitude for having natural aptitudes", as he called it, easily picking up and retaining complex skills and abilities that other men spent their entire lives perfecting. Before he began his career as a superhero, he already possessed 14 Ph.D's (two in engineering and physics -- including doctorates and masters degrees in law, psychology, chemistry, political science, and mathematics),[3][4] was a self-made multi-millionaire[1] with a high tech firm called Cyberwear (subsequently sold to Waynetech[5]) and was a gold medal winning Olympic decathlete.

The accidental deaths of his wife and unborn child were a devastating blow to Holt and while contemplating suicide, he was met by the Spectre, who told him about Terry Sloane, the Golden Age superhero known as Mister Terrific. Inspired by Sloane's life story, he took the name Mister Terrific and later joined the current Justice Society of America, eventually serving as its chairman.

He initially wore ordinary clothes and a leather jacket with Sloane's "Fair Play" emblem on the back. He then wears a T-shaped mask composed of electronic nanites, a black and white costume with red trim, and a collarless jacket in the same colors (the black sections of tunic and jacket forming a "T") with "Fair Play" written on the sleeves and "Terrific" across the back.

For a time he acted as spokesperson for Tylerco and consulted that company on industrial espionage and security matters in exchange for that company helping fund a youth center Terrific had started.[6]

Holt has a friendly rivalry with Batman, his opposite number in the Justice League of America (in his identity as Bruce Wayne, Batman owns Holt's business). Michael Holt has encountered Terry Sloane twice through time travel, with Sloane expressing pride in having so worthy a successor. Holt has been noted as the most intelligent member of the JSA in its history, surpassing his predecessor. He is also known as the third smartest person in the world,[7] and this notion now appears to be widespread within the DC Universe.[8]

During a conflict over leadership of the Justice Society between former chairman Hawkman and then-current chairman Sand, Terrific was elected as the JSA's new chairman by his teammates, despite not actively seeking the office.[9] He served in this capacity until the team disbanded following the Infinite Crisis.

Mr. Terrific currently remains a member of the reformed Justice Society of America. He resumed his chairmanship from the last incarnation of the team,[10] but his leadership responsibilities in Checkmate eventually prompted him to relinquish the position to Power Girl.[11]

Mr. Terrific was part of the team assembled by Batman for an attack on the Brother Eye satellite responsible for controlling the OMACs. He played a critical role as his invisibility to technology allowed him to reach the satellite's propulsion system, sending it crashing to Earth. On this meeting he met and befriended another African American superhero - Black Lightning.

As part of "One Year Later", though Holt is still a member of the JSA, he has also become part of the United Nations Security Council's intelligence agency Checkmate. He initially held the position of White King's Bishop, but when the previous White King (Alan Scott) was forced to resign, he became Checkmate's new White King, complicating his relationship with Sasha Bordeaux, Checkmate's Black Queen. He has also given up his chairman position, which has been taken over by Power Girl. Mr. Terrific has also established an ill-defined mentorship with Firestorm (Jason Rusch), over the missing year. The specifics of their meeting are yet to be documented.

During the Final Crisis of Humanity, the war between Darkseid and the human world, Mister Terrific, along with Cheetah and Snapper Carr, are left trapped in the ruins of Checkmate headquarters, unable to get past the brainwashed metahuman, and caring for Sasha, who preferred using her OMAC programmation to shut down her bodily functions rather than falling prey of the Anti-Life Equation. Forcefully waking up Sasha, thus condemning her, Michael Holt is forced to activate a new OMAC population, programmed to obey him rather than Brother Eye, and protect the last few humans against the new Justifiers.

In Justice Society of America vol. 3 series, Mr. Terrific takes over the research, just as the low-level villain Tapeworm appears on the news, taking hostages and demanding that Wildcat show himself. All-American Kid and King Chimera must remain in the brownstone, Mister Terrific retreats to his lab, and the rest of the team leaves to help Wildcat. All-American Kid goes into the lab and stabs Mister Terrific in the back.[12] Justice Society members arrive back at headquarters to discover Mr. Terrific has been attacked, and Dr. Mid-Nite tends to his wounds.[13] In the end, Mister Terrific succumbs to his injuries and Alan Scott reports that he has died.[14] However, Scott is able to use the power of the Green Flame to slow down time around Mister Terrific's body in the hopes that he can be healed before brain death occurs.[15] Michael is restored to life by the magic of the new Doctor Fate, and attacks All-American Kid, revealing that he is actually the teenage psychopath known as Kid Karnevil, and subdues him.[16] For a short time during his recovery, Michael is forced to use a wheelchair, although he still found time to upgrade Mister America's whip.[17]

In September 2011, Mister Terrific received an ongoing series written by Eric Wallace and drawn by Roger Robinson.[18] Holt began sporting a new costume designed by Cully Hamner.[19] He is also currently in a realtionship with Karen Starr.

While being held captive by Onimar Synn on an adventure with the Justice Society on Thanagar, Holt first expressed his disbelief in souls and how he was uncomfortable with the notion of reincarnation after witnessing the return of teammate Hawkman. Holt states, "when my wife, Paula, was killed in a car accident... she was gone. I didn't feel her 'soul' around me. Didn't feel anything."[20]

After a near-death experience where he sees his wife and unborn child (whom he decides to name 'Terry' after the original Mister Terrific), Holt's atheism is shaken and he agrees to attend a church service with teammate Doctor Mid-Nite.[21]

However, this attempt to find religion apparently wasn't satisfying as Holt is also seen getting into a theological discussion with Ragman during the Infinite Crisis (Ragman is Jewish while Mr. Terrific describes himself as an atheist). When asked if he had faith in anything, Terrific answered, "Sure I do. I've got faith in my team."[7]

An alternate version of Michael Holt appears on the new Earth-2. This version is a college professor, who had a religious experience after his wife was nearly alive, and is now a devout Christian. He helps the Power Girl of New Earth to return home.[37] When Justice Society entering the Earth-2, Professor Holt is confronts his counterpart Michael Holt from New-Earth. Professor Holt introduces the Justice Society to his wife, Paula.[38] 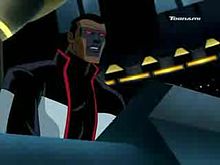 Mr. Terrific on Justice League Unlimited in the episode "Destroyer".