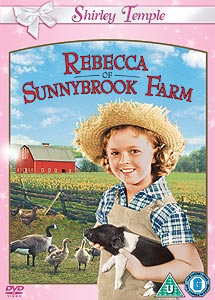 "Rebecca of Sunnybrook Farm" (1938) is a musical starring and in a story about a talented orphan's trials and tribulations after winning a radio audition to represent a breakfast ceral. Directed by , the film is loosely based upon the children's book "" by . The show features two musical highpoints: Temple singing a medley of her hit tunes and a finale in which Temple as a toy soldier dances with Bill "Bojangles" Robinson on a flight of stairs. Dances were choreographed by and .

Rebecca Winstead () wins a radio audition to represent a breakfast cereal but leaves the studio with her shifty stepfather Harry Kipper () believing she has lost the audition. Advertising head Tony Kent () is dismayed when he discovers she has vanished without a trace.

Kipper regards Rebecca as a burden and dumps her on the farm of her Aunt Miranda (). Kent lives next door, recognizes Rebecca, and requests Miranda's permission to feature Rebecca on his radio show. When Aunt Miranda refuses to allow Rebecca to associate with show people, Kent broadcasts secretly from his house with Rebecca joining him on the sly.

Kipper hears Rebecca's broadcast and reappears on the farm looking for easy money. As Rebecca's legal guardian, he forces Aunt Miranda to surrender the child. He takes her away from her friends and loved ones to New York City. There, he signs a contract with Kent's competitor Purvis () to star Rebecca on another radio show. When Rebecca suddenly develops and cannot sing, Purvis angrily voids the contract. Kipper sells his legal guardianship to Aunt Miranda for $5,000. Rebecca reveals to her friends she feigned hoarseness to free herself from Kipper. The film ends with Rebecca and Aunt Miranda's farm hand Aloysius (Bill 'Bojangles' Robinson) costumed as toy soldiers performing a dance on a flight on steps that suggests their similar number in "".

Subplots include a romance between Kent and Rebecca's cousin Gwen (), another between two radio singers ( and ), and the rekindling of an old romance between Aunt Miranda and neighbor Homer Busby (). appears briefly in a showcase bit as a nervous organist at the radio station.

The is an orchestral arrangement of what appears to be the film's unofficial theme tune by virtue of its several reprises, "" by () and (). The tune returns as an abbreviated vocal solo for Rebecca when she auditions at the radio station in the first scene, and returns later as a solo for Rebecca while she picks berries on the farm with Aloysius (Bill "Bojangles" Robinson). In another scene, she sings it over the telephone.

When Rebecca broadcasts from Kent's country home midpoint in the film, she accompanies herself on the piano through a medley that includes "", "", "When I'm with You", "Oh My Goodness", and "Goodnight, My Love" - all Temple hit tunes from previous films. The film ends with Temple and Robinson clad as toy soldiers dancing on a flight of stairs to "" (Scott), and (Mitchell and Pollack).

, contributor to "", commented: "There’s some crude and deceitful behavior by Rebecca's stepfather (portrayed negatively). Rebecca, her grown cousin (Stuart) and Kent also deceive several people. Beating the stepfather at his own game is somewhat justifiable; deceiving Aunt Miranda (just because they disagree with her judgment) is not. There are also a lot of insults thrown around among the adult cast; the non-realistic acting style lessens their impact somewhat. This film and most other Temple films do have objectionable elements if you look closely enough, but they compare favorably to anything coming out of Hollywood today." The film was given a 'moral rating' of Good. [ [http://www.christiananswers.net/spotlight/movies/2001/rebeccaofsunnybrookfarm.html "Christian Spolight on the Movies: Rebecca of Sunnybrook Farm"] ]