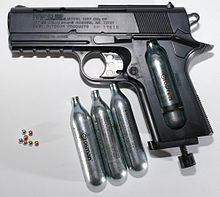 Daisy is a company that makes and sells inexpensive BB guns and other air guns. 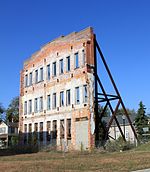 Daisy was started in 1882 as Plymouth Iron Windmill Company in Plymouth, Michigan. In 1886 the company started to give BB guns with purchases of windmills. The gun was so popular the company started to sell guns instead of windmills. The gun received its name when General Manager Lewis Cass Hough fired one and enthusiatically said "It's a Daisy!'[1] In 1958, the company moved the corporate offices and manufacturing facilities from Plymouth to Rogers, Arkansas. The Plymouth factory was demolished in 2005 and replaced with a condominium complex called Daisy Square. One wall of the factory building remains in front of the complex, at least for the time being. The wall has been free-standing since the factory was torn down, and was supposed to be built into an apartment building, but the wall was not included in the completed building, and is still standing. (January, 2008) The Daisy Administration building, on Plymouth Rd, is still standing and has become an office complex and restaurant. After the Daisy Corporation vacated the building the lower floor was converted in to two offices and a restaurant. The restaurant has changed names three times. First it was the Plymouth Landings, then Dunlevy's Bar and Grill and finally Plymouth Crossing. (August 2008)

Daisy is best known for their inexpensive youth BB guns, modeled after lever action rifles. Perhaps the most famous of these is the Red Ryder model, which is still in production today, despite the fact that the Red Ryder comic strip was canceled in 1963. These simple smoothbore, spring-air BB guns fire at low velocities, and are marketed to children ages 10 and over. In addition to the spring air BB guns, Daisy also markets a line of multi-pump pneumatic rifles capable of firing pellets or BBs to the same age group.

Production of the Daisy Model 25 was restarted in 2009. Featuring a spring feed mechanism and modeled after a pump action shotgun with pumped cocking, the Model 25 dominated the low price, higher performance airgun market for over 50 years (1914–1978).

The Powerline models are Daisy's more powerful, more accurate line of airguns, marketed to youth ages 16 and over, and adults. The Powerline rifles include multi-pump pneumatics and spring-piston break barrels, have rifled barrels designed for shooting pellets, and are capable of greater velocities than the youth line. Powerline pistols are multishot double action designs, powered by CO2 powerlets. BB models are smoothbore, while pellet models have rifled barrels. These are styled to resemble firearms, and are often used by adults in place of firearms for inexpensive training and practice, or in jurisdictions where firearms are heavily restricted or prohibited.

The Avanti line consists of Daisy's target guns. These are pellet guns, either single stroke pneumatic or CO2 powered, with high quality sights and built to much higher standards. Some models use barrels from Lothar Walther, a top European barrel maker. Even the least expensive Avanti model, the 717 pistol, has been used by world championship 10 m Air Pistol shooter Don Nygord to shoot a medal winning round in a California state championship. The Canadian Forces adopted the Daisy/ Avanti model 853C target rifle for their cadet program's marksmanship training program, as well as competitive 10m target shooting.

Daisy also makes, as part of the Avanti line, the model 499, billed as the "world's most accurate BB gun". This is a true competition BB gun, with target iron sights, and a precision bored smooth barrel, to be used only with Daisy's precision ground steel BBs that are special made for the 499. The 499 is unusual in that it is a single shot, muzzleloading spring airgun. The 499 is most commonly used in 5-yard (4.6 m) BB gun competitions by youth groups such as 4H and Boy Scouts.

During the Vietnam War Daisy BB guns were used in Quick Kill training for soldiers in basic training.

Daisy also sells a line of spring-air rifles marketed under the Winchester Repeating Arms brand name. These are moderately priced break-barrel designs with wood stocks, with velocities ranging from 500 ft/s (150 m/s) to 1,000 ft/s (300 m/s). For a time, Daisy also imported and marketed an Umarex made, Winchester branded copy of the Winchester 1894 rifle. This is a multi-shot CO2 pellet rifle using the standard Umarex revolver action. This model is now marketed under the Walther name.

In 1988 Daisy briefly made a line of rimfire rifles, the Legacy rifle. These were bolt action rifles chambered in .22 Long Rifle, and were available in a number of different styles. Options were wooden stock or plastic stock with adjustable buttplate, and single shot, 7 shot box magazine, or 10 shot rotary feed (the magazine was similar to, but not interchangeable with, the Ruger 10/22). While these are very rare, the inexpensive construction and the fact that they are firearms, not airguns, has led to little collectors' interest.

Daisy was the first company to introduce a production caseless ammunition and rifle, the V/L Rifle, in 1968. The V/L ammunition consisted of a .22 caliber bullet with a small disk of propellant on the back, and no primer. The rifle resembled a typical spring-air rifle, but the hot, high pressure air served not only as a power source but also to ignite the propellant on the back of the V/L cartridge. The V/L guns and ammunition were discontinued in 1969 after the BATF ruled that they constituted a firearm, and Daisy, which was not licensed to manufacture firearms, decided to discontinue manufacture rather than become a firearms manufacturer. About 23,000 of the rifles were made before production ceased.

Daisy was the defendant in a lawsuit after a Pennsylvania teenager, John Tucker Mahoney was accidentally shot in May 1999 when a friend fired one of their BB guns at him, believing it to be empty. This left him severely brain damaged. The lawsuit alleged that the company hid manufacturing defects, specifically the BB guns jamming, and demanded that the gun in question be recalled. The company settled the lawsuit with Mahoney's family for $18 million in a case that received worldwide publicity.[2][3] Mahoney died of his injuries in October 2003.[4]