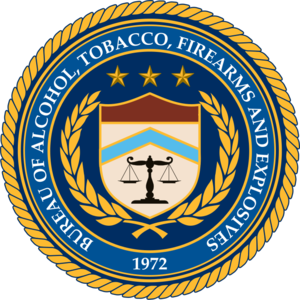 The agency is led by Michael J. Sullivan, Acting Director

The ATF was formerly part of the , having been formed in 1886 as the "Revenue Laboratory" within the Treasury Department's Bureau of Internal Revenue. The history of ATF can be subsequently traced to the time of the revenuers or "revenoors" [ [http://www.atf.gov/about/atf30anniv.htm ATF Online - Press Release - 30th Anniversary of ATF ] ] and the , which was formed as a unit of the Bureau of Internal Revenue in 1920, was made an independent agency within the Treasury Department in 1927, was transferred to the Justice Department in 1930, and became, briefly, a subordinate division of the FBI in 1933.

When the was ed in December 1933, the Unit was transferred from the Department of Justice back to the Department of the Treasury where it became the Alcohol Tax Unit of the Bureau of Internal Revenue. Special Agent and several members of "Untouchables", who had worked for the Prohibition Bureau while the Volstead Act was still in force, were transferred to the ATU. In 1942, responsibility for enforcing federal firearms laws was given to the ATU.

In 1968, with the passage of the Gun Control Act, the agency changed its name again, this time to the Alcohol, Tobacco, and Firearms Division of the IRS and first began to be referred to by the initials "ATF." In 1972, President Richard Nixon signed an Executive Order creating a separate Bureau of Alcohol, Tobacco, and Firearms within the Treasury Department. oversaw the transition, becoming the bureau's first director, having headed the division since 1970. During his tenure, Davis shepherded the organization into a premier agency targeting political terrorists and organized crime. [ [http://www.washingtonpost.com/wp-dyn/content/article/2008/01/10/AR2008011003831.html?nav=hcmodule Rex Davis, 83; ATF Ex-Chief, Moonshiner's Foe, Washington Post, 11 January 2008] ]

In the wake of the terrorist attack on the on September 11, 2001, President George W. Bush signed into law the of 2002. In addition to creating of the , the law shifted ATF (and its investigative and regulatory inspection functions) from the Treasury Department to the Justice Department. The agency's name was changed to Bureau of Alcohol, Tobacco, Firearms, and Explosives. However, the agency still was referred to as the "ATF" for all purposes. Additionally, the task of collection of federal tax revenue derived from the production of tobacco and liquor products originally handled by ATF was transferred to the newly established (TTB), which remained within the Treasury Department. These changes took effect January 24, 2003.

ATF, as a bureau, consists of several different groups that each have their own respective role. Special Agents are empowered to conduct criminal investigations, defend the United States against international and domestic terrorism, and work with state and local police officers to reduce violent crime on a national level. ATF Special Agents have some of the broadest authority of any federal agency, as ATF Special Agents are empowered by 18 USC 3051 to enforce any violation of Federal law under any statute in the United States Code. Specifically, ATF special agents have lead investigative authority on any federal crime committed with a firearm or explosive, as well as investigative authority over regulatory referrals and tobacco trafficking. ATF special agents also often enforce violations of the Uniformed Controlled Substances Act, and have the statutory authority to conduct narcotics cases independently of the or any other agency. ATF Special Agents consistently rank at the top or near the top of all federal agencies in cases referred for prosecution, arrests made, and average time per defendant on an annual basis. [http://trac.syr.edu/tracatf/trends/v04/agenmedtimeG.html] Special Agents currently comprise around 2,400 of the Agency's approximately 5,000 personnel.

ATF Inspectors and Investigators are charged with regulating the gun and explosive industry. These men and women are not armed law enforcement officers but have administrative authority to search and conduct inspections, as well as to suspend and revoke Federal Firearms Licensee's who are in violation of Federal law.

The remainder of the Bureau is personnel in various staff roles from office administrative assistants to intelligence analysts and electronic specialists. Additionally, ATF relies heavily on state and local task force officers to supplement the Special Agents and who are not officially part of the ATF roster.

ATF Special Agent hiring is fiercely competitive, comparable to the selection process of other Special Agent positions in sister agencies. Typically far less than 5% of qualified applicants- those possessing at minimum a four year degree and competitive work experience (which is usually four or more years at a local or state police department) are eventually hired. ATF's hiring process has a nondisclosure agreement so the specific details of the process are not completely revealed, however applicants must pass a rigorous background check in order to achieve, at minimum, a top secret clearance. In addition to the background check agents must pass written tests, multiple physical fitness tests, interviews and medical exams to even be considered to be selected for training.

With the passage of the (OCCA) in 1970, ATF took over the regulation of explosives in the United States, as well as prosecution of persons engaged in criminal acts involving explosives. One of the most notable investigations successfully conducted by ATF agents was the tracing of the car used in the , which led to the arrest of persons involved in the conspiracy.

Two incidents in the early 1990s brought criticism to the agency, as well as to the Federal Bureau of Investigation, specifically the FBI's Hostage Rescue Team and the U.S. Marshals.

The first incident occurred on August 21, 1992, in northern and is known as the incident. US Marshals seeking to arrest for failing to appear in court to answer charges relating to selling an illegally shortened sawed-off shotgun, shot and killed his son, Samuel and wife, Vicki. The incident has become a lightning rod for legal activists within the gun rights community.

The second incident was the of the community in on February 28, 1993 when ATF agents attempted to execute a federal search warrant on the cult's compound, known as Mt. Carmel. The Branch Davidians were alerted to the upcoming warrant execution and ambushed the agents as they arrived at the compound. The Branch Davidians opened fire on the agents, the exchange of gunfire left six Davidians and four ATF agents dead. The Federal Bureau of Investigation took over the scene and a 51 day stand off ensued ending on April 19, 1993, when after the FBI introduced tear gas into the main building on the compound a fire engulfed the whole structure. The follow up investigation revealed the bodies of seventy six people including twenty children. Post morteum examinations of the bodies showed that a number of the victims were shot in the back or in the head at close range and that few if anyone died as a result of the fire. Although a grand jury found that the deaths were suicides or otherwise caused by people inside the building, widespread accusations of excessive force by law enforcement persist. [David Thibodeau. [http://www.salon.com/news/feature/1999/09/09/waco/ The Truth About Waco] . Salon.com]

A more recent criticism of the agency involves , a veteran, living in , who was sentenced to 30 months in federal