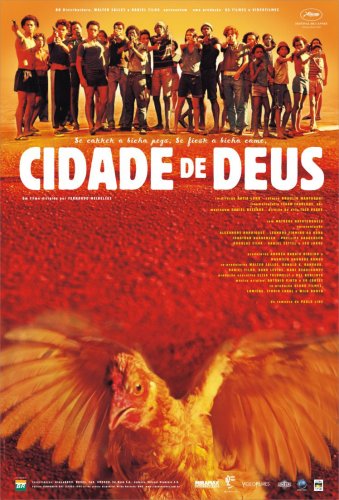 
"City of God" ( _pt. Cidade de Deus) is a 2002 Brazilian crime drama directed by and , released in its home country in and worldwide in 2003. It was adapted by Bráulio Mantovani from the 1997 novel of the same name written by which are both based on a true storyFact|date=May 2008; the war between Knockout Ned and Li'l Zé is based on their real life counterparts Fact|date=May 2008. It stars , , Jonathan Haagensen, and . The tagline is "Fight and you'll never survive..... Run and you'll never escape."

Most of the s were, in fact, residents of s such as Vidigal and the itself. Fact|date=May 2008

The film received four Academy Award nominations in 2004: Best Cinematography (César Charlone), Best Directing (Meirelles), Best Editing (Daniel Rezende) and Best Writing (Adapted Screenplay) (Mantovani). Before that, in 2003 it had been chosen to be Brazil's runner for the , but it was not nominated to be one of the five finalists.

Meirelles and Lund went on to create the TV series and film "City of Men", which share some of the actors (notably leads and ) and their setting with "City of God".

Taking place over the course of over two decades, "City of God" tells the story of "" (Portuguese for City of God), a lower class quarter west of . The film is told from the viewpoint of a boy named Rocket ("Busca pé" in Portuguese) who grows up there as a 's son, and demonstrates the desperation and violence inherent in the slums. Based on a real story, the movie depicts drug abuse, violent crime, and a boy's struggle to free himself from the slums' grasp.

The movie begins cinematically depicting chickens being prepared for a meal. A chicken escapes and as an armed gang chases after it bumps into Rocket who believes that the gang wants to kill him. The movie then flashes back ten years earlier, to tell the story of how he got himself into that position.

Three "hoodlums", "The Tender Trio", one being Rocket's brother, Goose, are terrorizing local businesses with armed holdups. In Robin Hood fashion they split part of the loot with the citizens of City of God and are protected by them. Li'l Dice is a hanger-on who convinces them to hold up a motel and rob its occupants. Li'l Dice ("Dadinho" in Portuguese), serving as lookout, fires a warning shot, then proceeds to slaughter the inhabitants. The massacre brings on the attention of the police forcing the three to quit their criminal ways. Each meets an untimely end, except one who decides to join the church. Goose, Rocket's brother, is slain by Li'l Dice after robbing the younger boy and his friend Benny who have been hiding out and committing crimes themselves.

The movie fast forwards a number of years. Li'l Dice now calls himself Li'l Zé ("Zé Pequeno" in Portuguese), and, along with his childhood friend Benny, he establishes a drug empire by eliminating all of the competition except for a drug dealer named Carrot ("Cenoura" in Portuguese). Meanwhile, Rocket has become a part of the "Groovies" a -like group of youth that enjoy smoking pot. He begins his photography career shooting his friends, especially one girl that he is infatuated with, but who is dating another boy.

A relative peace has come over City of God under the reign of Li'l Zé who plans to eliminate his last rival, Carrot, against the judgment of his best friend Benny, who is keeping the peace. At one point, his best friend and partner in crime Benny has decided to become a "playboy" and becomes the "coolest guy in City of God". Eventually, along with the girl that he has wooed away from Rocket, he decides to leave the criminal life behind to live on a farm. However, he is gunned down at his going away party by former drug dealer, Blackie, who is actually aiming for Li'l Zé. Benny was the only thing keeping Li'l Ze from taking over Carrot's business, so now Carrot is in danger.

Li'l Zé humiliates a peace loving man Knockout Ned at the party and afterwards rapes his girlfriend and kills Ned's uncle and younger brother. Ned turns violent and sides with Carrot. After killing one of Li'l Ze's men, Ned starts a war between the two rival factions that creates a "Vietnam" of City of God. Jealous of Ned's notoriety in the newspapers, Li'l Zé has Rocket take photos of himself and his gang which, unknown to Rocket, are taken by a reporter and published in the daily paper. Rocket then mistakenly fears for his life believing that Li'l Zé will want to kill him for it. In actuality, Li'l Zé is pleased with his newfound fame.

Coming full circle, Rocket is startled by Li'l Zé's request that he take a picture of the gang which had been chasing the chicken at the beginning of the film. Before he can, however, a gunfight ensues between the two gangs, but is broken up by the police. Ned is killed by a boy who has infiltrated his gang to avenge his father, who was killed by Ned during a bank robbery. Li'l Zé and Carrot are arrested and Carrot is taken away to show to the press. Li'l Zé is shaken down for money, humiliated and finally released, all of which is secretly photographed by Rocket. After the cops leave, the Runts (a gang of young children who robbed and terrorized the local merchants) come upon Li'l Zé and shoot and kill him in retribution for him killing one of their gang earlier in the film. Rocket takes pictures of Li'l Zé's dead body and goes to the newspaper.

Rocket is seen in the newspaper office looking at all of his photographs through a magnifying glass, and deciding whether or not to put the pictures of the crooked cops in the newspaper, or the picture of Ze's dead body. The photos of the cops would make him famous but put him in danger, while the photos of Li'l Zé would guarantee him a job at the paper. He decides to take the safe route and gives the paper the picture of Li'l Zé's bullet-ridden body, which runs on the front page.

The story ends with the Runts walking around the City of God, making a hit list of the dealers they plan to kill to take over their drug business.

On the "City of God" bonus DVD, it is revealed that the only professional actor with years of filming experience was Matheus Nachtergaele, who played the supporting role of Carrot. Most of the remaining cast were from real-life favelas, and in some cases, even the real-life City of God favela itself. From initially about 2000, about a hundred children and youths were hand-picked and placed into an "actors' workshop" for several months. In contrast to more traditional methods (e.g. studying theatre and rehearsing), it focused on simulating authentic street war scenes, such as a hold-up, a scuffle, a shoot-out etc. A lot came from , as it was thought better to create an authentic, gritty atmosphere. This way, the inexperienced cast soon learned to move and act naturally.

Prior to "City of God", the directors Lund and Meirelles filmed a short film "Golden Gate" as a sort of test runFact|date=May 2008. Only after then, the final casting for "City of God" was finalizedFact|date=May 2008. The most remarkable choice was Leandro da Hora as Zé Pequeno, as da Hora was unanimously described as a quiet, uncomplicated soul, but now played the psychotic, ultra-violent drug dealerFact|date=May 2008. Da Hora himself describes his character as "pretty unbalanced, greedy and acted without thinking in everything he did (...) I see him like a normal person, but someone who through the ironies of destiny took a wrong turn somewhere." Fact|date=May 2008

Appropriately, the film ends eavesdropping on the machinations of the "Runts" as they assemble their death list. The real gang, "Caixa Baixa" (rat boys), is rumored to have composed such a list. [http://cidadededeus.globo.com/]

"City of God" became the highest-grossing foreign film of 2003 in the United States.Fact|date=July 2008 It has grossed over 7 million dollars in the U.S. and over 27 million worldwide. [ [http://www.boxofficemojo.com/movies/?id=cityofgod.htm "City of God"] at .]

"City of God" received impressive positive acclaim from major publications in the United States, gathering 92% of favourable reviews on . [ [http://www.rottentomatoes.com/m/city_of_god/ "City of God"] at .] "Empire" chose it as the best film of 2003 and "Time" chose it as one of the 100 greatest movies of all time, while ranked it the 3rd "movie to see before you die".

According to the , [ [http://www.imdb.com/title/tt0317248/awards Awards and nominations for "City of God"] at the .] "City of God" won forty-eight awards and received other twenty-one nominations. Among those:

* as "Buscapé" (Rocket, more specifically a firecracker flying erratically at foot-height before exploding, hence "Busca-Pé = foot-searcher")
* as Angélica
* as "Tio Sam" or Charles ("Uncle Sam")
* as "Paulista" (Paulista, a native of the state of )
* as Thiago
* as "Paraíba's" neighbor
* as "Filé com Fritas" ("Steak with Fries")
* as "Dadinho" ("Li'l Dice" &mdash; Zé Pequeno as child)
* as "Busca-pé’s" father
* as "Barbantinho" ("Little String")
* as "Barbantinho" (as a child)
* as Rafael
* as "Paraíba" (Paraíba, in Rio de Janeiro it is a vulgar form of addressing someone from Northeastern Brazil - where the state of is located)
* as Marina Cintra
* as "Alicate" ("" - known as "Clipper" in the English version)
* as "Cabeleira" ("Big Hair" - known as "Shaggy" in the English version)
* as “Paraíba’s” wife
* as "Lúcia Maracanã"
* as "Zé Pequeno" ("Little Zé - a common abbreviation for the name "José")
* as "Busca-Pé" (as a child)
* as "Touro" ("Bull")
* as Otávio
* as "Sandro Cenoura" ("Carrot")
* as "Cabeção" ("Big Head")
* as "Bené" (as a child)
* as the Motel’s receptionist
* as "Tuba" (the musical instrument)
* as "Bené" (a common abbreviation for the name "Benedito")
* as "Marreco" ("Goose". In Portuguese, "Marreco" is a kind of duck but can also be used as a slang for a person who can be easily fooled)
* as Berenice
* as Gelson
* as "Neguinho" (“Blacky”)
* as "Galinha’s" wife
* as "Mané Galinha" ("Knockout Ned" in the English version - literal translation: "Chicken Manny" – does not imply a coward in Portuguese slang, but usually means "Womanizer". "Mané" is short for "Manuel", a common name in Brazil.)
*Thiago Martins as "Lampião" (“Lamp”, the name of a famous violent criminal, leader of a criminal group, that lived by the beginning of 20th century in the semi-arid fields in the Northeast of Brazil and is still admired by some regionals)

The score to the film composed by Antonio Pinto (and his partner ) was followed by two albums. Songs from the film:

* [http://cidadededeus.globo.com/ Official site]
*
* [http://www.nosdocinema.org.br/mambo/index.php?option=com_content&task=view&id=27&Itemid=60 Nós do Cinema behind City of God]
* [http://www.metacritic.com/video/titles/cityofgod Metacritic: "City of God"]
* [http://news.bbc.co.uk/2/hi/americas/6182752.stm "Short lifespan in Rio drug gangs"] , from BBC, 25 November 2006.
* [http://www.metamute.org/en/Slumsploitation-Favela-on-Film-and-TV Article in that is critical of the representation of favelas and favelados in City of God and other Brazilian cinema and television] ]