The Millcreek Mall or Millcreek Mall Complex is a one-level shopping center located 3.4 miles southwest of downtown Erie, Pennsylvania, between Peach Street and Interstate 79, in Millcreek Township. The center is often cited as being the third-largest shopping mall in the United States.

The complex opened in 1975 and was developed by the Youngstown, Ohio-based Cafaro Company, who still own and operate it. Due to Pennsylvania's lack of sales tax on clothing, the Millcreek Mall attracts many visitors from Ohio, New York and Canada. Presently, the mall proper houses 121 store spaces, with 12 kiosks. The 175 store and restaurants figure often cited includes stores within the physical mall and its many peripheral restaurants, stores and strip plazas.

The mall's original anchor stores included Boston Store, Halle's, JCPenney, Kaufmann's and Carlisle's and Sears. Boston Store became Horne's in 1979, which in turn closed and became Lazarus in 1994. Lazarus closed this anchor in 1997.[2] Halle's later became a Dahlkemper's catalog showroom, which closed in 1993.[3] Its space became Burlington Coat Factory. HomePlace took the former Carlisle's location after Carlisle's closure in 1995.[4] Elder-Beerman took over the former Lazarus in 1998, but was converted five years later to The Bon-Ton. After HomePlace closed, its space was divided between Steve & Barry's and AC Moore, the former of which closed in 2009. Also, Kaufmann's was converted to Macy's in September 2006. 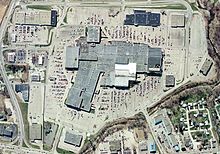 Aerial photo of the mall

The combination of anchors has given it the shape of a gun pointed at downtown Erie when viewed from above. This has resulted in an urban legend which states that the mall was intentionally built that way under the direction of the mafia.[5]

On March 27, 2008, it was announced that the mall would receive a multi-million dollar renovation. Among the new additions to the mall are a children's area, a food court, and renovated entrances to the building. The mall also got skylights, porcelain floors, a new west side entrance, and new parking lot lights. The food court opened in late 2008.

Outside the Millcreek Mall

The mall property is also home to several restaurants including Max & Erma's, Smokey Bones Barbeque and Grill, Outback Steakhouse, The Fox and Hound Pub, Red Lobster, Arby's and Aoyama Japanese Steakhouse, which is located in a former Chi-Chi's.

A Homewood Suites, TownePlace Suites and a Fairfield Inn also sit on the property. The former Blair store, has been converted into the Erie Institute of Technology (EIT). The Hills / Ames department store, which sat empty for over five years, became All Seasons Market Place & Flea Market [1], an eclectic mix of stores with new and used items. Also on the property is Cinemark 6, a discount movie theater.

A Men's Wearhouse, OfficeMax, David's Bridal, Ollie's Bargain Outlet, and many smaller stores also occupy land on the site of the Millcreek Mall.

Across the street from the Millcreek Mall, the land that was once woods, has recently begun to experience a major change. On the land there are four restaurants; O'Charley's, Moe's Southwest Grill, Buffalo Wild Wings, and McDonald's, a SpringHill Suites hotel, PNC Bank, and a Verizon Wireless store.