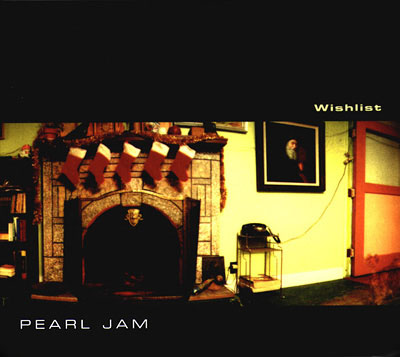 "Wishlist" was written by frontman . Vedder used an for his guitar solo on the song. Vedder about the song:

It was a stream-of-consciousness exercise. [Mike] McCready booked studio time in a tiny studio here with our friend Stu behind the board and another friend playing drums. We don't have the discipline to sit down and teach each other parts, so you're writing simple chord changes that someone else can follow without having to take breaks to learn them. It was probably eight minutes long originally. I listened to the tape and picked out the better wishes. [ [http://www.twofeetthick.com/tft/readArticle.action?id=62 Interview with Eddie Vedder] . Microsoft MusicCentral. February 1998.]

The song is about Vedder seeking fulfillment of wishes desired, but he resolves his wishlist with the line "I wish I was as fortunate, as fortunate as me." When asked about the song, Vedder stated, "I thought I'd lighten up." [Macdonald, Patrick. [http://archives.seattletimes.nwsource.com/cgi-bin/texis.cgi/web/vortex/display?slug=2732054&date=19980202&query=%60Yield%27+Signals+Pearl+Jam%27s+Return+To+Rock+Of+Old "Yield" Signals Pearl Jam's Return To Rock Of Old"] . "". February 2, 1998.] The line "I wish I was the full moon shining off your Camaro's hood" references the car that belonged to , Vedder's wife at the time. [Marsh, Dave. [http://web.archive.org/web/20000301045735/www.addict.com/issues/4.02/html/lofi/Cover_Story/Pearl_Jam/page_12.html "Pearl Jam's New Day Rising"] . Addicted to Noise. February 1998.]

Outside of the United States, the single was released in , , , and the . "Wishlist" reached the top 30 in the UK and peaked at number 48 on the Australian Singles Chart.

The song was premiered live at the band's November 12, 1997 concert in Santa Cruz, . [ [http://pearljam.com/songs/song.php?song=Wishlist "Pearl Jam Songs: "Wishlist""] . pearljam.com.] The band played this song when it appeared on the "" in May 1998 in support of "Yield". In concert, the song is often extended with an extended, softly played, thoughtful outro jam, sometimes segueing into another song such as the ' "Why Can't I Touch It". Performances of "Wishlist" can be found on the DVDs "", "", and "".