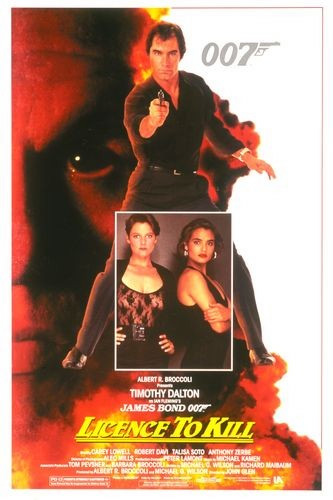 "Licence to Kill" (1989), directed by John Glen, is the 16th James Bond , and the second and last featuring . "Licence to Kill" is the first, original (non-Fleming) title, that adapts the "Live and Let Die" story with elements from the short story "The Hildebrand Rarity", concerning agent 007's resignation from to pursue revenge against Franz Sánchez, a Latin American drugs baron. The title refers to Bond's discretionary licence to kill; originally, the title was "Licence Revoked".

Given screenwriter Richard Maibaum had died, and internecine lawsuits over ownership of the film series, this was the last film for six years, the series' longest interval, and the last film by producer .

The story opens with Bond and his friend, CIA agent , on their way to Leiter's wedding to Della Churchill. Meanwhile, DEA agents spot drug lord flying near , and a Coast Guard helicopter collects Leiter and Bond in an attempt to capture Sanchez. They capture Sanchez by attaching a hook and cord to Sanchez's plane and pulling it out of the air with the helicopter. The two parachute to the wedding.

Later that day, bribed DEA agent Ed Killifer assists Sanchez in escaping. On their honeymoon night, Leiter and Della are captured by Sanchez's henchmen; Leiter is fed to a shark as his wife is raped and killed. After hearing the news of Sanchez's escape, Bond returns to Leiter's house to find Della dead and Felix alive but severely injured.

Bond begins his revenge by killing Killifer, causing him to fall into the same tank with the shark that maimed Leiter. M meets Bond in Key West's Hemingway House and orders him to an assignment in , . Bond refuses the assignment and subsequently resigns. M accepts his resignation and immediately revokes his licence to kill. Bond quickly escapes MI6 custody and becomes a , bereft of official backing but later surreptitiously helped by armourer Q. Bond boards a ship run by Milton Krest, Sanchez's key lieutenant, where he ruins Sanchez's latest drug shipment and steals five million dollars. In Leiter's records, Bond finds details of a rendezvous in Bimini with , an ex-CIA agent-pilot, who he recruits to his mission.

Bond journeys to the n country of the "Republic of Isthmus" (a fictional country loosely based on , which is known for its ), where he finds his way into Sanchez's employ by posing as an assassin looking for work. With the aid of Bouvier and Q, he frames Krest, making him appear disloyal to Sanchez. Sanchez traps Krest in a and then suddenly depressurises the chamber, causing Krest's head to explode; meanwhile, for Bond's perceived loyalty, Sanchez permits him into his inner circle of friends.

After an overnight stay at his villa, Sanchez takes Bond to his base, disguised as a meditation retreat. Bond learns that Sanchez's scientists can dissolve cocaine in gasoline, and then sell it disguised as fuel to Asian drug dealers. The buying and selling are conducted via the American Professor Joe Butcher, working under orders from Sanchez's business manager Truman-Lodge. The re-integration process will be available to those underworld clients who can pay Sanchez's price. In addition, Sanchez has brokered a deal to buy Stinger missiles from the , and has threatened to shoot down an American airliner if the DEA interferes in his operations. Unfortunately for Bond, he is recognised by Dario as an informer; though Bond does manage to start a fire in the laboratory, his henchmen capture Bond. Sanchez orders Bond be placed on the conveyor belt that drops the brick- into a giant shredder and leaves with his men. Pam Bouvier arrives (posing as a follower of Professor Butcher) and helps Bond escape; during his escape, Bond kills Dario by pulling him on to the conveyor belt and Dario falls into the shredder. Pam and Bond quickly escape the base as it explodes. Sanchez escapes with four tanker trucks full of the cocaine/gasoline mixture and his Stinger missiles, and Bond pursues them by plane (with Bouvier at the controls).

Through Bond's actions, he cleverly manages to destroy three of the four trucks' tanks. An irate Sanchez kills Truman-Lodge when he mocks Sanchez about the money he's just lost. Bond and Sanchez fight aboard the final remaining tanker, which ends up out of control and then rolls down a hillside. Sanchez, soaked in gasoline, mocks Bond, telling him that he could have "had it all", and prepares to kill the prone Bond with a machete. Bond distracts him by asking him if he wants to know why he did it, producing the cigarette lighter that was the Leiters gift for being the best man at their wedding — so showing Sanchez his true motive in destroying his drug empire — and proceeds to set the villain afire. Sanchez, burning alive, stumbles into the wrecked tanker truck's cistern, causing its gasoline to ignite. Bond flees before the massive explosion. Pam arrives driving one of the two remaining trucks and drives them back to Isthmus City.

That night, a party is held at Sanchez's residence. Bond receives a call from Leiter telling him that M is offering him his job back. As Q and Pam share a drink, Lupe thanks Bond for everything and kisses him. Pam notices them and goes downstairs, upset. Bond looks over the , and tells Lupe that he thinks she and El Presidente will make a perfect couple. With that, Bond flings himself over the balcony and lands in the pool, surprising Pam. He pulls her into the pool and Lupe, El Presidente and Q walk away respectively. Pam asks Bond what he asked her earlier in the film, "Why don't you wait until you're asked?" Bond responds with what she said, "So why don't you ask me?" They kiss, and the credits roll over a beautiful view of Isthmus City (in reality ).

* as James Bond: An agent, has his Double-O status revoked.
* as : An ex-Army pilot and informant.
* as : The most powerful drug lord in Latin America, mentioned as having been wanted by the for years.
* as : Sanchez's girlfriend.
* as Milton Krest: Sanchez's henchman who operates Wavekrest Marine Research.
* as Sharkey: Friend of Felix Leiter and owns a boat charter business.
* as : A corrupt DEA official, working for Sanchez.
* as Professor Joe Butcher: Sanchez's middleman and TV evangelist for Olimpatec Meditation Institute.
* as Dario: One of Sanchez's henchmen.
* as Truman-Lodge: Sanchez's financial advisor.
* as Q: Supplies Bond with various gadgets and helps him on the field.
* as : Former CIA agent, now with DEA.
* as : Felix Leiter's bride.
*Robert Brown as M: Head of MI6, revokes Bond of his Double-O licence.
* as : M's personal secretary.
* as Colonel Heller: Sanchez's head of security.
* as : DEA Agent and Bond ally.

Much of the film was shot in in and the . In the film the Republic of Isthmus was a fictional South American country, based on . Mexico was used to double for this location. Shooting ran from , 1988 to November 1988.

In Mexico City locations included the Biblioteca del Banco de Mexico for exterior of "El Presidente Hotel" and the Casino Español for the interior of "Casino de Isthmus" whilst the Teatro de la Ciudad was used for its exterior. was used as a sound stage and production base. Villa Arabesque was used for Sanchez' lavish villa which was filmed in , and the La Rumorosa Mountain Pass in was used for the filming site of the tanker chase. Sanchez's Olympiatec Meditation Institute was shot at the in . Other underwater sequences were shot at the near .Fact|date=September 2007

In the filming was done primarily in the , notably . towards was used for the armoured truck driving off the edge. Other locations there included , , Mallory Square, St. Mary's Star of the Sea Church for Leiter's wedding and Stephano's House 707 South Street for his house and patio. The Pier was used to film Isthmus City harbour.

"Licence to Kill" is the only James Bond film to date not to have used a film studio in the during production, though post-production and sound re-recording was carried out at . This is also the first Bond film to be rated PG-13 in the US and 15 in the UK; all previous films were PG. Violent scenes had to be trimmed in both the UK and US (albeit somewhat less so) to avoid a higher classification. The uncut version is available in the range.

Initially and were asked to write and perform the theme song to "Licence to Kill". The theme was said to have been a new version based on the . The guitar riff heard in the original recording of the theme was played by Flick. The prospect, however, fell apart and 's song and performance was chosen. The song (one of the longest to ever be used in a Bond film) was based on the "horn line" from "Goldfinger", which required royalty payments to the original writers.

Because John Barry was not available at the time due to the fact he was undergoing throat surgery, the soundtrack's score was composed and conducted by .

Accounting for inflation, "Licence to Kill" is the least financially successful James Bond films in the U.S., although its worldwide income was greater. [cite web | title=Box Office Franchises - James Bond | publisher=Box Office Mojo | url=http://www.boxofficemojo.com/franchises/jamesbond/adjusted.htm | accessdate=2007-05-02] Producer Michael G. Wilson (in the DVD commentary) says the production was difficult because of budget control consequent to the over-spending for "Moonraker", that did not account for inflation. Moreover, changing the filming locations from China to Mexico and the five-month WGA strike, preventing screenwriter Richard Maibaum from completing the script, left the screenplay writing to him (producer Wilson). [cite web | title=Highlights of the WGA's contributions to the arts | publisher=Variety.com | url=http://www.variety.com/article/VR1117881783.html?categoryid=1606&cs=1 | accessdate=2007-05-02]

Producer Broccoli said he disliked the poor marketing of "Licence to Kill", Fact|date=October 2007 which was significantly affected by a late title change. Promotional materials by the artist Robert Peak, based on the "Licence Revoked" title, were inspired by Timothy Dalton's realistic, hard, portrayal of James Bond. The delayed, corrected advertising, by Steven Chorney, in the traditional style, limited the film's pre-release screenings. Moreover, "Licence Revoked" was simplified to "Licence to Kill" because American audiences were ignorant of its meaning, however, in the documentary, "Inside Licence to Kill", narrator says the reason is that to Americans "revoked" denotes lost driving privileges.

The novelisation of the "Licence to Kill" screenplay was the first since "Moonraker" in 1979. Then-current Bond series novelist John Gardner novelised the Michael G. Wilson-Richard Maibaum screenplay — a great challenge, because his stories follow Fleming's continuity (albeit updated); Felix Leiter already had lost an arm and a leg to a shark in the "Live and Let Die" novel, an incident recycled in "Licence to Kill". Resultantly, in the chapter "Lightning Sometimes Strikes Twice", the novelisation requires reader acceptance of Bond dealing with Leiter's twice being maimed by a shark; however, Gardner he does attempt to reconcile the presence of Milton Krest, (who was murdered in "The Hildebrand Rarity" short story).

The relatively faithful novelisation does differ from the script: (i) Bond uses a , not a (as in the film), because SIS had replaced it, a fact in Gardner's Bond novels; (ii) Q has an extra scene (occurring while Bond is at Sánchez's Olimpatec Meditation Institute), wherein he joins a police captain in raiding Sánchez's house. Although he then had written eight Bond novels, the novelisation was Gardner's first work featuring Q.; before "Licence to Kill", Q was heard of, not seen in his novels, having been replaced by his assistant, Ann Reilly, Q'ute. The novelised "Licence to Kill" story occurs before "", wherein Bond is promoted to Captain (in the novelisation and the film, Bond is a Commander).

"Licence to Kill" was adapted as a forty-four page, colour , by writer and artist (also author of original-story Bond comic books), published by and ACME Presss in hardcover and trade editions in 1989. The adaptation closely follows the film story, although the ending is briefer, and James Bond does not resemble Timothy Dalton. [cite web|title=Just Johnny's James Bond Comics Website|url=http://home9.inet.tele.dk/oreskov/eclp-ltk.htm|accessdate=2007-09-30]