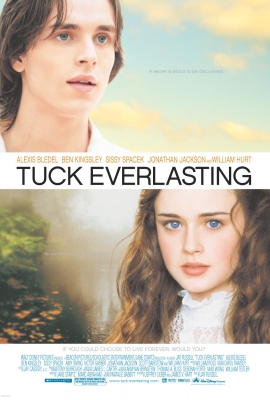 "Tuck Everlasting" is a 2002 film based on the of the same title by published in . The film is a remake of an earlier film from 1981.

This Disney version was directed by .

The story involves the Tucks, a family who drank from a magic spring in the Fosters' forest and became immortal (hence the name "Tuck Everlasting").

In the movie, set in the early 20th century, the protagonist is a 15-year-old girl named Winifred Foster. She comes from a well-bred, straight-laced family and becomes lost in the woods one day during an attempt to escape her smothered lifestyle. In the woods, she encounters the Tuck family, which gained immortality years ago by drinking from a spring. The ultimately puts up an argument for mortality and why it is necessary by using the Tucks as an example.

In the film, Winnie and Jesse fall in love and she has to decide whether to drink from the spring because she aspires to be with him forever. In both the book and film she decides against it. The movie ends with Jesse visiting Winnie's grave in more modern times, sad that she was not with him but also happy that Winnie was not trapped in time like he and his family.

Differences between the movie and the book

* Winnie is fifteen years old in the movie and in the book she is ten.
* In the book, Winnie and Jesse never enter a relationship because she was taken away from him (although it is implied that Jesse wants to, as he urges her to drink from the spring when she's seventeen).

* and had previously starred together in 1976, in "Carrie".
* Much of the movie was filmed in . The town's main street went through a large Hollywood renovation, including covering the streets in dirt, to portray the early 1900's fictional city of Treegap.Fact|date=November 2007
* Many scenes were shot in , specifically at the King and Queen Seat in Rocks State Park, Kilgore Falls, Bulle Rocke, Christ Church Rock Spring, and other locations in Susquehanna State Park.
*Alexis Bledel plays Winnie who is 15 but in real life Alexis was 19 at the time of filming.