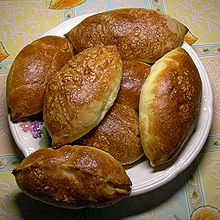 Pirozhki (plural form of pirozhok, Russian: пирожок, пирожки), sometimes transliterated as piroshki (or pyrizhky from Ukrainian: пиріжки), is a generic word for individual-sized baked or fried buns stuffed with a variety of fillings. The stress in pirozhki is properly placed on the last syllable: [pʲiroʂˈkʲi]. Pirozhok (Russian: пирожок, singular) is the diminutive form of the Russian cognate pirog (Russian: пирог), which refers to a full-sized pie. The Russian plural of this word, pirogi (Russian: пироги, with the stress on the last syllable [pʲiroˈɡʲi][dubious – discuss]), is not to be confused with pierogi (stress on "o" in English) in other East European cuisines, which are similar to the Russian pelmeni or Ukrainian vareniki.

A common variety of pirozhki are baked stuffed buns made from yeast dough and often glazed with egg to produce the common golden colour. They may contain sweet-based fillings such as stewed or fresh fruit (apples, cherries, apricots, chopped lemon, etc), jam, or cottage cheese; a vegetable filling (mashed potatoes, mushrooms, onions and egg, cabbage); meat or fish; an oatmeal filling mixed with meat or giblets. The buns may be plain and stuffed with the filling, or else be made in a free-form style with strips of dough decoratively encasing the filling.

Potatoes among American crops became very popular when the vegetable was brought and adopted to the Eurasian climate. Before then, the ingredient was not available as it took more time to acclimatize to continental regions like Russia and Ukraine. Before then, the ingredients would contain more vegetables and fruits, as well as duck, goose and rabbit meat, uncommon today.[citation needed]

The Greek variety piroski (Greek: πιροσκί) is popular in parts of Greece influenced by eastern cuisine and in most big cities, where they are sold as a type of fast food. The Greek piroski come deep-fried with many different stuffings.[1]

Estonians too have this tradition. It is not similar at all to pelmeni, and is not reminiscent of a dumpling. The Estonian pirukas is fairly small in size and is always baked in dough. The Estonian version, with regional variations in respect to fillings, compared to the Latvians, is referred to as "pirukad" ("pirukas" in the singular). Pirukad are sometimes accompanied by bouillon. Many recipes exist, with meat, cabbage, carrots, rice, egg and other fillings and filling mixtures also being used. As a rule, the best ones are homemade. The Latvian bacon and onion version is known to Estonians, but is not as common. Here too, one can encounter sweet fillings, although savory "pirukad" predominate.

Pirozhki are common as fast food on the streets of the Central Asian countries such as Tajikistan, Uzbekistan, Azerbaijan, Turkmenistan, etc., where they were introduced by the Russians. They are also made by many Russians and non-Russians at home.

Pirozhki is also very common as fast food in Mongolia, and it is made throughout the country by families at home.

Southwest Asia and the Caucus Mountians

The Russian variant of Pirozkhi is a common fast food in Iran and Armenia.