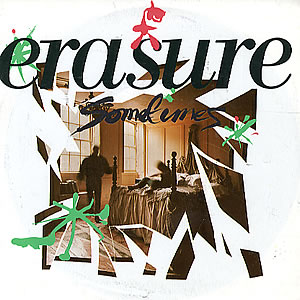 "Sometimes" is a song by British duo , released in October 1986 as their fourth single overall.

After three commercial flops from their debut album "Wonderland", "Sometimes" became Erasure's first bonafide hit, peaking at number one in , number two on the and in , and becoming a huge international hit. The song became Erasure's second Top 5 hit on the U.S. chart, where it peaked at number four.

Written by band members and Andy Bell, "Sometimes" typifies the Erasure "sound" — an uptempo, dance-oriented pop tune accentuated by Clarke's analogue s and Bell's lyrics about being in love. The showcases Erasure on a building rooftop — Clarke playing an acoustic guitar and Bell singing — as they weave through white sheets hanging from a laundry line.

"Sometimes" spent seventeen weeks in the UK singles chart — the duo's longest chart run for a single in that country — and was included on Erasure's second album "The Circus", released six months later in March 1987.