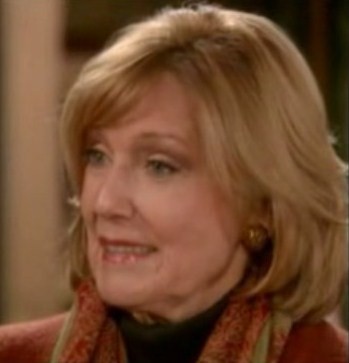 Lucinda Walsh (né Mary Ellen Walters) is a on the "".

Introduced in as a no-nonsense businesswoman (her first action in town was trying to steal Whit McColl's newspaper business), Lucinda has evolved to become a loving mother and grandmother, while still retaining her edge fiery nature.

She was born Mary Ellen Walters; her parents broke up not long after her birth. After living with her father for a while, she ran away to Montega, . She married Montegan Jacobo Estaban and gave birth to a daughter, Sierra.

After the marriage to Jacobo failed, and she was banished from seeing Sierra again, Mary Ellen changed her name to Lucinda and remarried. Her new husband, Martin Guest, arranged for them to illegally adopt a daughter, whom they named Lily. When the truth came out about the method of Lily's adoption, Guest committed suicide. Lucinda tried marriage again with James Walsh, but he died shortly after their marriage.

Upon arriving in Oakdale, Lucinda kept her scandalous past a secret. It was only after a dangerous situation in Montega, involving Sierra and other Oakdale residents, that she revealed the fact that she was Sierra's mother.

Lily had believed that Lucinda was her biological mother for a long time, never knowing of her adoption. After Lily had fallen in love with stable boy Holden Snyder, Lily was shocked to find out that not only was she adopted, but that her mother was Holden's adopted sister, Iva Snyder. Lily and Lucinda remained at odds for years, but eventually repaired their relationship.

She married Dr. John Dixon, but although they had a great deal in common and grew very close, their happiness was short-lived. Lucinda clashed with John's son, Duke, and paid to have someone make him leave town. John found out and divorced her, but they remained close friends.

Lucinda lost Walsh Enterprises to Connor Jamison, who turned out to be Connor Walsh, the long-lost granddaughter of James Walsh. Connor and her brother Evan orchestrated a takeover of Walsh Enterprises. Lucinda bounced back and created her own company, Worldwide Industries.

Lucinda recalled her childhood and her complicated relationship with her mother, Gloria; she learned of Gloria's other children - her half-siblings: brother Royce Keller and sisters Neal Alcott and Samantha Markham. Royce, who suffered from , killed Neal before Lucinda could tell them the truth. Lucinda did, however, accept Samantha as her sister.

After marrying and divorcing James Stenbeck (and being injured due to a complicated scheme of his), she became a single woman yet again.

When Rose D'Angelo, Lily's twin sister who was also illegally adopted at birth, surfaced in Oakdale (and in Lily's life), Lucinda took her under her wing, as sort of an honorary adopted daughter. Rose was subsequently murdered in .

In , Lucinda was diagnosed with breast cancer. Stubborn, she refused to let Sierra and Lily help and support her. She didn't want to be away from Worldwide for too long, so she began to take trips to Mexico with Keith Morrissey, Lily's boyfriend, for experimental treatments.

Lucinda's cancer soon went into remission and Lily left Keith, returning to her true love, Holden. Soon after, Lucinda was the main voice of reason when young drifter Jade Taylor came to town claiming to be Rose's daughter. Lucinda had a feeling that Jade was a fraud, and later on, that proved to be the truth.

Since then, Lucinda has been involved in the life on Lily's son, Luke. She was concerned about Luke's alcoholism and was willing to support him in his decisions while still offering her own brand of tough love. When Luke told his family that he is gay, Lucinda happily accepted her grandson's confession and promised to completely support him.

Soon after Luke's confession, his biological father, Damian Grimaldi, showed up with hopes of luring his son back to his home in Malta. Lucinda, from the very beginning, pegged Damian's intentions as nothing but detrimental to Luke's happiness and called him on it. Damian eventually left town after his schemes were unsuccessful. Since then, Lucinda has floated around town, currently working with Katie Peretti on the publication of the novel "Oakdale Confidential: Secrets Revealed".

In , it was revealed that Lucinda was one of the people involved in helping fake his own death. Which, lead to Lily saying that she wants nothing more to do with her.

* Founder/Owner and CEO of WorldWide Industries. Briefly Owned by and from (2007-2008) under the name Montgomery Enterprises. Lucinda recaptured the company when Meg and Craig divorced and Meg offered to hand the company over. And on Friday 8th February Lucinda officially signed the contracts and regained control of Worldwide. After regaining control of Worldwide, Lucinda felt as though it had too much baggage with it after the whole Evan Walsh fiasco and signed the company over to Paul Ryan.

* Former owner of Walsh Enterprises (stolen from under her by Connor Walsh)
* Former CEO of Worldwide Industries (signed control of the company over to Paul Ryan). Remained as a major stock holder and senior member of the board.