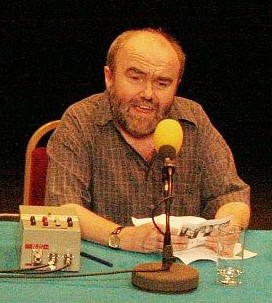 Andrew Neil Hamilton (born 1954) is a British , panellist, director, and for and .

Hamilton was born in , south-west . Despite being born with ten fingers, soon after his birth it was noticed that six of these were on the same hand. At the age of five, his extra thumb was removed; as a result, Andy has no thumb on his right hand.fact|date=September 2008 Hamilton is not a dwarf, despite his diminutive stature.

Educated at a grammar school, Hamilton read English at , where he was a member of the (CULES).

Hamilton first came to major notice whilst performing in the world famous in the 1970s.

On 16 March 2007, he co-presented 's "" programme, alongside usual presenter , as part of that day's Comic Relief fundraising activities, after defeating and in a poll. Hamilton is an occasional guest panellist in "" and on "".

Since 1995, Hamilton has written and played the lead role of in the Radio 4 sitcom "".

Andy is currently touring with his UK stand-up show “Hat of Doom” 2008.

Andy is 5'3 tall, a short stature which has provided jokes on and . He attributes his short height to his mother, who he claims wouldn't feed him adequate vegetables.

Hamilton has written scripts for: